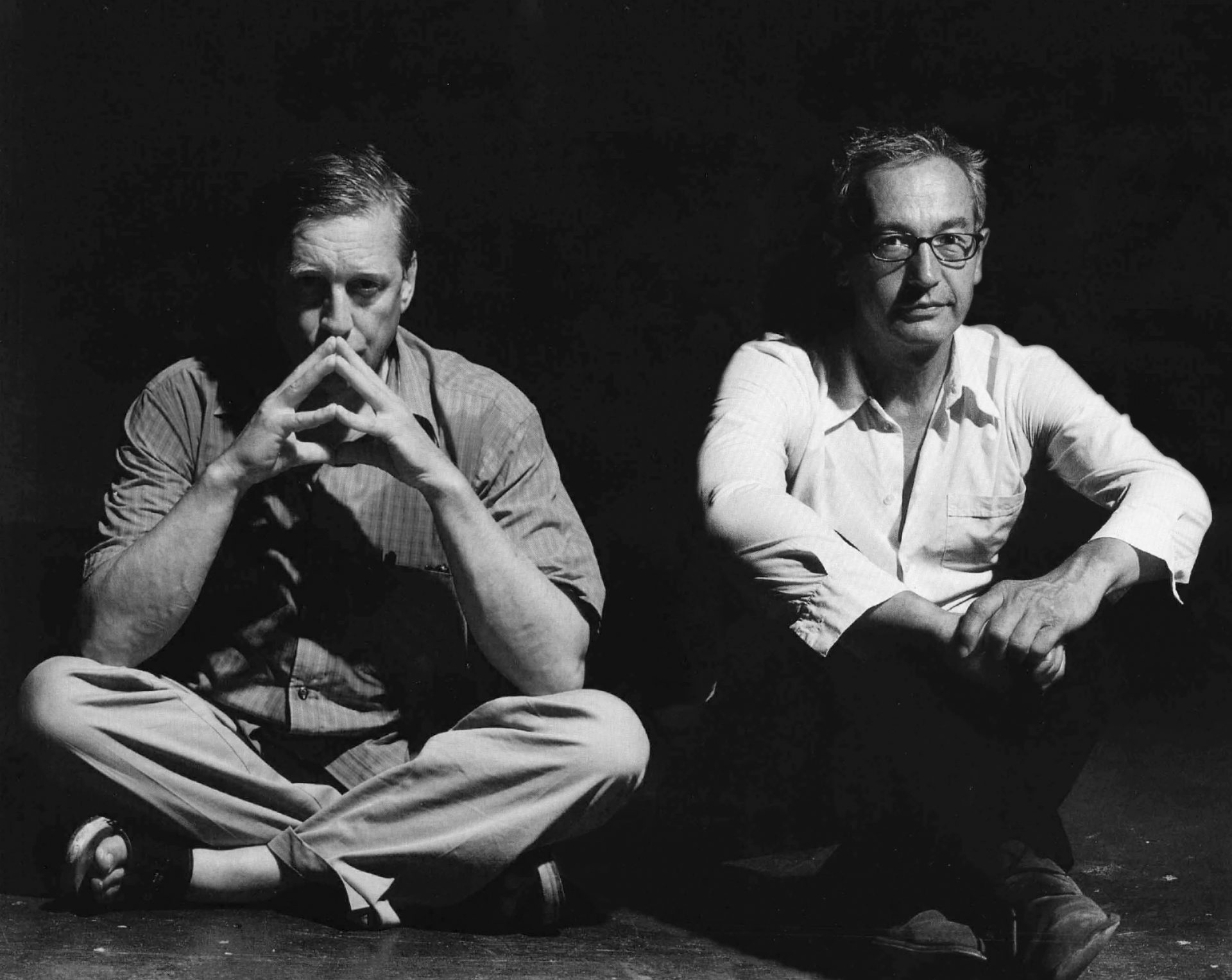 Peter Fischli (*1952) and David Weiss (1946–2012) have created sculptures, videos, site-specific installations, projections and photographs. Their broad conceptual and artistic œuvre engages with the world of everyday life. With wit, subtlety, gentle irony and modesty, they question the mechanisms of artistic authorship, the value-added cycles of the art world, the symbolic value of artworks and the role of the viewer. Peter Fischli has continued the duo’s work alone since the death of David Weiss. The Zurich-based artists have been associated with the gallery since 1983.

Fischli and Weiss often place particular focus on the seemingly banal. Their work distances itself from the materials and practices typical of contemporary art, turning instead to such distinctly non-professional artistic techniques as hobby sculpture, tourist photography, or recreational crafts and tinkering. One example is their Sausage Series (1979), for which Fischli and Weiss gleefully, almost childishly, turned an array of meat products, sausages, and cocktail gherkins into the protagonists of absurd narratives. Another is Suddenly this Overview (1981), which consists of two hundred small, “amateurishly” hand-sculpted figurines made of unfired clay depicting imaginary, deeply humorous scenes inspired by historical events, popular culture or the lives of the two artists themselves. Their film The Point of Least Resistance (1980/81) stars a costumed Fischli and Weiss performing as their alter egos Rat and Bear. The plot follows a bizarre sequence of events in their quest to “make it big” in the art world.

For their photo series Equilibres (1984–86), the artist duo arranged everyday objects into imaginative, precariously-balanced, temporary constructs that seemed destined to collapse at any moment. That idea became the basis for The Way Things Go (1987), a film where the fragile set-ups actually do collapse in moments of ecstatic release. Arrangements of car tires, garbage bags, chairs, plastic bottles, candles, balloons, and other objects are set in motion by a startling causal chain that creates a kind of garage domino effect—the hypnotic illustration of a playful, everyday philosophy.

For their influential project Questions (2000–2003), the artists projected philosophical, humorous and absurd questions onto exhibition walls. Series such as Visible World (1987–2001) or Flowers and Mushrooms (1997–2006) show the artists turning to photographic motifs and techniques that are often used by hobby photographers. Some of the duo’s most influential works include carved, astonishingly real-seeming polyurethane replicas of commonplace objects and studio utensils such as paint buckets, bottles, product packaging, sinks, or rubber boots. The simulated, phantom-like readymades not only turned the logic of the readymade on its head, they also appeared together in installations showing fictitious archives of alien memories and the everyday designs of bygone eras.

Peter Fischli and David Weiss’s works are the result of a complex, rigorous and disciplined studio practice. Their engagement with the ordinary thrives on references to art and philosophy, but also precise social reflection. The artists ultimately use their sophisticated strategies of exposed mediocrity to expertly re-perform our day-to-day lives and make them visible in a new way. Their work challenges viewers to rediscover what they believe they already know—and in doing so to come to recognize the seemingly insignificant trivialities that have been sedimented in our collective pre-consciousness and are more meaningful than one likes to think.

Peter Fischli  David Weiss
Rock on Top of Another Rock, 2012

Rock on Top of Another Rock, 2012
Stone (rocks)
Dimensions variable

Rock on Top of Another Rock, 2012
Stone (rocks)
Dimensions variable

Your message has been sent.
Current and Upcoming

Kino Süd is an online artist video platform. For the next couple of weeks, we plan to show one new video a day. Sometimes focusing on one artist over couple of days. The previous videos remain viewable in the archive.

HAUS is a solo exhibition by Fischli Weiss, the Swiss artist duo known since the 1980s for their films including Der geringste Widerstand (The Least Resistance) and ambiguous sculptural everyday objects.

At the core of this new exhibition is Haus (House), a work Peter Fischli and David Weiss first developed for Skulptur Projekte Münster in 1987 and subsequently showed in exhibitions at the Guggenheim Museum, New York and Museo Jumex, Mexico City (2016). This exhibition focuses on the architectural reference system at the heart of the artists’ work with a selection of sculptures and archival material.

The making of polyurethane objects has played a central role in the work of Peter Fischli and David Weiss for over 30 years. The objects themselves often depict utilitarian devices, tools or other everyday paraphernalia, all handcrafted and painted to be almost indistinguishable from the original. Boris Groys wrote that the practice of making the objects revives "the ethos of the artist as a working, creating craftsperson who once again represents the things of reality." Yet the exhibition of the polyurethane objects as artworks, carefully presented as if they were just mundane things, introduces layers of paradox, irony and humour.

This solo presentation of work by Peter Fischli and David Weiss will display a cross-fading installation of photographs showing views of airports. Beside this work, four sculptures are on view. The artists' focus of artistic investigation is the unspectacular aspects of domestic life, employing a wide variety of creative means of expression, ranging from film, photography and artists’ books, to sculptures and multimedia installations. The artists adapt everyday objects and situations which they place – not without humour or irony – in an artistic context, thus raising philosophical and theoretical questions regarding the explanation of the world.

In Walls, Corners, Tubes, the artists present a series of objects with geometrical bodies which have the form of walls, corners, and tubes and are made alternately of black rubber and unfired clay. Both the shapes of the objects and their titles such as Wand aus Ton ('Wall of Clay,' 2012) or Röhre aus Gummi ('Tube of Rubber,' 2012) recall functional elements, such as those often found at building supplies stores. Placed on high, white pedestals, the sculptures appear in various scales which distance them from their origin in the observed forms of reality. On the one hand, their dimensions are oriented towards the human body, so that they automatically relate to it like tools or items for everyday use. On the other hand, they become sculptures which, on a reduced scale, demonstrate an affinity to the objecthood of the Minimal Art of the 1960s.

Sprüth Magers London is delighted to present Objects on Pedestals, a survey of sculpture works by acclaimed Swiss artists Peter Fischli and David Weiss. The exhibition includes a selection from the series Rubber Sculptures (1986–1988), which comprises a number of life-size black rubber casts of ordinary and commonplace objects, including a chest of drawers, a table, a candle and a cutlery tray. The exhibition also features a number of sculptures, all made in 2007 in unfired clay, which also depict normal and quotidian objects, such as a shoe or a jug, although on an exaggerated scale. Together, these two bodies of work reveal the artists’ ongoing fascination with the banal and absurd qualities of the everyday, and the materiality and tactility of mass consumption.

Sonne, Mond und Sterne is a gallery-scale presentation of a project which originated in book form as a commission by the Swiss media conglomerate Ringier AG, to customise their annual report and turn it into a work of art.

The 2007 Ringier annual report consists of 40 pages of business data, and 800 pages of adverts. The adverts have been carefully selected and scanned by the artists from hundreds of newspapers and magazines that could be found at any newsstand in any part of the globalised marketplace. The adverts cover the whole spectrum of the lifestyle of the contemporary consumer, ranging from sport to travel and from fashion to family life. The adverts are carefully grouped and each image is positioned opposite a purposefully chosen companion image, so that each double-page spread forms a kind of diptych, revealing through association or juxtaposition an aspect of our mass culture of consumption.

The photographs Equilibres were created in the years 1984 and 1986. It is a series of 82 black-and-white and colour photographs showing assemblages of everyday objects. The attention is drawn to a dizzying construction, with gravity seemingly working in reverse, creating a state of suspension which cancels the weight and the value of the individual components. This is also summarized in the subheading of the Equilibres of Peter Fischli and David Weiss: „Am schönsten ist das Gleichgewicht, kurz bevor’s zusammenbricht.“ („Balance is most beautiful just before it collapses.“)

The Indiscreet Charme of Fischli and Weiss
Art in America, review by Nancy Princenthal, April 2016

‘What Is the Diameter of the Earth?’ and ‘Why Is the Earth Not a Cube?’: The Entropic, Liberating Power of Fischli and Weiss
Vulture, review by Jerry Saltz, February 16, 2016

Both born in Zurich, Peter Fischli (*1952) and David Weiss (1946–2012) met in 1977 and began their artistic collaboration shortly after, in 1979. Their artwork has been the subject of many prominent solo exhibitions around the world including shows at Aspen Museum of Art (2017), Art Institute, Chicago and San Francisco Museum of Modern Art (2017/18), Fondation Beyeler, Riehen/Basel (2016), Serpentine Gallery, London (2014), 21st Century Museum of Contemporary Art, Kanazawa (2010), Museo Nacional Centro de Arte Reina Sofia, Madrid (2009) and retrospectives at the Deichtorhallen, Hamburg (2008), Kunsthaus, Zurich (2007) and Tate Modern, London (2006). Their major solo show How To Work Better in 2016 was presented at Solomon R. Guggenheim Museum, New York and travelled to Museo Jumex, Mexico City in 2017.