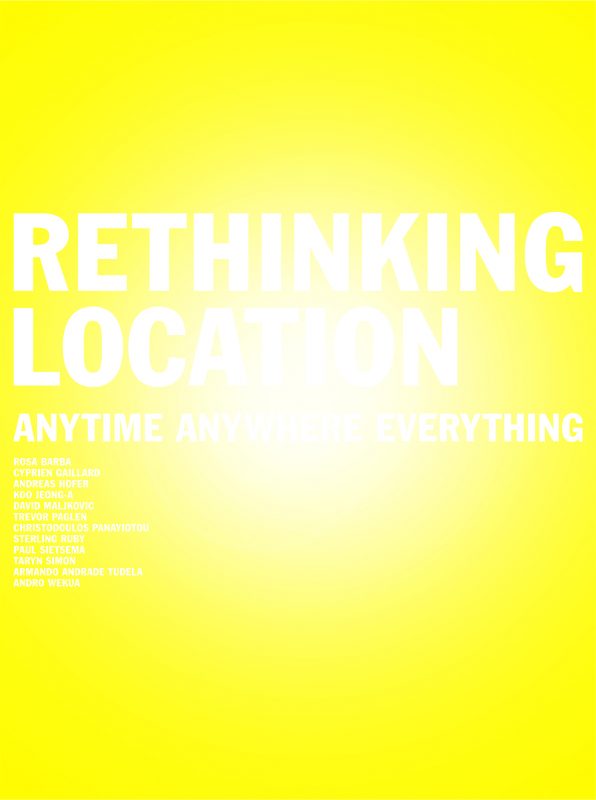 Evolving from the work of twelve conceptual artists, filmmakers and photographers presenting alternate interpretations of fictional geographies, imaginary sites and "mash-up" destinations, the exhibition Rethinking Location reconsiders the notion of location. In an era characterized by a rapidly changing perception of time and space due to ever increasing mobility, migration and globalisation, our understanding of what a location is has significantly tranformed. Taking these changes for granted, the exhibition investigates how artists consider location and geography as source material for their work.

The work of Rosa Barba and Taryn Simon often derives from an interest in unusal places or improbable situations: Barba's film The Empirical Effect (2009) explores a geographical "Red Zone": weaving a fiction around the Vesuvio Vulcano, her film was shot during an actual evacuation test and, on another level, points towards the complex relationships between society and politics in Italy. Collaborating with the scientific research laboratory Osservatorio Vesuviano in Naples, Barba creates a fictional documentary including surveillance cameras, seismographs and early archival material of Naples by the Lumière Brothers. Empathizing with the role of a contemporary ethnographer, the work of New York based photographer Taryn Simon oscillates between an aestheticized realism and collective memory. The works shown in Rethinking Location symbolically refer to sites of geopolitical weight, such as the interior of Fidel Castro’s Palace of the Revolution in Havanna and night shots of a checkpoint between Jerusalem and Ramallah on the West Bank.

In his work, Cyprien Gaillard alters the hierarchy of geographical sites and their representative value by detaching them from their original connotations: it deconstructs and conflates actual landscapes perpetuated by a spirit of anachronism and ruin of both past and present. His Fields of Rest series (2010) evolves around decomposed architecture of Second World War bunkers at the coastlines of the French Normandy.

Paul Sietsema’s 16mm films, drawings and sculptures bridge color, space and movement through subjects spanning a broad geographic and temporal range. Over the last years, Sietsema has gathered archival photographs of artifacts of "lost cultures," often from rare anthropological and ethnographic books. The artifacts he examines and transcribes into his own work often derive from western colonialism, industrialization and geographic explorations including Oceania, South Asia and Africa. In his film Analyse d'une épave (2008) he traces a shipwreck, capturing its ruins on celluloid like timeless sculptures of a lost cultural memory.

Christodoulos Panayiotou's Soliloquy (The Sea) of 2010 proposes a dynamic yet open narrative that pervades the imagery of colonial expeditions; the work is part of a series of acquisitions of historical theater backdrops by the artist, shown lying, folded, on the floor, together with an accompanying archival photograph of it installed as original theater stage set. Being interested in the subject of absence or "negative presence," for Panayiotou it is generated from both the legacy of the modern spectacle and his interest in anthropology.

Recalling thoughts by Bourriaud of the artist as Semionaut, treating geography as source material for new work, the drifting and the displacement between different cities allows artists to enter multidimensional, seminal dialogues within different contexts. Within both a local and global artistic practice charted by increasing displacement, expeditions, distances and routes are elements that become incrementally significant.

Interested in topographies of detachment and displacement, Aramando Andrade Tudela explores the notion of "tropical abstraction." Referring to the potential of 1960s utopian modernist architecture from South America, his 16mm film Untitled Film #2 (Espace Niemeyer and Infra Red Light) of 2007 takes place in the headquarters of the French communist party in Paris. Shot mostly in close-up mode, Tudela transformed the site built 1967–72 by Brazilian architect Oscar Niemeyer into a "non-place": a fictional site without geographical foundation.

David Majlkovic's work develops from the potential of "utopian" heritage, highlighting forgotten monuments occurring during a period of optimism towards the future in the 1960s and 1970s in former Yugoslavia. His Lost Pavilion series (2008) takes shape around the reconstruction of a futuristic American World Expo site, prototyped for the World Fair in Zagreb in 1956.

Koo Jeong-A creates mythologies and imaginary sites within the logic of existing places. Her work often gives prominence to the hidden, the ephemeral and the invisible. For the exhibition Koo Jeong-A produced a new series of works, consisting of geological and social layers where maps, drawings and signs extend to a notional geography. Furthermore, she created a site specific, secret location yet to be discovered in the exhibition.

Andro Wekua's approach arises from the reconstruction of memory, confronting us with projections of our subconscious and the media. Merging archival material, found imagery and magazine pages of both autobiographical and popular culture references, his My Bike and your swamp (yesterday) 2 (2008) collages convey velocity and rapid location changes.

In Carthographic Yard Work: Dog Behavior (2009), a meditative video-performance by Sterling Ruby, the artist loads holes in a detritus filled industrial yard. The camera pans the yard in 360 degrees, becoming a double exposure as a slowed down voiceover intones techniques for the training of a misbehaving dog.

Today, intersections between actual sites, mass media and communication technology transform places into virtual "mash-up" locations: archipelagos of alternating signs oscillating between the actual and the virtual. Moreover, the internet has significantly increased the presence of maps and navigation systems in our thinking. For example, it has become easier to generate maps, to share and alter them, and to create them collaboratively (e.g. GPS and geotagging systems like Google Maps and Google Earth).

The art of Trevor Paglen blurs the border of art, science and politics. Holding a doctorate in geography and operating at the University of California, Berkeley, geography department, Paglen uses data analysis, advanced research skills and state-of-the-art photo observation techniques to map the terrain of American military secrets. He appropriates scientific imagery and discourses of astronomy to provide the framing for what he calls an "experimental geography." In his series The Other Night Sky (2008) Paglen turns our attention to some 189 secret intelligence satellites operated by the US military to keep most of the world under surveillance.

The juxtaposed positions within Rethinking Location express a vast area of interconnected ideas and systems in a world where places are increasingly re-articulated and interrelated. Fostering an interdisciplinary approach, the exhibition aims to serve as inspiration to reconsider what the notion of location implies today. After the recent emphasis on networks and communities, could the focus now shift to location as a new key dimension?

Taryn Simon
Interior of Fidel Castro's Palace of the Revolution, 2003

Andro Wekua
My Bike and your swamp (yesterday) 2, 2008
More Views

Inquire
Andro Wekua
My Bike and your swamp (yesterday) 2, 2008

Inquire about available works by

Rethinking location, in Berlin
domusweb.it, review by Beatrice Galilee, May 28, 2010