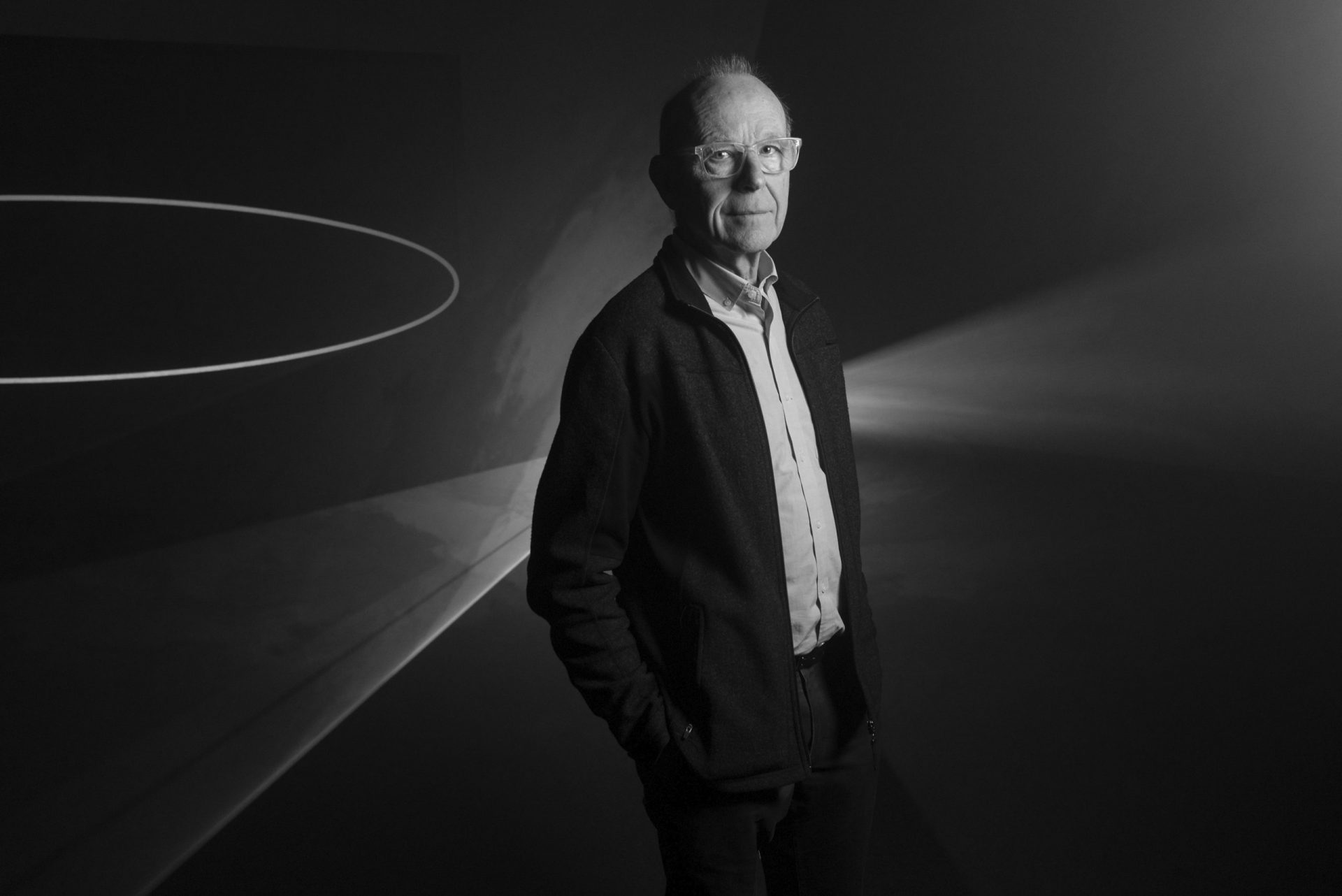 Since the 1970s, Anthony McCall (*1946) has been using light to cut ethereal shapes into the space of dark, smoke-filled interiors. In a unique intersection of media, his works are simultaneously films, installations, sculptures, drawings and environments experienced through time, part of an investigation into the sculptural potential of the film medium.

McCall’s early association with radical film practice in late 1960s London soon extended to an interest in performance, perhaps most famously with the work Landscape for Fire (1972) and the 16mm film that is a document of this moment. Small fires were ceremoniously lit in a geometric pattern by white-uniformed participants in a field, accompanied by the sound of the flaring fires and a foghorn that created the sense of a scientific experiment or state of emergency. The grid system gave structure to the unpredictable volatility of fire as a medium as well as an overarching governing structure, perhaps akin to a musical score, in which the quantity of petrol to burn, number and spacing of fires, walking pace and ignition sequence were all strictly measured.

Upon the completion of this work, McCall considered the primary event to be the performance and not the film. This realization led him to whether he could make a film that exists solely at that moment of projection, and if so, what form would it take. His first attempt to find that form was Line Describing a Cone (1973), a painstakingly hand-drawn single point that extends into a full circle, with the light between the screen and the projector slowly becoming a conical plane of light in a haze-filled three dimensional space. The austerity of such a gesture was stripped back even further with Long Film for Ambient Light (1975) in which even the projector was dispensed of in lieu of a single bulb hung from the ceiling of a blacked out room, the cinematic event reduced to the incidental light effects of the source on the space. McCall referred to this new series of projections as “solid-light works.”

It was only in the late 1990s that McCall returned to such works, his interest piqued by the development of the haze machine, the prevalence of new screen and projection-based practices and the arrival of custom animation software and high luminosity, long-throw digital projectors. These permitted him to create waves, ellipses and other complex curvilinear geometries that, along with titles such as Breath, Meeting you Halfway (2009) and Between You and I (2006), allude further to states of exchange between the multiple linear trajectories of the body-like forms. In both analogue and digital practices, the movements of the viewer’s body are gently encouraged to synchronize with the film’s drifts and undulations, creating harmonic patterns of slow-motion bodily response and a heightened sense of corporeal awareness. McCall’s phenomenological approach to understanding the work also creates a link to the minimalist and post-minimalist sculptors that distanced themselves from the internal dynamics of the art object, instead favoring the immediate perceptual dynamics of the encounter between viewer and sculpture.

A body of preparatory drawings and maquettes has always accompanied the films, combining the functions of storyboard, mathematical formulae, perspectival drawing and a looser, more generous working out of form. In their function of freezing a work to its core formal elements, either for the artist or a collaborator, they offer both an insight into working processes and a moment of contemplation for McCall’s key concerns of space and time.

Inquire
Anthony McCall
You and I, Horizontal (II), 2006

Inquire
Anthony McCall
You and I, Horizontal (II), 2006

Anthony McCall's exhibition Solid Light and Performance Works at Pozu Santa Bárbara and Mieres Centru Cultural in Mieres, Spain presents a number of works from the 1970s in dialogue with his current practice.

Sprüth Magers presents a solo exhibition by British born, New York based, Anthony McCall, to coincide with a major survey of his work at The Hepworth Wakefield. On view in the lower galleries is the solid-light work Meeting You Halfway II (2009), as well as a selection of large-scale silver gelatin photographs from Smoke Screen (2017)—an entirely new series that marks a departure in the artist’s practice.

Internationally recognized for groundbreaking work that occupies a space between sculpture, cinema and drawing, Anthony McCall’s practice has influenced a generation of artists working with film and installation. The exhibition at Sprüth Magers Berlin offers an unprecedented occasion to see three of the artist’s seminal ‘solid-light’ works that were produced in the early 1970s in New York, including Four Projected Movements (1975).

The three films featured in this exhibition, Landscape for Fire, Landscape for White Squares and Earth Work, originally shot in 16mm, document a series of live, outdoor, sculptural performances. All three performances were made in collaboration with Exit, a British group of musicians and artists. The earliest film, Landscape for Fire, records a performance in which a group of participants ignited containers of petrol laid out in a grid pattern across the field. Their actions were meticulously organized according to ‘scores’, drawn up by the artist beforehand, also on display here in the exhibition

Running concurrently with Anthony McCall's exhibition 'Vertical Works' at Ambika P3, 'Works on Paper' at Sprüth Magers London includes a selection of drawings and photographs from the last 40 years of McCall's career, and showcases two key works: Landscape for Fire (1972) and Five-Minute Drawing (1974).

Over the past five years McCall has explored solid-light works that are oriented vertically – projecting downwards from the ceiling onto the floor, forming 10-metre tall, conical ‘tents’ of light, with a base of about 4 metres. Here, the projected line-drawing on the floor is, quite literally, the footprint of the work, with the three-dimensional ‘body’ rising up from the floor and finally narrowing to a point at the lens of the projector, well-above one’s head. From the point-of-view of the observer, the vertical pieces create a profoundly different type of encounter. Four of these works, each of them showing in the UK for the first time, will be presented as a single installation in the Ambika P3 exhibition space.

Anthony McCall: “The sculptural aspect of a piece occurs only at the moment of projection”
Studio International, interview by Joe Lloyd, March 14, 2018