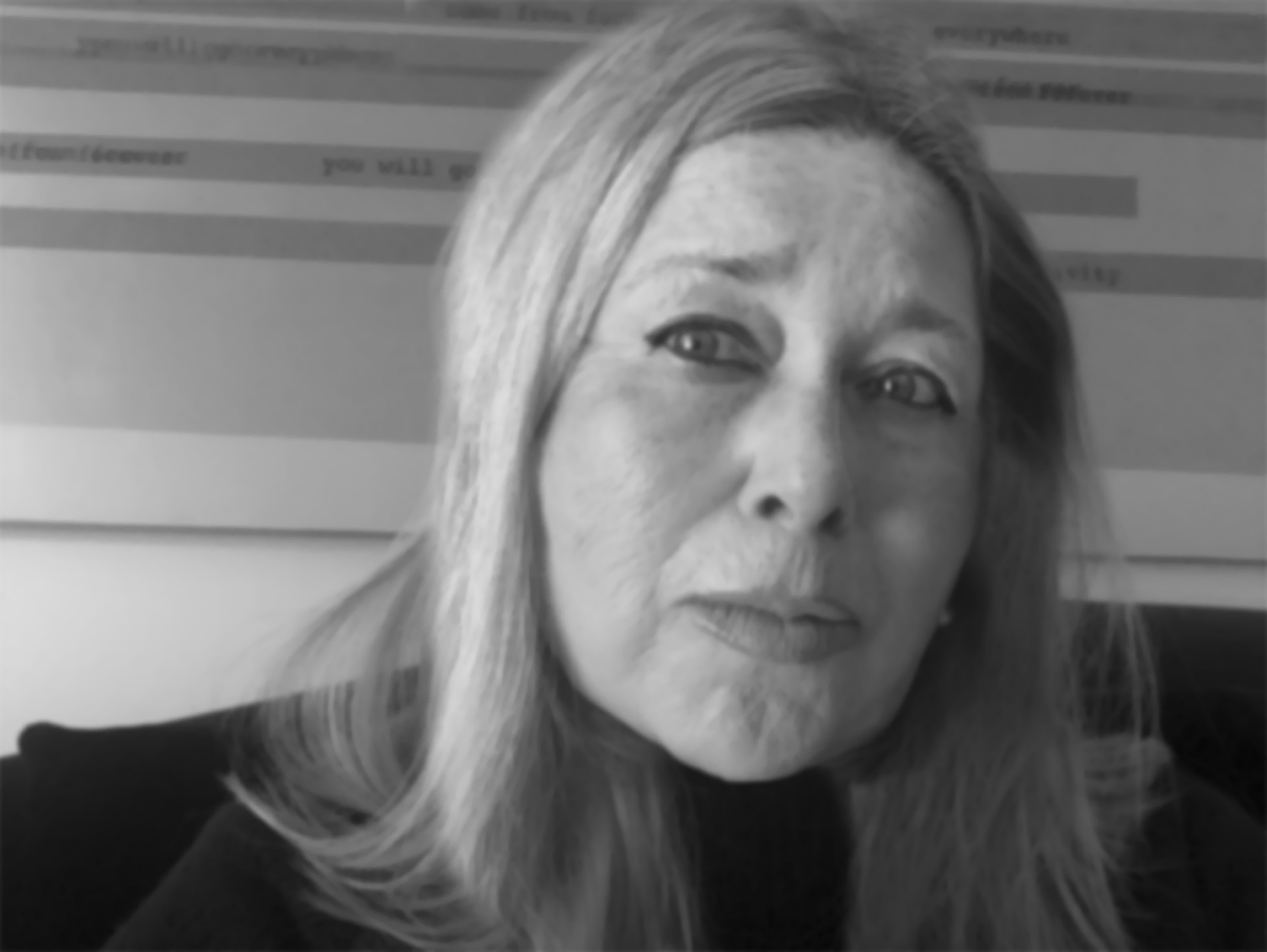 Astrid Klein (b. 1951) is one of Germany’s most distinguished conceptual artists. Collage constitutes the main formal and artistic principal of her work. Her large-scale wall pieces often combine found images with her own text or quotes from philosophy, theory or science to illuminate suppressed aspects of the collective unconscious and to question conventional power structures and modes of representation. Her oeuvre—comprising photographic work but also neon and mirror sculptures, installations, painting and drawing—oscillates between poetry and criticism, skepticism and longing. The Cologne-based artist has been associated with the gallery since 1996.

Key features of Klein’s artistic and intellectual grammar can be traced to her earliest body of work. Her so-called Schwarze Bilder or Black Paintings (1974–77) on black silk depict faceless female bodies in miniature scenes steeped in mythology and symbolism; their imagery is juxtaposed with handwritten texts and hieroglyph-like signs. The series represents an almost somnambulistic attempt to situate oneself outside of patriarchal and political power structures, or at least take them on.

Klein radicalizes this grammar even further in early collages, including her iconic Les tâches dominicales (Sunday Works) (1980). The groundbreaking series incorporates visual material from photo-novels and stills from French New Wave and Italian neo-realist films. The artist combines these images—mostly photographs of women—with suggestive lines of text in French, English or German: “Tout est dans le regard,” “ich spüre nichts von dem, was er spürt” or “and realizes that any moment, any second her turn is coming.” Klein treats images and text as equally important visual elements. In doing so, she not only strips the photographic source material of its narrative logic; she also injects it with moments of ambivalence and subtle disturbance, engages sensually with media culture and sheds light on political and socio-critical issues.

While a number of Klein’s early collages find her using typewriter-labelled adhesive tape to connect individual image elements, the artist’s large-scale photographic works are created in a complex darkroom process that involves enlarging the found material in several steps, layering and adding drawing elements. The resulting “collage” is condensed in a single, large-scale photographic print. Series including CUT I–X (1986–96) or Frauenbilder (Images of Women, 2002–05) show, almost by virtue of their medium, how all power and representation structures—and the historical and social ideologies they entail—are nothing more than cultural constructs, there to be taken apart and reassembled. Informed by psychoanalysis, feminism and linguistics, Klein has applied her deconstructive approach to other media as well. The Weiße Bilder or White Paintings (1988–1993), rendered in white-on-white, make the invisible visible. Her Fliegenfänger sculptures (Flycatchers, 1981–91) incorporate mechanical and electrical fly traps while Spiegelarbeiten (Mirror Works, ongoing since 1991) find the artist taking up a 9mm revolver and spraying mirrors with bullet holes, shattering the viewer’s perception. Klein’s Neonskulpturen (Neon Sculptures, ongoing since 1991) are complex structures of neon tubes imprinted with enigmatic texts. While their lines are reminiscent of drawings, they also transpose the principle of collage into space.

Whatever medium Astrid Klein uses, the ultimate focus of her work is always the viewer. Her oeuvre never stops at simply undermining power structures and representation mechanisms or rendering them visible; it aims to dismantle them and to destabilize conventional pictorial. Poignant and impactful, her works often trigger a surprising moment of reflection in the viewer—and a possible interrogation of their own social constructs and ways of being in the world.

Astrid Klein
Untitled (What has happened to me?), 1992

More views
Inquire
Astrid Klein
Untitled (What has happened to me?), 1992

Untitled (What has happened to me?), 1992 (installation view)

Inquire
Astrid Klein
Untitled (What has happened to me?), 1992

Untitled (What has happened to me?), 1992 (installation view)

Inquire
Astrid Klein
Untitled (What has happened to me?), 1992

Your message has been sent.
Current and Upcoming
Astrid Klein, Untitled, 1979
© Astrid Klein

The Bundeskunsthalle regularly presents exhibitions of works from the collection of the Federal Republic of Germany. The latest iteration shows a selection of some 170 works that were purchased by the expert commission in the most recent five-year period (2017-2021) as well as works that were acquired by an expanded commission with funds from NEUSTART KULTUR (2020-2021). The curatorial team hopes that the mixture of the two sets of acquisitions will not only prove topical and relevant but also offer a representative cross-section of contemporary art, including some very recent works.
The curatorial concept was developed in collaboration with a team of members of the acquisitions commissions. The title of the exhibition, a quotation taken from one of the works, articulates the demands made on the works: diversity, tolerance and the critical analysis of individual or collective identities are criteria that inform the selection. Moreover, the dialogue-based concept of the exhibition addresses themes such as contemporary political and social relevance, postcolonial discourse, posthumanism, constructions of history, urbanity and aesthetics.

For more than 50 years, the Kunstmuseum has been collecting contemporary photography. Over 400 works and series have been accumulated in the process, comprising a total of several thousand photographs. As part of the funding program “Forschungsvolontariat Kunstmuseen NRW,” the collection has been systematically documented and researched and will be presented anew in the special exhibition German Caviar.
With works by Bernd & Hilla Becher, Rudolf Bonvie, Christo & Jeanne-Claude, Walther Dahn, Ceal Floyer, Andreas Gursky, Jürgen Klauke, Astrid Klein and others.

At the heart of Astrid Klein’s work is a reflection on mechanisms of representation, (visual) stereotypes and power structures that guide and determine both our perception and our thinking. She combines existing visual material with equally important text fragments drawn from an in-depth examination of philosophical, aesthetic and scientific theories.

The artist’s second solo show at the Berlin gallery will showcase work produced in the 1980’s, alongside a new series of collages. The title of the exhibition is taken from a work of philosophy and Marxist critical theory by French philosopher and artist Guy Debord. Published in 1967, the text focuses on ideas surrounding the degradation of human life, mass media and commodity fetishism, and comparisons between the role of religion and mass media marketing. Debord's critical view on social functions, values and structures of behavior are frequently repeated themes in Astrid Klein's work.

The painter and sculptor Astrid Klein has been working at integrating text into her paintings for over three decades. In 1972, before she had even started her degree in Cologne (1973-77), she began to write several texts which she later printed onto hand-made paper. The topics of her own texts, as well as her later use of other textual sources, bear witness to her thoughts on literary, aesthetic, philosophical and scientific writings. In a fragmented and concealed way these various sources are incorporated into her Schriftbilder (text paintings) which make up the large majority of the exhibited works in Berlin.

Born in 1951 and trained as a painter and sculptor, Klein is a manipulator of the photographic medium. Her photographs, paintings and installations contaminate, deconstruct and revive the relationship between the photographic image and text and can be interpreted as a metaphor for the estranged personal self and its representation in society. Like the work of Barbara Kruger and Cindy Sherman, Klein’s art is an expression of the burgeoning media culture of Western society in the 1970s.

Photography has played a key role in Astrid Klein’s œuvre since the mid 1970s. Her approach to photography differs from the traditional documentary use of the medium: Astrid Klein uses photographic material taken from film, TV, advertising and journalistic texts, which she manipulates. She inverts colours, layers images, adds fragments of texts to the images or overexposures them.

Astrid Klein & B. Ingrid Olson // Profile of the artists
The Seen, interview by Alfredo Cramerotti, Spring 2017