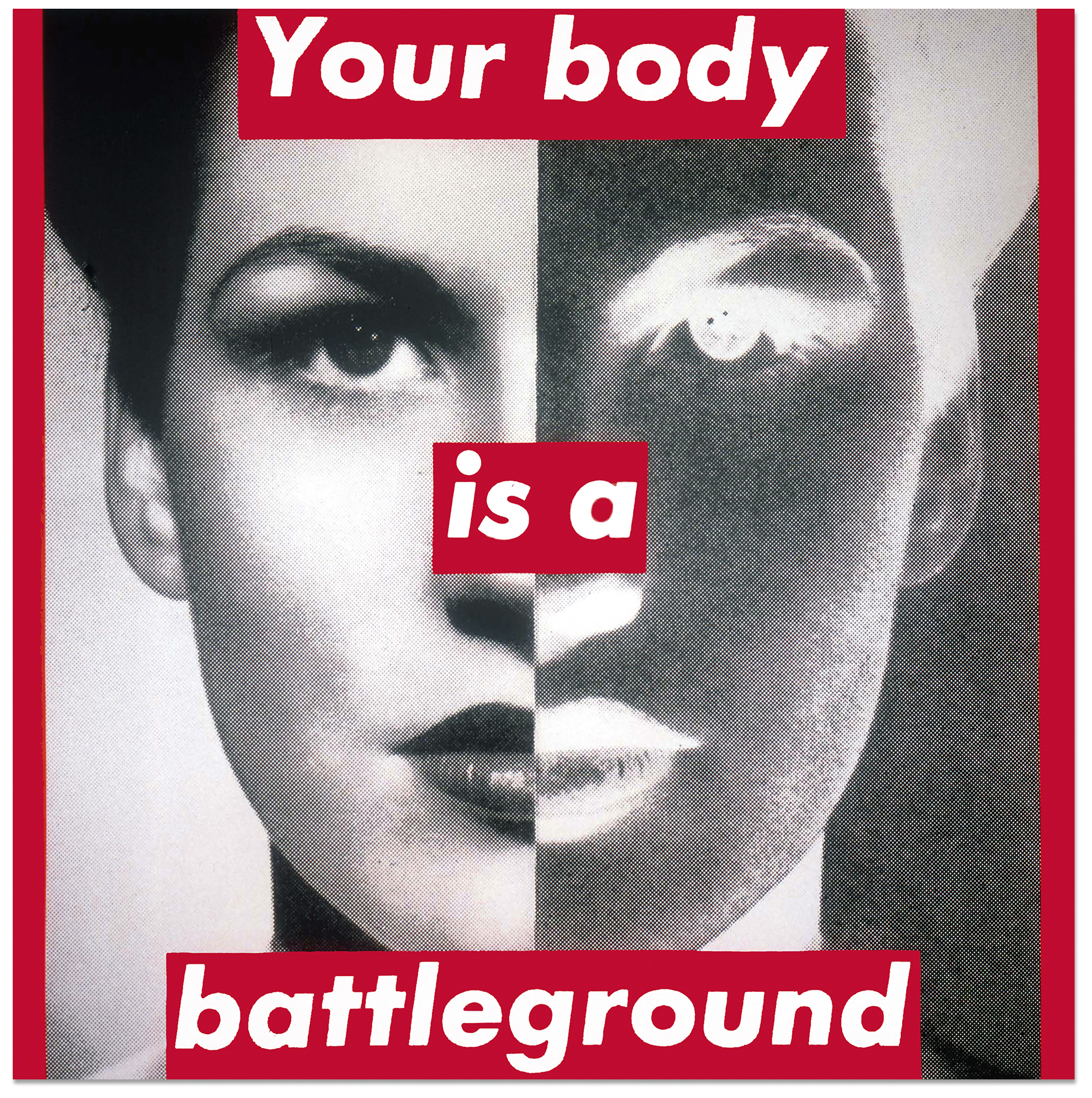 Barbara Kruger (*1945) is a key artist of the Pictures Generation and in the development of appropriation art, post-conceptualism and feminist art. Since the mid-1970s, she has juxtaposed her own texts with found images in order to reveal and undermine socially-ingrained assumptions about power, capitalism, politics, and gender that often go unquestioned, driving socio-political debates. The Los Angeles and New York-based artist’s influential oeuvre spans from photomontages to complex video and sound projects and installations in public space. Kruger has been with the gallery since 1985, represented first by Galerie Monika Sprüth and later by Sprüth Magers.

Kruger has always managed to find new ways to reach the public, from traditional pictorial formats to vast architectural installations that transform the walls, ceilings and floors of entire exhibition spaces. Her works may appear in magazines and newspapers, the kind of light boxes usually reserved for advertising, T-shirts, posters, shopping bags, billboards, LED displays, displays on buses and in train stations, and on building facades.

The texts in Kruger’s photomontages—often white lettering on a red background—typically become image elements in their own right. They can take the form of evocative statements (“I shop therefore I am,” “Your body is a battleground,” “We don’t need another hero”), questions (“Do I have to give up me to be loved by you?”; “Who will write the history of tears?”) or suggestive declarations (“Put your money where your mouth is”; “You are not yourself”). The texts dismantle the found image’s pictorial plane, making room for an abundance of echoes, effects, contradictions and implications.

Kruger’s emphatically visual conceptual practice draws on the aesthetics of graphic design, magazines, 1970s punk posters and album covers. It plays with ideas informing the language-based conceptual art of the 1960s and 1970s, as well as those underpinning John Baldessari’s enigmatic text and image works, and it adds to the art historical legacy of German Dadaism and Soviet agitprop art by El Lissitzky and Aleksander Rodchenko.

Perhaps the biggest difference between Kruger and her predecessors is her strategy of subversive mimicry. Kruger uses the dominant advertising media of late capitalist consumer society to criticize its patriarchal structures, its hierarchies and dynamics, effectively supplanting the innate purposes of these media with her own singular, political education project.

Kruger’s works are political without trying to persuade viewers to adopt any particular system or ideology. Instead they invoke and rattle certain positions viewers might take on account of their gender, social class, nationality, religion, or age, confronting them with often repressed feelings of powerlessness, ignorance, anger, fear, or greed. They essentially exploit the immediacy of images and texts, the unconscious and semi-conscious reactions evoked in the beholder, and upend social stereotypes by forcing viewers to consider them in a new light. They are as seductive as successful advertising and as effective as propaganda. Ultimately Kruger subverts the system of cultural representation, turning it back on itself: She uses the words and images of cultural hegemony to reveal its modes and undermine its mechanisms.

Inquire
Barbara Kruger
Untitled (If you want a picture), 2017

Inquire
Barbara Kruger
Untitled (We are all that heaven allows), 1984

Inquire
Barbara Kruger
Untitled (Your life is a perpetual insomnia), 1984

Barbara Kruger
Untitled (Who is free to choose?), 1990

Barbara Kruger
Untitled (Who is free to choose?), 1990

Inquire
Barbara Kruger
Untitled (If you want a picture), 2017

Inquire
Barbara Kruger
Untitled (We are all that heaven allows), 1984

Inquire
Barbara Kruger
Untitled (Your life is a perpetual insomnia), 1984

Your message has been sent.
Current and Upcoming
BARBARA KRUGER: THINKING OF YOU, I MEAN ME, I MEAN YOU

BARBARA KRUGER: THINKING OF YOU, I MEAN ME, I MEAN YOU
Art Institute of Chicago
April 2021

The Art Institute of Chicago; the Museum of Modern Art, New York; and the Los Angeles County Museum of Art are pleased to announce a major solo exhibition devoted to the work of Barbara Kruger.

Opening at the Art Institute of Chicago in April 2021, THINKING OF YOU, I MEAN ME, I MEAN YOU will present four decades of the artist’s work—the largest and most comprehensive presentation of her work in twenty years.

This exhibition showcases the work of iconic Los Angeles artists John Baldessari, Mike Kelley, Barbara Kruger and Ed Ruscha. Each has contributed to a wide-reaching and global art dialogue; they have also played key roles in shaping the art scene of Los Angeles and the city’s rise as a global arts capital.

Graphic Pull: Contemporary Prints from the Collection highlights numerous printmaking techniques from the Nasher Museum’s collection with works dating from the 1970s to today. Including both traditional and unconventional printing methods, the exhibition explores how contemporary artists have continued to use this age-old graphic form while also expanding on its processes and definitions.

Since photography’s inception in the mid-nineteenth century, women have stood among its artistic and technological pioneers. Modern Women: Modern Vision features 100 works from the Bank of America Collection by leading artists of the twentieth and early twenty-first centuries.

This exhibition explores the role of women in art and art history at the Cincinnati Art Museum through works from the museum’s permanent collection created from the seventeenth century to today. Art from across Europe, North America and Asia in a range of mediums is featured together, including oil on canvas, metalwork, ceramic, prints, photography, and fashion. The exhibition encourages visitors to think critically about gender, representation, and diversity and how that translates to the museum’s collecting practices and gallery installations.

MOCA has reinstalled this monumental wall work by Los Angeles–based artist Barbara Kruger. The emblematic red, white, and blue artwork was originally commissioned by MOCA in 1989 and was last installed in 1990 on the south wall of MOCA's building (now The Geffen Contemporary at MOCA). The work holds an iconic place in the collective memory of Los Angeles' art community and is considered one of the museum’s curatorial highlights over its forty-year history. In connection with the work, MOCA led a series of voter registration efforts during the 2018 midterms and will continue these efforts in advance of the 2020 general election.

Eau de Cologne began as a series of exhibitions and three publications, organized by Monika Sprüth between 1985 and 1989, which sought to create a new dialogue around contemporary art. The exhibitions introduced a select group of young women artists, each of whom individually represented powerful attitudes and practices.

Sprüth Magers presents FOREVER, a new site-specific work by Barbara Kruger. For this installation, which occupies all four walls and the floor of the Berlin gallery’s main exhibition space, the artist has created one of her immersive room-wraps and several new vinyl works. Their boldly designed textual statements on the nature of truth, power, belief and doubt embody the distinctive visual language that Kruger has developed over the course of her forty-year career.

This solo exhibition by American artist Barbara Kruger will feature a new multi channel video installation, entitled The Globe Shrinks, 2010, that continues the artist’s engagement with the kindness and brutality of the everyday, the duet of images and text and the resonance of direct address.

The first solo exhibition in Berlin by American artist Barbara Kruger features a new multi channel video installation, entitled The Globe Shrinks (2010) that continues the artist’s engagement with the kindness and brutality of the everyday, the duet of images and text and the resonance of direct address.

Paste Up presents a survey of early work by acclaimed American artist Barbara Kruger. Using contrasting layers of text and image, Kruger’s work has for almost three decades probed the nature of a media-saturated society in late capitalism, and the significance of highly evolved cultures of consumerism and mass politics to the experience and making of social identities.

Uneasy Angel / Imagine Los Angeles is a thematic exhibition comprising the creative production of contemporary artists, writers, and filmmakers living and working in Los Angeles. In light of Umberto Eco’s and Jean Baudrillard’s notion of hyperreality, the exhibition perceives Los Angeles as just such a place—with unclear boundaries separating reality and the imaginary.

In an installation layering expansive wall images and large scale digital color photography, Kruger continues to visualize the possibilities, powers, and consequences that construct and contain us.

Barbara Kruger on Feminism, #MeToo And The Power Of Words
Tatler, article by Payal Uttam, March 25, 2019

In advance of the midterms, Barbara Kruger reprises MOCA mural that asks ‘Who is beyond the law?’
Los Angeles Times, article by Carolina A. Miranda, October 18, 2018

These ’80s Artists Are More Important Than Ever
The New York Times, article by Gary Indiana, February 13, 2017

The Medusa Effect or, The Specular Ruse
Art in America, article by Craig Owens, January 1984