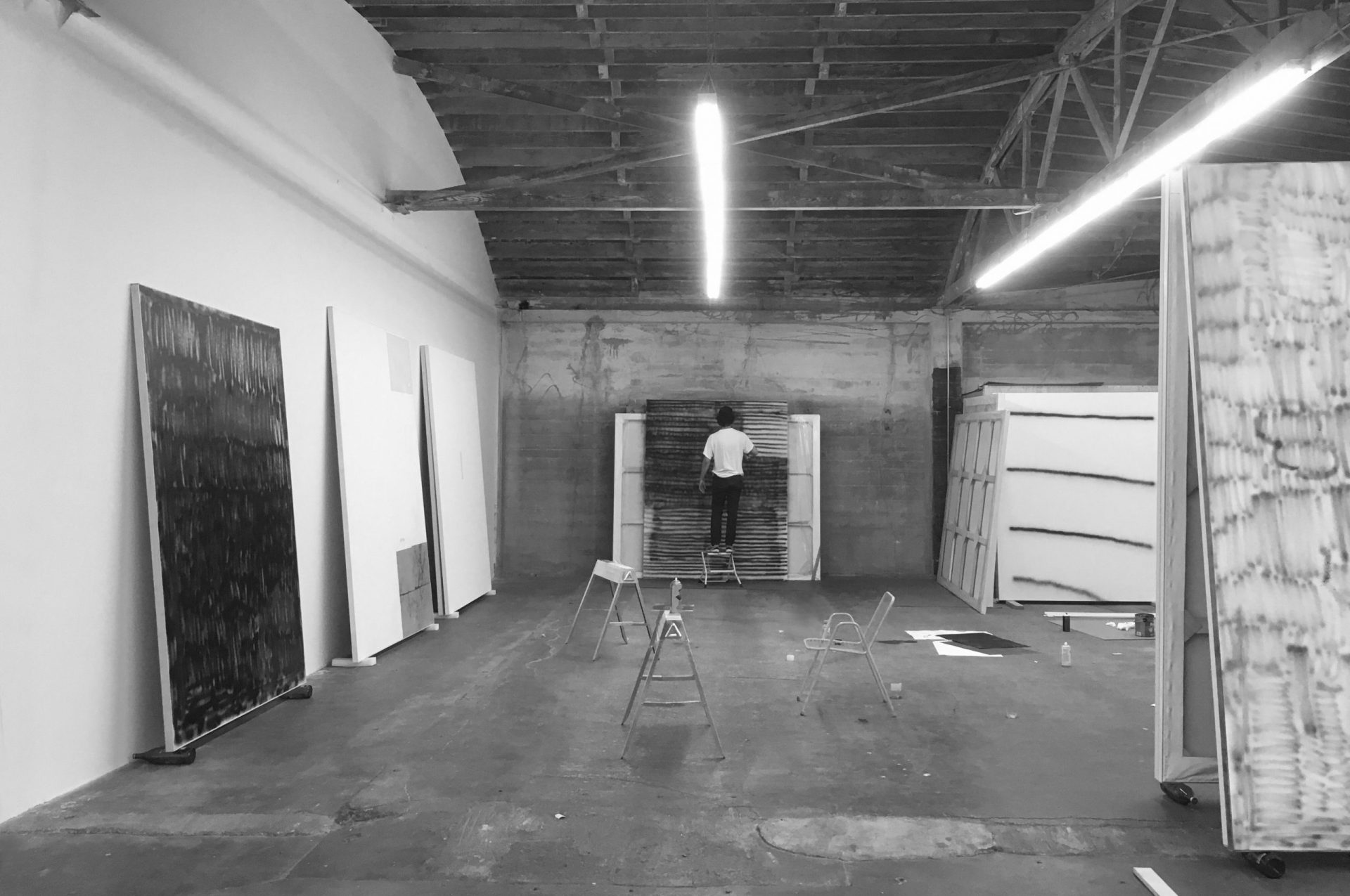 David Ostrowski (*1981) has produced a body of work that revolves around the idea of the zero point—a place of nothingness or the beyond of cultural and painterly codes. Ostrowski’s paintings are products of a desire to eliminate painterly knowledge. They are expressions of the idea that in producing notions of emptiness, one also grapples with and comments on the history of painting. The Cologne-based artist’s light-handed and complex approaches to the non-motif open the space of the canvas to unique breaches of perception and an unexpected freedom of seeing.

Even the materials used in Ostrowski’s work testify to a striking attempt at reduction. He uses little more than canvas, primer, emulsion, spray paint and wooden strips along with found pieces of paper, cardboard, adhesive tape or textile. His largely monochrome works are created in an artistic process that relies on both an instinctive refusal of pictorial conventions and the methodical use of coincidences and errors. Paint traces only sometimes take on a symbolic character—as a spray-painted circle of color, for example, a hint of a geometric form or a crooked smile. More recent paintings show remnants of tape with the word “fragile,” parts of the painted logo of a German hardware store or pictogram-like owl motifs that have been partially or completely painted over. A closer look at many of the paintings reveals traces of dirt, footprints, studio detritus. Some have a smooth, radiant white background. Others look like a meditation on the color red. Still others are not even primed.

Ostrowski’s minimal, gestural works abandon both the traditions of figuration and the conventions of abstraction. Their tension derives from an irreducible pictorial uncertainty. The painter consistently refuses to comply with the usual criteria for creating value in contemporary art: material value, painterly bravura, conceptual references, institutional critique, ties to intellectual discourse, or forced self-referentiality. His works thwart not only any desire for interpretation, but often even the attempt to classify or catalogue them. Many of his paintings are titled F, for instance, a letter that some commentators have interpreted to stand for “failure” or Fehlermalerei (“error painting”).

Ostrowski’s paintings occasionally recall those by later Abstract Expressionists, the scalpel works of Lucio Fontana, Robert Rauschenberg’s White Paintings, or the silkscreen graffiti paintings of Christopher Wool. But with these allusions, Ostrowski primarily addresses their failure, striking a balance between admitting the futility of any artistic endeavor and the need to continue making art nonetheless.

Paradoxically, Ostrowski’s work provokes an extraordinary perceptual experience aimed at the sublime. His paintings attest to a rigorous self-emptying, an opening-up to the emptiness of the canvas and the emptiness of the world. Operating on the borderline between apathy and seduction, they show that aesthetic experience emerges in precisely those places where preconceived attributions of meaning no longer apply. They seem to express that you can only really begin to see and understand when you actually no longer understand anything.

David Ostrowski is known for a reduced but complex formal expression and his minimalistic abstract canvases in white or black. The artist's most recent works mark his systematic approach to another "non-color" – a conventional, commercial gray. In this new group of works, Ostrowski repeatedly paints over the primarily small-format works while exposing isolated forms, highlighting them or adding to them. A process that is also reflected in the dating of his works, some of which indicate different years of creation (e.g. 2008/2020 or 2005/2021).

Ostrowski combines the titles of the new works from his typical F and names of well-known popular musicians, such as F (Faith Hill) and F (Chris Isaak). Authors of an eminently accessible music that surrounds us in everyday life – including the artist who listens to it on CD in his studio.⁠
⁠
The catalog with texts by Fabian Schöneich and Oliver Tepel takes readers through our exhibition It can't be that cold and close to Ostrowski's work.

It can’t be that cold is David Ostrowski’s first solo exhibition at the Berlin gallery. The artist’s most recent works show a further mining of painterly codes and non-motif, though they also mark his first systematic approach to the color gray. In an echo of his earlier white as well as black works, Ostrowski pursues the idea of total reduction and a deliberate break with painterly traditions and precepts. Once again he strives for the “zero point” of painting, fully cognizant of the fact that any attempt is bound to fail.

Art knows no zero point. It has no concept of an outside place, no indefinite expression; it is impossible to represent 'nothing'. French cultural theorist Roland Barthes was the first to point this out. According to Barthes, every work carries with it the illusions of the culture in which it was made. The mesh of everyday myths is unavoidable; art history’s thicket of codes impenetrable. But for all its impossibility, the desire for this kind of zero point, the yearning to see without codes and connotations, remains essential. We all long for it. Astonishingly, the works of young Cologne artists Michail Pirgelis and David Ostrowski diligently strive toward this precise way of seeing.

“So kalt kann es nicht sein / It can’t be that cold”
Kunstforum International, review by Larissa Kikol, May 2021