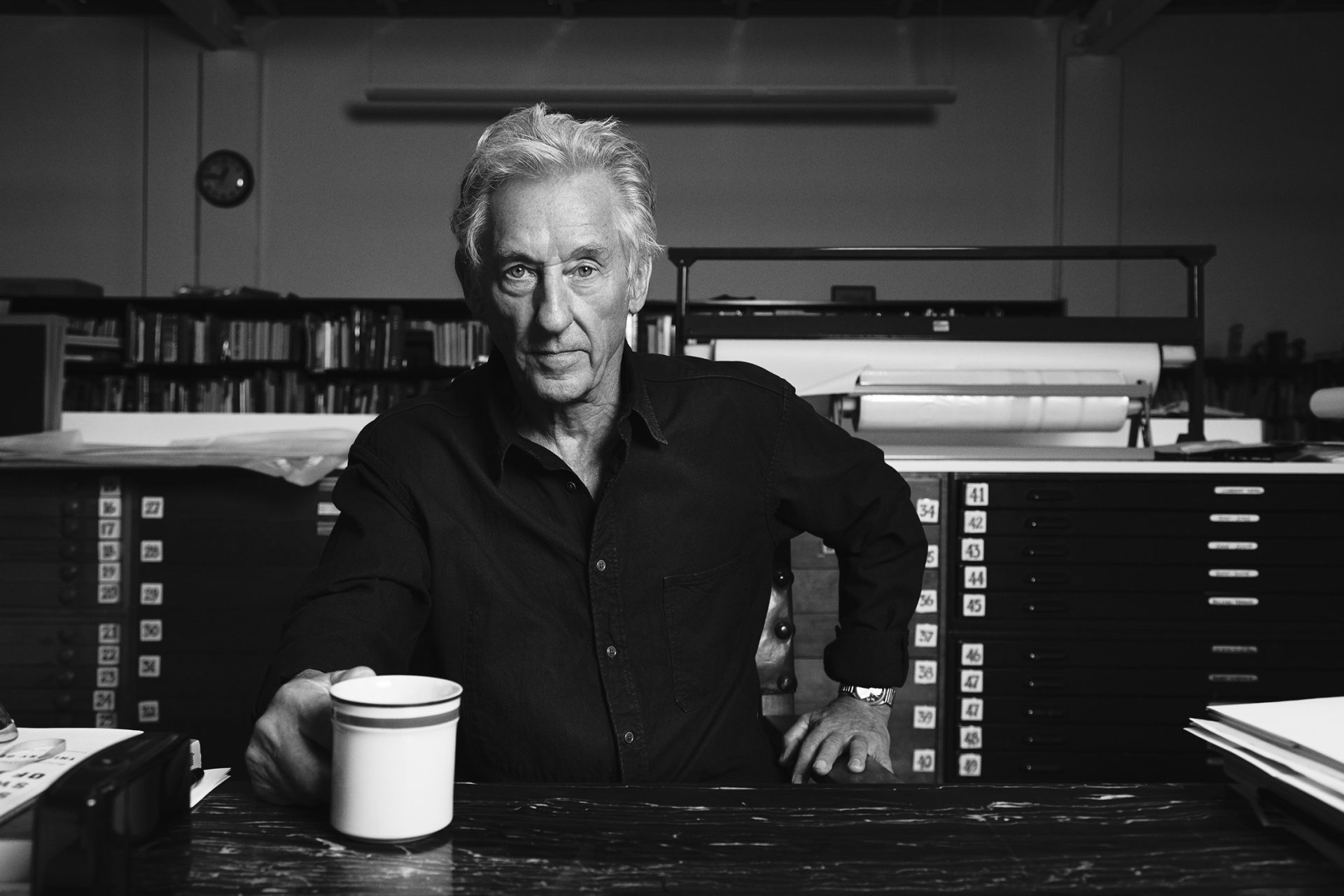 Ed Ruscha (*1937) is one of the most eminent and influential postwar American artists and a pioneer of Pop and conceptual Art. At the core of his iconic oeuvre including painting and drawing, photography, film and artist’s books, is the combination of text and image. The California-based artist’s work takes playful aim at visual and linguistic clichés of popular culture, dismantling our accustomed ways of seeing to reveal flashes of beauty and sublimity in the seemingly banal.

Ruscha’s painterly oeuvre derives from a perpetual expansion of the medium’s boundaries, often with recourse to visual strategies from advertising, graphic design and film. Early paintings from the first half of the 1960s show the artist breaking with Abstract Expressionism’s dogma of subjectivity to foreground ubiquitous brand logos or product packaging instead. Emphatically horizontal works including Large Trademark with Eight Spotlights (1962)—a monumental, deeply elongated rendering of the Twentieth-Century Fox logo—explore notions of landscape and the American West and recall widescreen CinemaScope film projections.

But the hallmark of his painting practice would soon be the incorporation of words and lettering, often in isolation against monochrome or graded color backgrounds. Works including OOF (1962) or Hollywood (1968) document shifts in the semiotic topography of their time and its cacophonous linguistic repertoire. Ruscha’s jarring use of text severed from its everyday context goes beyond reinventing the picture plane as a place for juxtaposing imagery and language. The conceptual space he creates also frees words from their overdetermined use in the media and everyday life, leaving them open to new associations in the mind of the viewer.

Much of the artist’s work since the 1970s involves a new type of picture that combines the illusory depth of landscape painting with the flat space of typography. At the center of these works are familiar-sounding, often tongue-in-cheek phrases and short sentences that could be described as “readymade” language from media, music, literature and advertising. Since the 1980s, these words have almost always appeared in a plain, functional font that Ruscha designed himself and ironically refers to as Boy Scout Utility Modern. The backgrounds of these works usually consist in sections of sky, nocturnal cityscapes or snowy mountain peaks—almost generic-looking images that nevertheless exude a kind of dim majesty. While paintings such as Not a Bad World, Is It? (1984) or Daily Planet (2003) seem to try to secularize transcendental emotions, others including his The End series (ongoing since 1991) engage with social and societal decay.

Ruscha’s output also includes highly influential artist’s books featuring his own photographs, most prominently Twentysix Gasoline Stations (1963) and Some Los Angeles Apartments (1965). The images collected in these publications also formed the basis for many of his immensely skillful, luminous drawings—works-on-paper for which the artist uses cotton pads and Q-tips to deftly apply gunpowder and ground pastels to rag paper. He has also experimented with such unconventional drawing media as the American medicine Pepto-Bismol, hot sauce, blood, fruit and vegetable juices, egg yolks, grass, caviar, chocolate or rose petals, and with supports including silk, satin or moire.

With visual elegance and a great deal of humor, Ruscha’s work shifts focus to what might be called the background noise of popular culture: to that which has become so ordinary as to escape notice, to what the artist himself once described as cultural “detritus.” His subtly anarchic approach reshuffles the codes that define our relationship to the present, injecting freedom into our usual habits of perception.

More views
Inquire
Ed Ruscha
She Didn't Have to Do That, 1974

People love sunsets. When the sun sets and melts into a beautiful display of colors in the evening sky, the experience is mesmerizing and deeply moving for nearly everyone. It is an event that repeats every day but is nevertheless perceived as a final act. There is a reason why millions of images of sunsets can be found online.
From the perspective of the fine arts, this excessively popular motif has lost its allure: It is seen as tacky and twee. To restore its reputation, the Kunsthalle Bremen is traversing the history of art with its exhibition Sunset: A Celebration of the Sinking Sun.

Curated by the museum’s CEO and Director Heidi Zuckerman, 13 Women marks the museum’s 60th anniversary, paying homage to the 13 women who founded the Balboa Pavilion Gallery, OCMA’s predecessor institution, which was opened in 1962. Presented in two rotations over the course of an entire year, 13 Women presents work from the 1960s to the present by the artists central to the museum’s collection. Centered on the work of 13 pioneering female artists, each of whom share the visionary qualities of the museum founders, the multigenerational group exhibition celebrates OCMA’s shared history—one distinguished by innovative and groundbreaking exhibitions, thoughtful programming, and a deep commitment to artists.

Five Ways In: Themes from the Collection
Group Exhibition
The Walker Art Center, Minneapolis
Through November 19, 2023

The Walker’s newest collection exhibition is organized by five familiar themes: portraiture, the interior scene, landscape, still life, and abstraction. Each of these areas features a diverse range of artists whose approaches to their subjects are often unconventional, innovative, and even surprising.
With more than 100 works—painting, sculpture, drawing, photography, and video installations—the exhibition Five Ways In: Themes from the Collection invites us to become reacquainted with favorites from the collection and discover new pieces by artists who are reinventing genres we thought we knew.

"The mattresses become not just litter in the landscape but more like scary animals."

Ed Ruscha has been casting his eye across the landscapes of the American west for over 50 years, taking in everything from gas stations to swimming pools to sublime mountain ranges. With their clarity and deadpan wit, his photographs, drawings and paintings impart a mood of playful awe on everyday monuments. The motifs for his new series Metro Mattresses were found, like so many of the subjects of his work, on the streets of Los Angeles.

Since the early 1960s, Ed Ruscha has created an extensive painterly, graphical, and photographic oeuvre. Ruscha first considered working as a graphic artist but soon developed a deep passion for painting and photography. Inspired by the American photography of the 1940s and 1950s, Ruscha developed an independent conceptual approach.

Ed Ruscha is one of the first Americans to criticize the mechanisms and means of pop culture in his work by making use of its means and visual language. In this way, he also paid homage to precisely these visual languages, on whose effectiveness and recognition effect he could and can rely. Furthermore, he is one of the protagonists in relation to the examination of language in the visual arts, as is already explicitly stated in the title of the Munich exhibition, because pictures are exhibited "with and without words".

Ed Ruscha
With and Without Words
September 13–October 19, 2002
Munich

"Hints of narrow pop culture meanings in conventionally insignificant elements and vice versa are the actual material (…) with which Ruscha deals with what has become classic and casual."

Monika Sprüth and Philomene Magers are pleased to present new pictures and works on paper by Ed Ruscha. He is one of the first Americans to criticize the mechanisms and means of pop culture in his work by making use of its means and visual language. In this way, he also paid homage to precisely these visual languages, on whose effectiveness and recognition effect he could and can rely.

Lettering in pictures immediately raises the question as to what the rest of the picture is meant to be doing. If it were only a "blank page", it would after all not be a picture any more. That which in relationship only to a figure that could only express anything through its visual form must now also establish a relationship to a figure that consists both of a form – the typography – and of a code defined clearly by convention namely writing, which also has a relationship to this codedness. Are they merely carriers of a sign, perhaps, and thus purely servile? Or the residual representatives of the pictorial principle, and thus principally non-code, but also a non-blank page?

“I am wide awake when I see artist books.”
The Believer, article by Stephanie LaCava, January 25, 2017