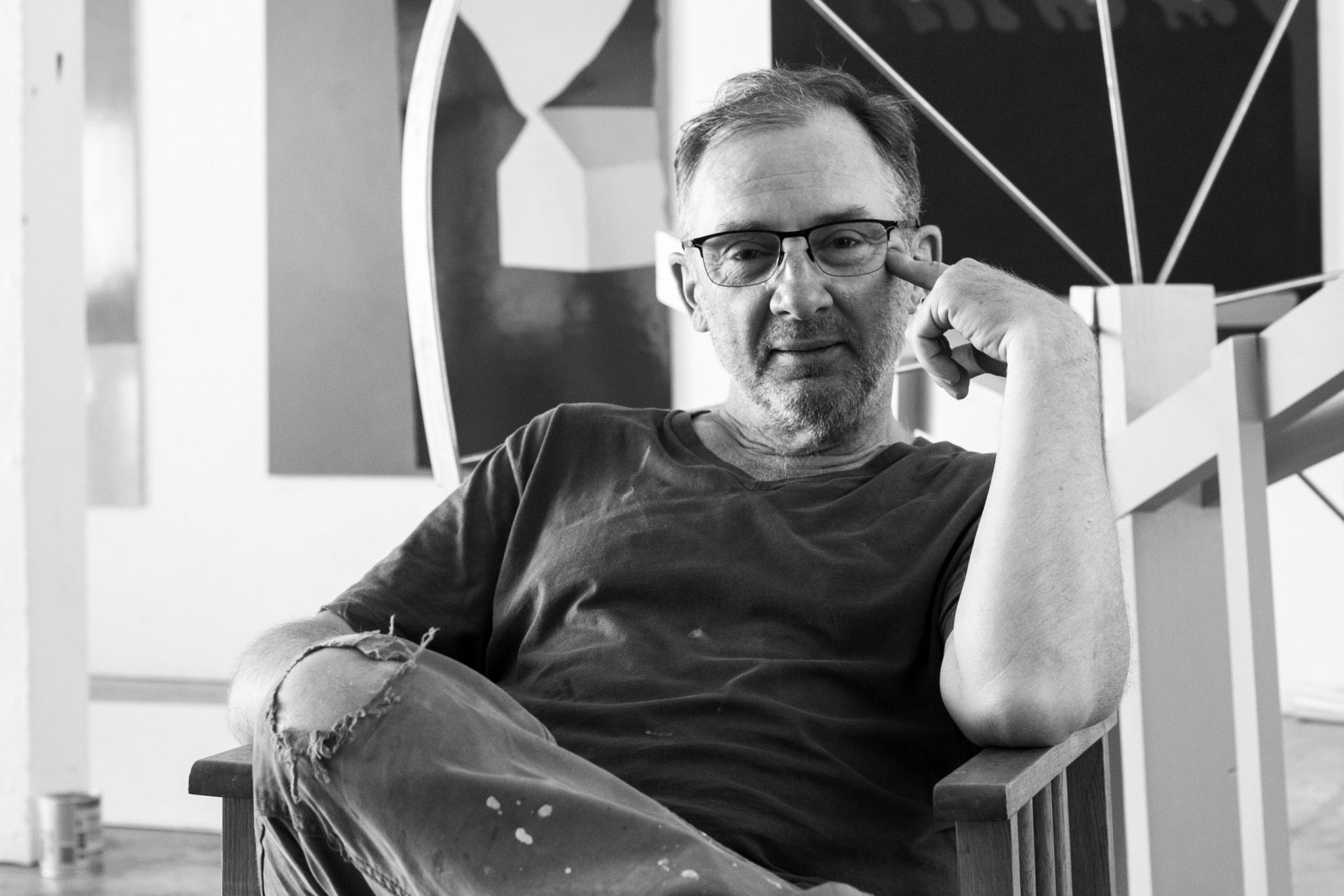 Gary Hume (*1962) is one of the leading British painters and sculptors of his generation. His oeuvre, often executed with high-gloss industrial paint on surfaces that include aluminum panels, infuses high modernist abstract formalism with an emphatic, sign-like quality. The London and New York-based artist develops his works from found images and personal memories, giving rise to a pictorial idiom in which horror and beauty, eroticism and melancholy, glamour and alienation, go hand in hand. His works are meditations on the sublime of the everyday, the fleetingness of memory and the fragility of life.

Hume came to prominence as a member of the Young British Artists generation who studied at Goldsmiths College in London. The Door paintings, his first body of work from the late 1980s and early 1990s, consists of abstract paintings that often recall the double swing doors of hospitals, museums, or cafeterias. The architectural reference of these works and their large, vertical formats reflect the viewer’s own body proportions. Their strength derives from a specific tension between hermetic modernism and mimetic representation. Rendered simply with pre-mixed enamel paint, many of these “doors” bear an unlikely resemblance to human faces: Their formal geometric vocabulary does not obliterate the figurative but instead allows it to return as something uncanny and repressed—as the product of the viewer’s automatic, anthropomorphizing gaze.

The 1990s and early 2000s saw a broadening of Hume’s artistic practice. The Door series was followed by well-known paintings of flowers, plants, birds, nudes and celebrities—paintings that hover in the charged space between abstract and figurative pictorial strategies, ethereal abstraction and ordinary, everyday phenomena. Having painted on canvas and hardboard at the beginning of his career, the artist now favors aluminum panels as a painting surface. His imagery is often taken from mass media and found photographs, which he projects onto the aluminum plates before tracing their contours—either scratching them directly into the enamel or creating three-dimensional “dams” and allowing the gloss paint to pool between them. His palette of pastel colors is often dominated by hues including antique pink, purple, brownish beige, or aquamarine. The high-gloss enamel he uses has the look of plastic when dried, a trait that contributes to both its retro-aesthetic, melancholic appearance and its insistently contemporary feel. Many of his paintings—the superimposed nude outlines of the Water Paintings series (1999), for example, or the paintings and sculptures of his cheerleader-inspired American Tan series (2007)—exude an elusive sexual energy. Other works including his iconic, bronze Snowman sculptures (ongoing since 1997), have a dark, comic edge or make use of drastic, corporeal pictorial content, as exemplified by The Shit and The Cunt (both 2009). For all the apparent banality of their references, each of these works exudes a surprising elegance as well.

Hume’s more recent works bear witness to a further shift in direction, both formally and in terms of content. Painting series such as Mum (2017) or Destroyed School Paintings (2019) and sculpture series including Wonky Wheels (2018) or Ghost Sculptures (2019) increasingly explore the artist’s private memories or can be understood as a personal grappling with such political tragedies as the refugee crisis, the wars in the Middle East and exhausting news cycles. Apart from the expansion of his sculptural practice, his new work is often characterized by his choice of paper as a painting surface. The material is less forgiving than the aluminum and does not allow any reworking, as the enamel Hume uses causes the paper to buckle. The result is a fragile, tactile and melancholic structure that often epitomizes the content of these works and their engagement with mortality and the fragility of memory.

While Hume’s work appears to negotiate pop-culture iconographies, it also short-circuits them with an exploration of the aesthetic, psychological and cultural limits of color and form. The directness with which it expresses both the pleasure and the horror of the decorative paradoxically evokes the sublimity of the ordinary and domestic. All of the artist’s work, regardless of medium, has a kind of characteristic emotional charge—the expression of a singular, provisional sensibility that is enigmatically transmitted to the viewer.

Inquire
Gary Hume
An Apple In The Orchard, 2015

Archipelago features a new series of large-scale, gloss-on-aluminum paintings built up with from interwoven lines and swathes of uninterrupted color. In some works, the almost uniform color of the picture plane is punctuated by cells or sections of contrasting hues. Hume often stretches his imagery to the point of abstraction, and the paintings in Archipelago have a haunting, ambiguous presence, without an obvious referent. Although the subject matter of the drawings and the paintings isn’t immediately clear, together the body of work represents Hume’s response to the humanitarian crises of the present day.

New Order: Art, Product, Image 1976 – 1995 presents a group exhibition selected by Michael Bracewell that surveys identity and image in British art, culture and society between 1976 and 1995. The exhibition originates from a discussion about the cultural status and art historical positioning of one of Peter Saville’s best-known works for Factory Records made in the early 1980s and blurring the boundaries between art, design, pop and product.

Thirteen brightly hued sculptures and four large paintings on paper by English artist Gary Hume present the viewer with immediate colour and curves. The sculptures, all from the series Wonky Wheels, are imperfectly round, wheel-like armatures rendered in steel and brightly coloured enamel.

After extensive renovations, Sprüth Magers reopens its London gallery on Grafton Street. It takes over the building with an expanded exhibition space occupying three floors. The gallery opens with a debut exhibition of new works by Gary Hume. His new body of works on paper mark a critical shift in his practice. Emerging from preparatory sketches, they revealed themselves as a unique and compelling body of work that has led the artist to develop an entirely new painting method.

For the artist’s second solo show in Berlin, the gallery will showcase an intimate series of never-seen-before works on paper, completed by the addition of gloss paint upon the glass of the frame. These multi-layered compositions will be shown alongside three recent paintings on aluminium.

For Gary Hume’s first solo exhibition in Berlin for over 15 years, he presents a selection of new work including Big Bird (2010), a major large-scale six-panel painting, a group of six paintings, four sculptures and, for the first time, five works on paper.

Gary Hume Loves His Mother. His Art Is a Valentine to Her.
The New York Times, article by Barbara Pollack, October 27, 2017

What lies beneath
The Spectator, article by Martin Gayford, August 26, 2017

Gary Hume at Tate Britain: ‘I Like to know what I’m doing most of the time’
Tate etc., interview by Nick Aldridge, Summer 2013