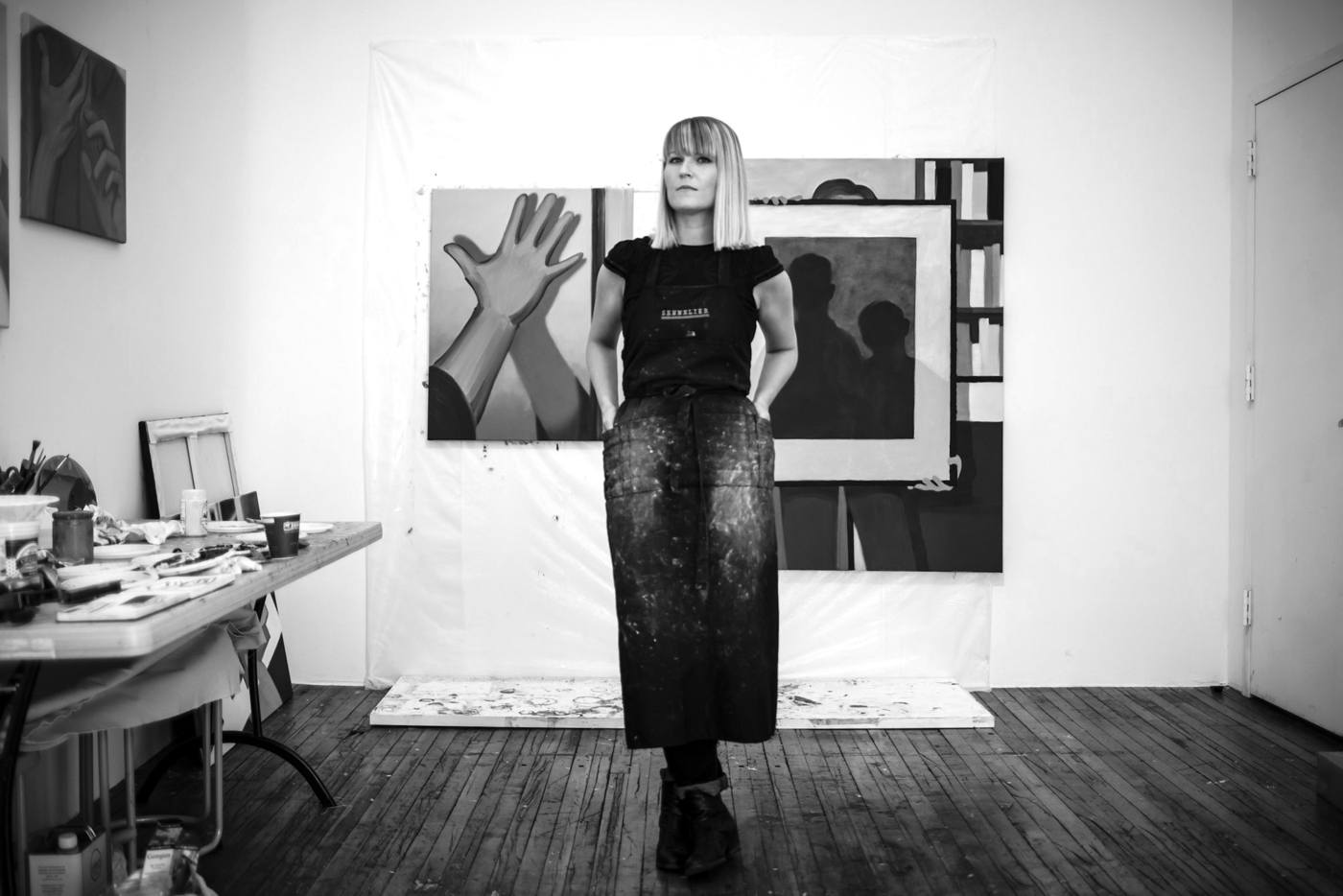 The work of Henni Alftan (*1979) stems from a deep engagement with the medium of painting, its methods and its histories, resulting in pictures of daily life that are intimately familiar and yet intriguingly unknowable. Born in Helsinki and based in Paris, the artist depicts everyday scenes and objects, often cropped or otherwise fragmented, each rendered with a studied economy of means. In spite of her pared-down aesthetic, Alftan’s experiments with color, texture, scale and perspective produce canvases rich in layered meanings that double as metaphors for seeing and comprehending the world through the physical properties of paint.

An array of forms populate Alftan’s visual world—a fruit being sliced, the shape of an open umbrella, pieces of jewelry and the wrist or neck they rest upon—offering snippets of private life that, while specific, seem part of an image bank of collective memory. The artist’s deliberate croppings both focus on the view at hand and hint at what lies beyond the canvas’ edges, in a manner that recalls cinematic space and the cuts of film. Yet any suggestion of narrative remains ambiguous and open-ended, with every work infused with a cool tension and suspension.

The artist approaches each of her figurative paintings beginning with an initial concept sparked by personal memories or observations, which Alftan first translates onto paper via sketches and notations. Her methodical, premeditated process, divorced from more common studio practices of life drawing or working from photographs, contributes to the hyperreal nature of her canvases. Alftan’s unique palette mixed from primary colors, as well as the diverse set of painterly gestures she utilizes—flat areas of color, smudged and blurred passages, strokes of thick impasto, sometimes all within one picture—likewise define her works’ unusual look and feel.

In devising her compositions, Alftan is interested in how viewers perceive even the simplest lines and dabs of paint, which are inherently abstract, as something recognizable. As she writes, “I’d like to see that moment, when the paint starts to refer, to resemble something other than itself.” This investigation into the act of looking filters through all of her works, whose scenes include framing devices such as windows, mirrors, scrims and screens that double the flatness and surface of the picture plane and offer literal entry points into each image. Hands and eyes also function as frequent metaphors and reminders of the artist’s and viewer’s perspectives. More recently, Alftan has produced a series of diptychs subtitled Déjà-vu that feature two sequential actions within the same scene; always installed in different rooms in order to be seen separately, they activate viewers’ memories and emphasize the space and physicality of her canvases as objects in-and-of themselves.

Alftan’s self-conscious exploration of painting extends to its millennia-long history, as she reframes gestures and details from sources as diverse as Northern and Italian Renaissance painting, Japanese woodblock prints and twentieth-century abstraction. Her attention to textiles also taps into painters’ historical fascination with rendering fabric; in Alftan’s hands, knitwear, hosiery and fur are densely built up or thinned out using oil paint, rendered so as to recreate their real-life textures. This continual negotiation between the interior world of her paintings and their three-dimensional realities drives Alftan’s practice, emphasizing the viewer’s physical encounter with the work in the present moment.

Inquire
Henni Alftan
By the Pool, 2020

Inquire
Henni Alftan
By the Pool, 2020

The exhibition by Henni Alftan is the artist's first solo show at the London gallery, presenting new paintings that give a comprehensive insight into her artistic oeuvre. Her figurative subjects negotiate the relationship between medium and image, featuring a subtle palette and flat rendering style to transform their everyday subject matter from object to motif. Alftan’s compositions use the tight framing of close range photography to explore the similarities between painting and image-making while offering a fragmented vision of reality.

Henni Alftan's solo exhibition Night-time is part of this year’s Gallery Weekend “Discoveries”. The Sprüth Magers Window presentation features ten new works by the Paris-based artist. Alftan’s figurative paintings negotiate the relationship between medium and image, employing a subtle palette and flat rendering style to transform their everyday subject matter from object to motif. Her pared-down compositions connote a stillness that oscillates between monotony and anticipation.