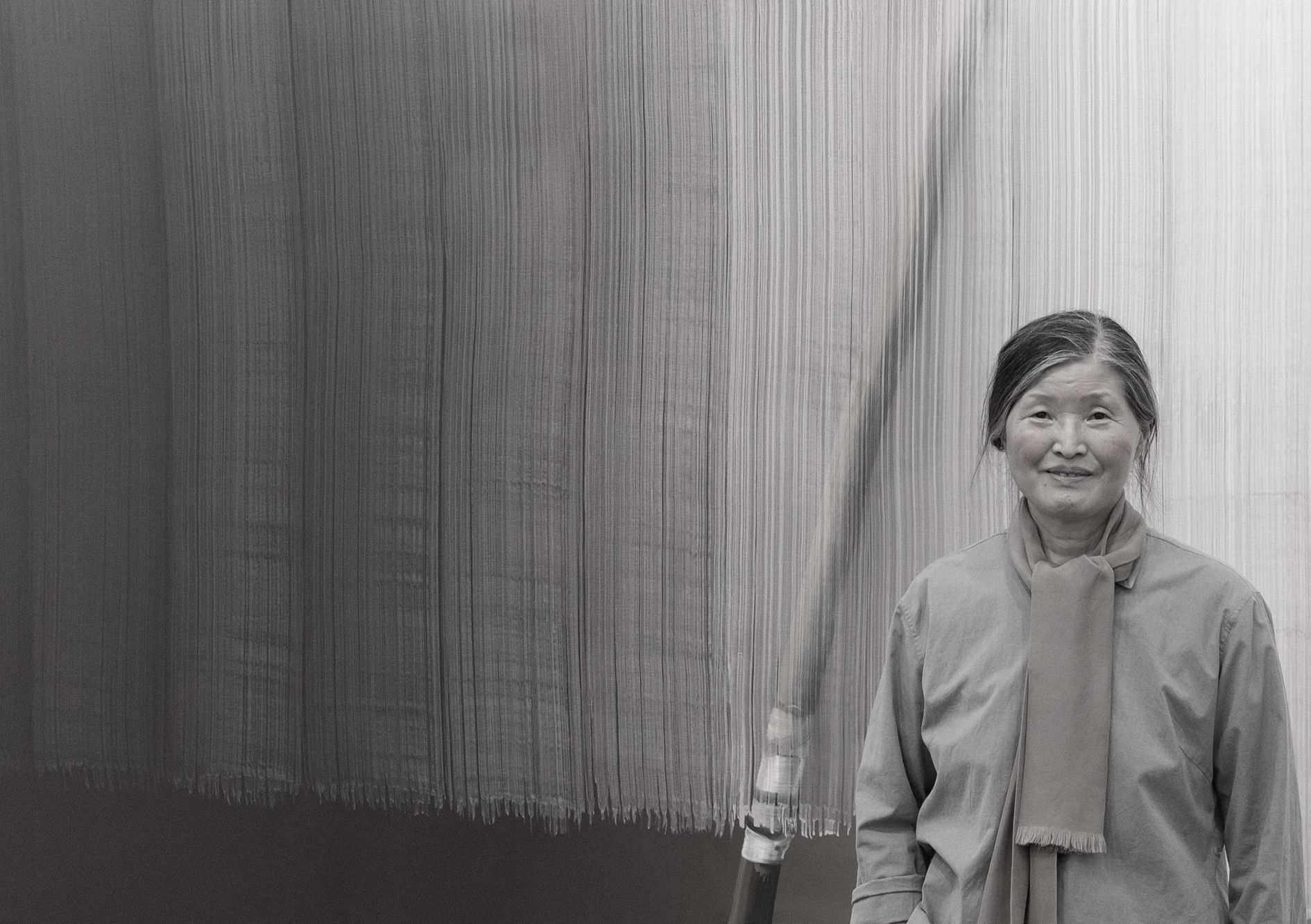 Hyun-Sook Song (*1952, Damyang, Jeollanam-do, Korea) lives and works in Hamburg, Germany. Since the 1980s, Song has created a body of work with several repeating motifs: clay pots, wooden poles, silk ribbons and woven textiles take centerstage atop tranquil monochromatic grounds. The presence of light and movement through and around the objects gives Song’s canvases a powerful, nostalgic invocation; each painting references the ephemeral nature of objects housed in the artist’s memory, as well as the ever-changing perception of memory more broadly.

Song traveled to West Germany in 1972 as a guest worker with plans to return after a few years of paid labor as a nurse. She kept diary entries and wrote letters home during this time, developing a visual-symbolic language in the process: calligraphic signs expanded to express her experience of western modernity as well as her deeply felt social isolation. Song’s art-making provided a means to fashion a home space that was now primarily in her memory, since the small rice-farming village where she was born also experienced the transformations of modernity in her absence.

Rather than return to Korea, Song completed her studies in art at the Hochschule für bildende Künste, Hamburg, where she evolved a unique mark-making technique using tempera paint—a blend of egg and pigment linked to the traditions of western medieval art. While tempera was commonly employed for its opacity, Song’s broad, sweeping brushstrokes are semi-transparent and applied with seemingly impossible economy. Often with only four or five strokes (her paintings’ titles record the total number), a fully formed object materializes across the picture plane as if from thin air.

Song paints while standing upright, with the canvas on the floor, and the creation of each work is itself a physical performance. Balancing on a wooden plank placed above stretched canvas, Song exacts the control and release of her brushstrokes with intense meditation and measured breathing; each calligraphic stroke records one unique motion and documents the artist’s inner state of mind, thus locating her firmly in the Post-Dansaekhwa movement. At the same time, the sober balance of abstraction and figuration in Song’s works relate to the history of minimalist and conceptualist painting, in which reduced, repetitive actions make space for endless variation.

For many of Song’s Korean artist contemporaries, the influence of western imagery and materials marked a departure from traditional eastern or Korean motifs; yet these remain the primary subjects of Song’s works. In terms of East and West, Song’s work is a production of both and neither—the expression of an artist living and working first and foremost in a domain of her own creation.

In Where at Home – Paint or Die, Jochen Hiltmann provides an intimate portrait of the life and work of Song Hyun-Sook. In writing this biography of the remarkable painter, Hiltmann considers how home, belonging, and cultural and national identity relate to fine art. Hiltmann shows how Song Hyun-Sook’s paintings bridge the traditions of East Asian calligraphy and European modernism, joining the art and culture of the East and the West, to reveal complexes of sensibilities one single brushstroke at a time. Richly illustrated with seventeen color reproductions, this book offers unparalleled insight into the work of a profound and significant contemporary artist.

Sprüth Magers is delighted to announce the gallery's first exhibition of South Korean artist Hyun-Sook Song. In her practice, Song has developed a distinctive style and technique, using tempera, a type of paint consisting of pigments mixed with egg, as the main material. Despite having lived in Germany for fifty years, Song’s artistic outlook has been strongly influenced by Eastern philosophy and calligraphy as well as by her approach to nature and the body. A reduced formal language, each brushstroke represents one unique movement and documents the artist’s inner state of mind—thus locating her firmly in the Post-Dansaekhwa movement. Reaching a state of utmost concentration and meditation, Song considers painting a performative happening.

Where at Home: Paint or Die
Art Review, article by Mark Rappolt, November 2021

Hyun-Sook Song (*1952) lives and works in Hamburg. Song studied at the University of Fine Arts of Hamburg between 1976 and 1981 and studied Korean art history at Chonnam National University in Gwangju. Selective solo & group exhibition include the Hamburger Kunsthalle, the National Museum of Contemporary Art in Seoul, the Gwangju Museum of Art, the Poznan Biennale, the Leeum Samsung Museum of Art in Seoul, the Mori Art Museum in Tokyo, the Asian Art Museum in San Francisco, the Berkeley Art Museum in San Francisco, the Deichtorhallen in Hamburg and at many more locations. Hyun-Sook Song’s work is included in the collections of the following institutions: Kunstmuseum Bern, Kunstmuseum Bonn, Hamburger Kunsthalle, Kunstmuseum Düsseldorf, Leeum-Samsung Museum of Modern Art, Mori Art Museum in Tokyo, Fukuoka Asian Art Museum, Seoul Museum of Art, Gwangju Art Museum and Gyeonggido Museum of Art.