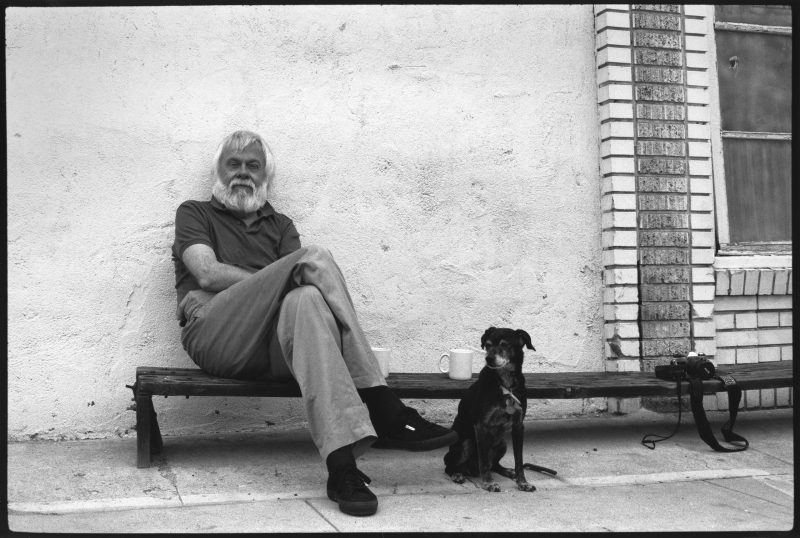 John Baldessari (1932–2020) was a pioneer of American conceptual art. Through his rejection of traditional notions and boundaries, and his expansion of our understanding of what art can be, he became one of the best-known artists of our time. Baldessari was based in Los Angeles and profoundly impacted several generations of visual artists—from David Salle and Jack Goldstein to Cindy Sherman and Barbara Kruger. He has been associated with the gallery since 1995.

If there was a connecting thread in Baldessari’s multifaceted oeuvre, it was his willingness to grapple with the clichés and expectations that shape a viewer’s perception of a work of art. Baldessari’s Cremation Project (1970), when he rejected the painted image by ceremonially burning all the paintings that he had made between 1953 and 1966 (and could still access), verges on the legendary. Other, equally well-known works show the artist directing his incisive humor against conceptual tropes as well. One example is his performance and video I Will Not Make Any More Boring Art (1971), in which he copies the titular sentence over and over in a ruled notebook in what amounts to a kind of schoolboy punishment. Viewers of Baldessari Sings LeWitt (1972), another example, are treated to the artist’s rendition, in song, of Sol LeWitt’s thirty-five Sentences on Conceptual Art (1968).

Baldessari created a wide range of different works in his long career, with output that included film stills strategically adorned with colored dots, art-philosophical jokes in which text about the image replaces the actual image, motifs serially reconstructed as monochrome Pantone color plates and much more. His art relied on the insight that pictures are constituted first and foremost in the minds of viewers. The artist often pointed to the influence of the structuralism of Claude Lévi-Strauss, as well as the French New Wave, and in particular the films of Jean-Luc Godard. Key strategies of his work included the associative connecting of words with other words, the juxtaposing of images and jolty combinations of words and pictures. He was interested in the spaces between these juxtapositions, the elements that are still missing or remain hidden. Baldessari was particularly attuned to the gaps that develop between the meaning of individual elements and how the viewer fills them in with his or her own subjective take on the work.

In this way, Baldessari challenges the passive gaze and the beholder’s sense of security. His work toys with the desires and expectations of viewers, appealing to their imaginations, their memories and their tendency to read a story into every image. His pieces lead to a point where understanding seems within grasp but still remains elusive, disappointing the viewer’s desire for narration and urging them to come up with their own story.

Characterized by an unshackled and uninhibited take on art and the world in which it is made, his oeuvre shimmers with a cheerful lack of concern, a tidy laconicism. Yet it also has a surprising urgency, an unexpected emotional impact, a sudden poetry, and an uncompromising freedom. Anything resembling preconceived meaning, his works seems to say, should be pushed aside, and replaced with an invitation to the viewer to think anew.

John Baldessari
The Space Between Gun and Cigarette., 2019

John Baldessari
I am Making Art, 1971

The American artist John Baldessari created conceptual art that asks questions about what art is, how it is made and what it looks like. Combining imagery from pop culture with linguistic explorations, his work challenged artistic norms and limits throughout his entire career. This exhibition of around thirty pieces, is the first extensive presentation of his work in Sweden.

Where Art Might Happen: The Early Years of CalArts
Kunsthaus Graz
July 1–September 20, 2020

This group exhibition presents the legendary founding years (1970–1980) of the American art university California Institute of the Arts (CalArts), which gathered numerous well-known teachers and personalities such as Allan Kaprow, Judy Chicago, John Baldessari and Alison Knowles and brought forth such artists as Mike Kelly, Stephen Prina and Suzanne Lacy.

The Kunsthistorisches Museum Vienna, in cooperation with the Archive of the Gesellschaft der Musikfreunde in Vienna, presents an unusual homage to Ludwig van Beethoven (1770–1827), the great representative of the First Viennese School. Beethoven’s popularity remains unbroken, even 250 years after his birth.

Two hundred and fifty years after his birth, Ludwig van Beethoven is more than ever an icon. In the midst of all the celebrations to mark his birthday, BOZAR opens the doors of the HOTEL BEETHOVEN. This exhibition about the composer, his music and his ideas will look at how Beethoven remains relevant to us today. An exceptional musical innovator, he also provides a springboard for questions about the democratic and physical power of sound. How can we listen with our bodies when hearing is not an option?

The exhibition presents John Baldessari’s final series of thirty paintings, The Space Between (2019), that demonstrate the artist’s characteristic combining of text and image. Through spatial overlays and excisions, the works at once deflect and direct our attention, while also betraying the processes by which we encode and decode the world around us. Simultaneously banal, surprising and poignant, Baldessari’s last works beautifully encapsulate the thrust of his artistic project as a whole: to explore the amorphous spaces between things, people and ideas.

The exhibition features twenty-seven works from Baldessari’s new series of large-scale paintings based on the ubiquitous Emojis. From his earliest text paintings in the late 1960s to his more recent ‘storyboard paintings’, he has always reveled in the playful dislocation between text and image, expanded here in this most recent body of work. Created earlier this year, the Emoji paintings focus on the increasingly complex ways in which we exchange and interpret information in everyday life. Emojis’ are a pictograph-specific keyboard that features glyphs in categories such as ‘smileys and people’, ‘animals and nature’, ‘food and drink’, ‘objects’, and ‘flags’. They are increasingly used as a form of electronic communication, but their equivocal nature means that issues of context and cultural specificity often complicate their interpretation by recipients – it is this theme that the artist explores in his paintings.

Sprüth Magers has been exhibiting John Baldessari for almost 30 years, and we are delighted to open our Los Angeles gallery with one of the west coast’s greatest living artists. Featuring banal found photographs, altered with his trademark blocks of rich colour, accompanied by equally banal snippets of text that appear like captions beneath the images, the new paintings present the viewer with a pleasing conundrum. Text and image are sutured together on the picture plane, yet the viewer will struggle to find any useful correspondence between them.

John Baldessari's uninhibited and tabooless perspective onto art and the world in which it arises, along with his ambivalent attitude toward painting, Concept Art, and Appropriation Art, have had an enduring influence on several generations of visual artists – from David Salle and Jack Goldstein to Cindy Sherman and Barbara Kruger. The storyboard canvases on display here, measuring up to 2.60 meters in height, were printed in an inkjet process and overpainted with acrylic by Baldessari here and there. Each storyboard consists of two photographs ripped out of newspapers and magazines, a text panel which may implant a scene in the head of the viewer, and a color chart which takes up the hues of the individual pictorial elements.

Baldessari's focus on allegorical and iconographical traditions is recognizable in his new work-group Double Feature:. What is significant of these image-text montages is the utilization of concrete pictorial motifs from the history of modern art from Henri Matisse, Kurt Schwitters, and Max Ernst, all the way to Francis Picabia. From these models, Baldessari extracts in his customary manner selected elements which are printed onto canvas and are individually overpainted by himself. Oscillating between collage and painting, Baldessari's versions do not consist of decontextualized copies but instead present autonomous originals which repeat painting and its forms of appearance from a different perspective.

Widely considered one of the most influential artists of the last forty years and one of the founding fathers of conceptual art, Baldessari has with this new exhibition both returned to his characteristic strategy of utilising and embellishing found visual material and extended his interest in the physical form and social meaning of particular parts of the human body. Each of the ten large-scale works is composed as a diptych of found photographs or media images including hands and/or feet.

Ear Sofa; Nose Sconces with Flowers (In Stage Setting) is the first ever tableau vivant created by acclaimed American artist John Baldessari, a living installation which epitomises the wry wit, visual ingenuity and conceptual vigour which has defined the artist’s practice for almost five decades. The installation centres on an ear-shaped sofa, on which a model sits, posed and poised, flanked on either side by a pair of nose-shaped, wall-mounted sconces. The sofa is framed by a large decorative semi-circular arch, and the gallery’s glass frontage is shrouded by a sheet of sheer stretched silk.

Uneasy Angel / Imagine Los Angeles is a thematic exhibition comprising the creative production of contemporary artists, writers, and filmmakers living and working in Los Angeles. In light of Umberto Eco’s and Jean Baudrillard’s notion of hyperreality, the exhibition perceives Los Angeles as just such a place—with unclear boundaries separating reality and the imaginary.

John Baldessari
Trying to look between things instead of at things
June 2–July 31, 2001
Munich

John Baldessari on his giant emoji paintings: ‘I just wondered what they’d look like large’
The Guardian, article by Matt Stromberg, November 27, 2017

Somebody To Talk To
TATE ETC., interview by Jessica Morgan, Autumn 2009