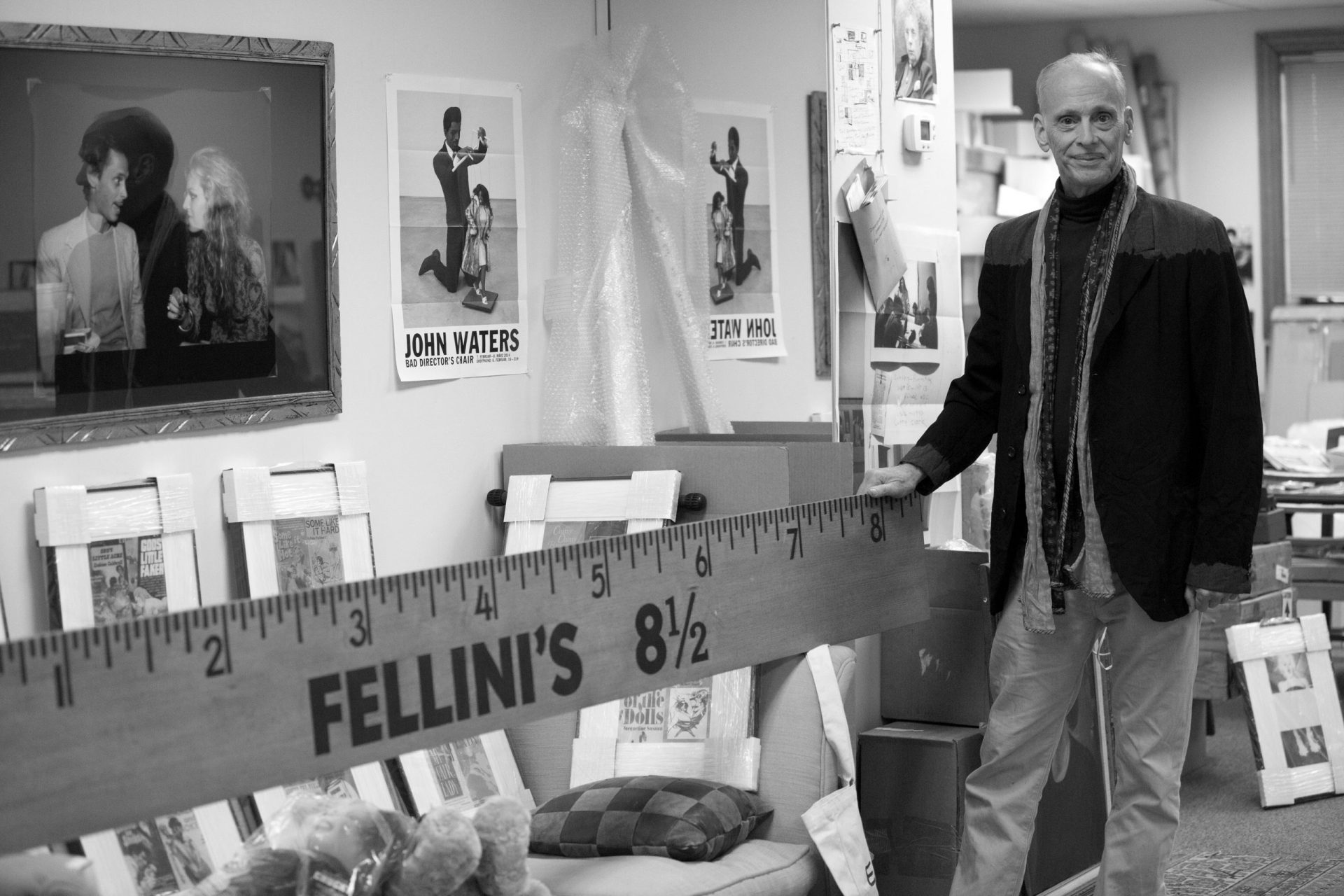 John Waters (*1946) is an American filmmaker, writer, author, actor and artist. As one of the most celebrated directors in American independent cinema, he has produced an array of cult films in the 1970s and 80s, such as Pink Flamingos (1972), Polyester (1981), and Hairspray (1988). Casting his eye over some unlikely corners of the film business, he later turned to photographic-based work in the 1990s with the same wit and audacity found in his films. At his vibrant best, when flaunting Hollywood’s rules or revelling in bad taste, he brings this rebellious streak to his artwork whichever the medium.

An uncompromising cultural force and the so-called “Pope of Trash”, Waters bridges the gap between high and low art with a lively counterculture aesthetic. Born in Baltimore, his work draws inspiration from the city’s culture and landscape, and his early film works were all shot in and around the city, including his first short film, Hag in a Black Leather Jacket (1964), which was produced for just $30. Early films celebrate the notion of camp—particularly within the genres of exploitation comedy and transgressive cult films—presenting exaggerated characters in outrageous situations, with hyperbolic dialogue and alliterated character names. His Trash Trilogy (Pink Flamingos, Female Trouble, and Desperate Living) pushed the boundaries of conventional propriety and film censorship. After he found more commercial success with the 1981 hit Polyester, Waters still retained the tongue-in-cheek outrageousness that made him such a cult favorite. The 1988 film Hairspray became a runaway success, eventually being adapted into a Tony Award-winning musical. In 2015, the British Film Institute celebrated Waters with a retrospective honoring his five decades in filmmaking.

In addition to filmmaking, Waters also works as a visual artist across media such as installation, photography and sculpture. Inspired by his work in cinema and love of the film industry, Waters began making his photo-based work in 1992 by considering his fastidious role as a consumer and watcher of films. Using his insider knowledge to stay alert to those telling moments and details that would often be overlooked by the untrained eye, he snaps a single frame from a film, often from a television, recombining these images into a storyboard-like sequence—thus re-directing some of his favorite films through playful acts of appropriation. Cut off from their source, the stills take on a range of new meanings, and the strip sets off a loose, irresolvable set of associations or narratives. His renegade attitude and fearless approach to his subject matter allows him to reveal how celebrity and identity interact, often using humor to unlock cultural codes and moral pieties.

Hollywood’s Greatest Hits features a selection of works, most of which have never been seen before in LA, that shed light on John Waters' decades-long, wide-ranging art practice, and in particular, his humorous and irreverent takes on the movie industry.

John Waters' first ever exhibition in London, Beverly Hills John, is a fresh set of affectionate barbs about the movie biz. While he hasn’t lost his mordant wit or sense of mischief, Beverly Hills John finds Waters in a more reflective mood, asking the question: ‘Since celebrity is the only obscenity left in the art world, where do I fit in?’ He also hopes to resolve issues about childhood fame, false glamour, the horrors of nouveau-riche excess, his ongoing sexual attractions and the possible risk of ‘careericide’ with dignity.

One of the most celebrated directors in American independent cinema, John Waters is at his vibrant best when flaunting Hollywood’s rules or reveling in bad taste. The director of Pink Flamingos (1972) and Pecker (1998) brings the same wit and audacity to the art gallery. Perched upon his Bad Director’s Chair, Waters has cast his eye over some unlikely corners of the film business, transforming his observations of all the glamour and heartbreak of Hollywood into photographic essays and narrative sculptures that are both ridiculously honest and brutally humorous. Waters becomes the self-appointed press agent for his newly conceived “little movies” who would surely be fired the first day of a shoot by the furious producers.

John Waters: ‘I never wanted to be a cult film-maker’
The Guardian, interview by Nadja Sayej, October 8, 2018

John Waters: ‘I want to be despised’
The Guardian, article by Stuart Jeffries, June 30, 2015