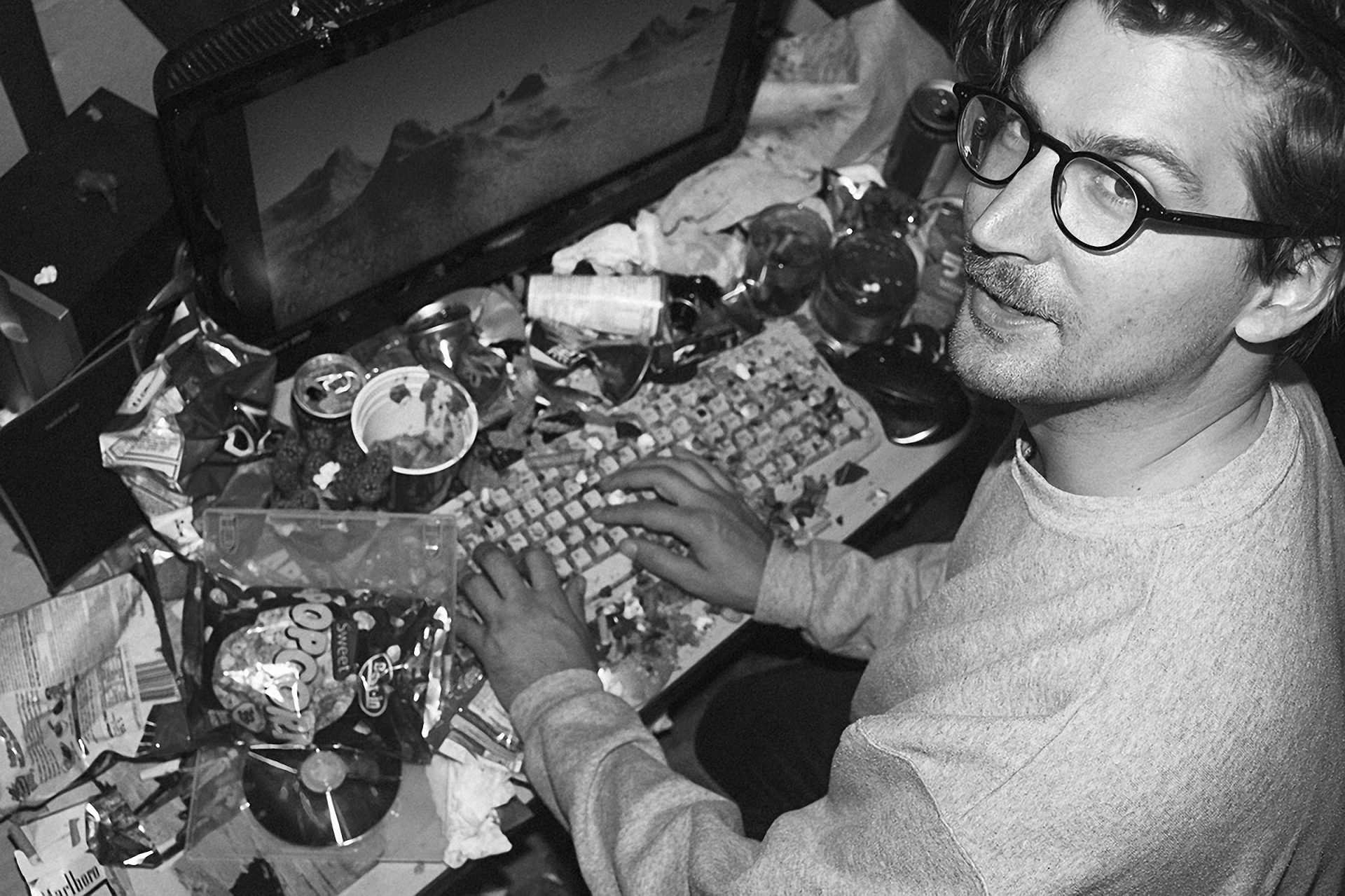 Jon Rafman (*1981) is acclaimed for a multifaceted oeuvre that encompasses video, animation, photography, sculpture and installation. His quasi-anthropological works—often incorporating internet-sourced images and narrative material—investigate digital technologies and the communities they create, focusing on the losses, longings and fantasies that shape our technology-infused lives today. The Montreal-based artist turns an empathic but critical eye on the internet age, investigating experiences of alienation, nostalgia, loneliness and grief.

Rafman’s complex take on internet technologies is implicit even in his earliest work. The Nine Eyes of Google Street View (2007–present), an ever-growing collection of photographic images and frequently updated website, finds him rummaging the panoramic street view feature of Google Maps for unusual images. Like a cyber flâneur he stumbles upon surprising moments of humanity, vulnerability and sometimes beauty; his discoveries include pictures of children playing in run-down neighborhoods, horses and reindeer roaming the streets, poetic landscapes, grumbling prostitutes and police arrests. By showing these automatically captured images in a new light, Rafman reveals the visual grammar and blind spots of Google’s technology.

Not all of the artist’s works use found images. While the bust-like objects of his series New Age Demanded (2012–present) evoke classical modernist sculptures, they were actually created using digital imaging techniques and technologies including 3D printing or 3D model-based carving. A series of large-scale photographs titled You Are Standing in an Open Field (2015) juxtaposes grimy computer keyboards and trash-heaped desks with pastoral landscape painting backgrounds. Sticky Drama (2015), a short about the loss of digitally stored memories, is Rafman’s first live-action film.

Many of the artist’s most recent works use 3D animation. Examples include his Dream Journal 2016–2019, for which Rafman documents his daily dreams before mixing them with found narratives from mythology, video games and TV series. The animated video essays Legendary Reality (2017), SHADOWBANNED (2018) and Disasters under the Sun (2019) offer a serious look at the current human condition with a visual language reminiscent of science fiction films.

Rafman’s films and videos are often set to hypnotic, experimental-electro music soundtracks by artists including Oneohtrix Point Never or James Ferraro. Although available online, they are most effectively experienced in specially-designed sculptural installations. These emphatically physical installations squeeze viewers into booths, transport them to the bedroom of a typical North American teenager, invite them to lie on polyurethane foam seating or in pools of plastic balls.

All of Jon Rafman’s works explore the vicissitudes of self-formation in the digital age. They ask what it means to live in a time when technologies structure our every waking hour, or when the price of easy fulfillment of our needs is loneliness in front of a computer screen.  They explore the ever-present experience of living in a world where nothing is permanent, but nothing is forgotten.

Jon Rafman
You Are Standing in an Open Field (Pandemonium), 2020

Inquire
Jon Rafman
You Are Standing in an Open Field (Mental Traveler), 2020

Inquire
Jon Rafman
You Are Standing in an Open Field (Pandemonium), 2020

Inquire
Jon Rafman
You Are Standing in an Open Field (Mental Traveler), 2020

Jon Rafman
Ɛցɾҽցօɾҽʂ and Grimoires
Schinkel Pavillon, Berlin
Through December 31, 2022
On the occasion of Berlin Art Week Jon Rafman will present two new narrative film works in the Schinkel Pavillon’s iconic lower-level. мιησя ∂αємση, Vol. 1 (2021) tells the story of two intersecting lives and fortunes of two young men Billy and Minor Daemon, set in a surreal virtual dystopia not unlike our own. In ₱Ʉ₦₵₮ɄⱤɆĐ ₴₭Ɏ (2022) a gamer’s past coalesces with uncanny obstacles, part-human avatars and early internet aesthetics as we follow him on an unsettling journey through the dark web in search of an old computer game which has seemingly disappeared from the internet without a trace.

What a Wonderful World
Group Exhibition
MAXXI – Museo nazionale delle arti del XXI secolo, Rome
Through March 12, 2023
The title refers to today’s reality and hopes for tomorrow: through the visionary gaze of the artists, it evokes—sometimes in an ironic way—our time riddled with uncertainties and challenges and multiple human and technological possibilities of significant evolutions and drive towards the future. The works on display investigate the major issues of scientific and technological progress concerning the challenges of the contemporary era: the hybridisation between species and ecosystems, between real experiences and virtual interactions, between changes and grafts of identity and gender, in the reconfiguration of the social and political dynamics of our time.

A Gateway to Possible Worlds
Group Exhibition
Centre Pompidou-Metz
Through April 10, 2023
The American writer Ray Bradbury said: "Science fiction is the art of the possible." Under the guise of anticipating the future, it speaks to us of the present. It is a laboratory of hypotheses that manipulate and extrapolate the repressive norms and dogmas of today's world, its ambitions, social afflictions, opportunities and perils. A Gateway To Possible Worlds exhibition brings together over 200 works from the late 1960s to the present day. Art & science fiction whisks visitors away to a 2300m² sci-fi world. It puts the spotlight on the bonds between imaginary worlds and our reality with the help of artists, authors, architects and film directors. It builds on current demands for 21st century utopias to spark debate, inspiration and a form of hope.

Sprüth Magers and Oōeli are delighted to announce a solo exhibition by Jon Rafman at B1ock Gallery in Hangzhou. These new quasi-anthropological works—ranging from algorithmically-generated paintings to video installations often incorporating internet-sourced images and narrative material—investigate digital technologies and the communities they create, focusing on the losses, longings and fantasies that shape our technology-infused lives today.

In his new solo exhibition at Sprüth Magers, Berlin, Jon Rafman presents an immersive space with recent works which explore themes of nostalgia, youth, false memory, and the fragmentation of the individual. He harnesses the creative potential of machine learning and continues his long-standing practice of using the latest technology to bring its subterranean implications to the surface.

In Dream Journal 2016-2017, the latest iteration in his ongoing video series, Jon Rafman has created an immersive installation within the Berlin space. Rafman is recognized for an interdisciplinary practice that spans photography, sculpture, video, virtual reality, and installation. His work explores the impact of technology on contemporary consciousness, incorporating the rich vocabulary of online worlds to create poetic narratives that critically engage with the present.

This exhibition at Sprüth Magers, Los Angeles, introduces films and animations by Jon Rafman and Stan VanDerBeek, two artists from different generations, both exploring and working with associative imagery and their effect on the conditioned and the subconscious mind. Derived from the notion of screens and projections, their installations evolve around an immersive cinema and animation experience.

People are repeating History without the Knowledge of their doing so: Jon Rafman
Spike, interview by Aaron Moulton, Winter 2020