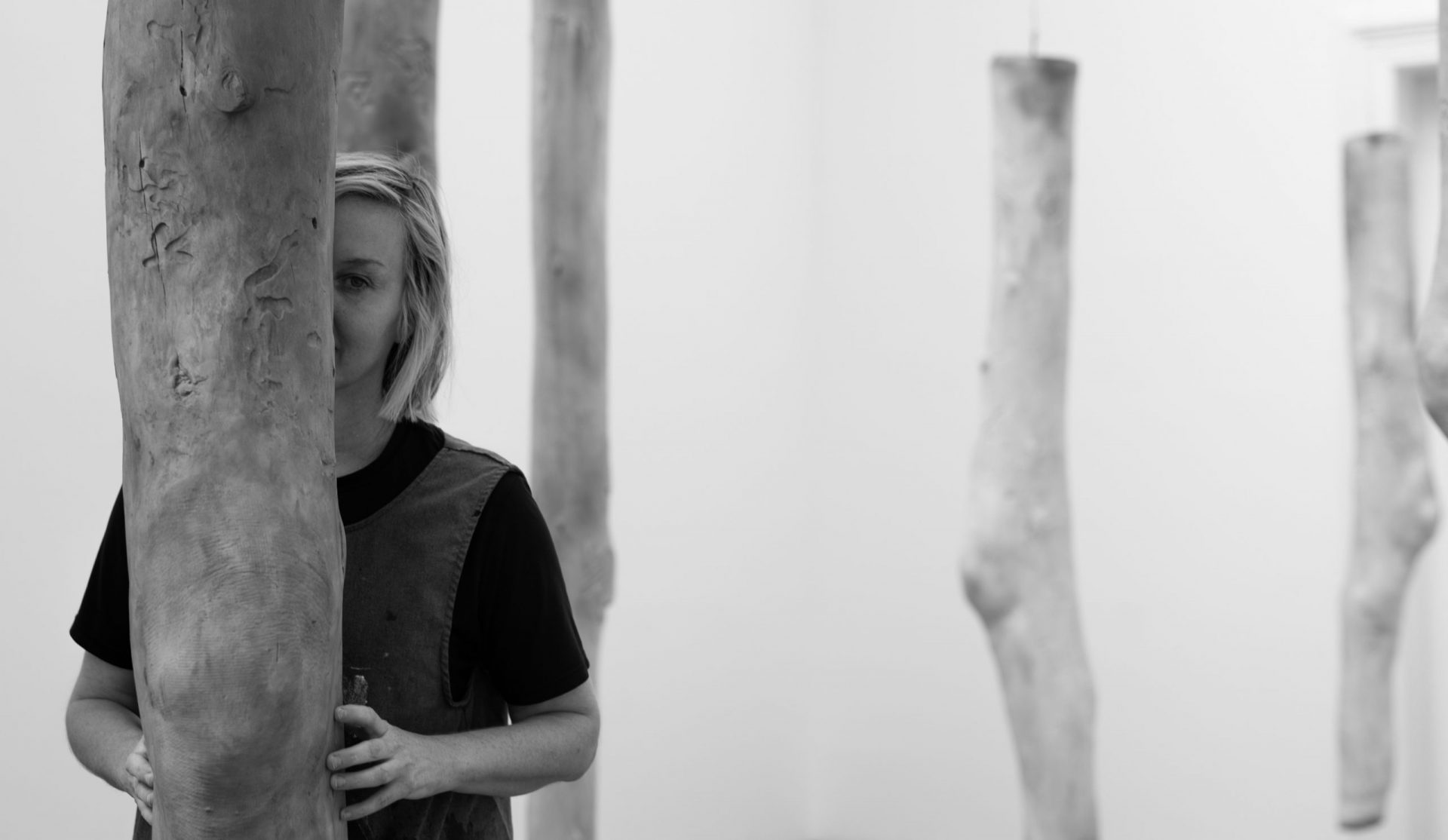 Kaari Upson (1970–2021) worked in a wide array of media including sculpture, video, drawing and painting. For nearly two decades, she constructed a singular artistic universe that melded autobiographical and collective traumas, fears and fantasies and often illuminated what might be called “Americanness” or the “American psyche.” The Los Angeles-based artist’s artful conjuring of abject imagery targeted viewers’ psychological comfort zones, confronting them with visceral and affecting evocations of loss and instability.

The prodigious, media-spanning scope of Upson’s conceptual practice is evident even in her earliest body of work: The Larry Project (2005–12)—a vast compendium of drawings, sculptures, videos and performances—takes as its point of departure a clandestine visit to a burned-down house in her parents’ neighborhood in San Bernardino, the artist’s hometown. Though Upson never met the house’s former occupant (whom she later called “Larry”) she reconstructed the life she imagined he led, fueled by sex, wealth and fantasy, from the home furnishings, photographs and diaries he abandoned. In addition to paintings, sculptures and drawings—including a full-size “Larry” doll who makes regular appearances—Upson’s project comprised videos and installations in which the artist herself appears wearing homemade silicone prostheses of breasts and genitalia in a nod to her muse’s real-life visits to the Playboy Mansion.

Subsequent bodies of work, which likewise wove together reality and fantasy, include her celebrated sculptures made of silicone, latex, urethane and fiberglass, cast from mattresses, sofas and other domestic objects and painted in a range of vivid tones; as well as MMDP (My Mother Drinks Pepsi) (2014–17) inspired by Upson’s mother who enjoyed a Pepsi every day. MMDP comprises complex sculptures made of Pepsi cans reminiscent of ancient artifacts—an effect created by filling the empty soda containers with liquid aluminum so that their surface looks charred—as well as videos that feature the artist among the aisles of Costco megastores where her mother shopped. Throughout these projects, drawings often provided the springboard for accompanying sculptural works. Large-scale and reminiscent of detailed journals, Upson’s drawings are filled with precisely rendered images and text, and they often took years to complete as the artist repeatedly returned to them to add visual, temporal and intellectual layers to their lush surfaces.

The scale and ambition of Upson’s projects steadily expanded over the course of her career, culminating in room-sized installations blending set-like structures, sculptures, performative videos and sound. For the 2019 Venice Biennale, she recreated her mother’s childhood dollhouse and that of a friend by enlarging them to over-life-size scale. The resulting installation, There is No Such Thing as Outside (2017–19), offered a meditation on the self and the other and the insistent pull of nostalgia. Upson’s exhibition Go Back the Way You Came at Kunsthalle Basel (2019) similarly transformed the exhibition space into a weighty, multi-partite homage to another loaded object: the felled tree outside her childhood home. In both bodies of work, disquieting videos feature performances by the artist and a second woman, each made up to approximate each other’s faces, as they compulsively repeat fragments of speech and revisit repressed memories and traumas.

Overall, Upson’s work considers the overlaps, fissures and disjunctions between our interior worlds and exterior reality, not just conceptually, but also through her embodied process of casting, “skinning” and inverting objects. Embracing quasi-archaeological, forensic strategies, the artist created uncanny, layered scenarios with the power to surface repressed desires and memories—both personal and collective—with unexpected force. Her work evokes radically destabilized subjects and presents a critical portrait of late-capitalist American culture with its many fetishes, obsessions, neuroses and repressed fantasies.

Announcing Global Representation of her Trust

Sprüth Magers is honored to announce its global representation of The Kaari Upson Trust, working with the artist’s estate to support her legacy in the years to come. The influence of her haunting sculptures, paintings, drawings, installations and videos continues to reverberate through contemporary art practice despite her death in August 2021 at the age of 51. Through forthcoming exhibitions and projects, Sprüth Magers looks forward to this partnership and to sharing Upson’s work with audiences across the world.

Sprüth Magers is honored to announce its global representation of The Kaari Upson Trust, working with the artist’s estate to support her legacy in the years to come. The influence of her haunting sculptures, paintings, drawings, installations and videos continues to reverberate through contemporary art practice despite her death in August 2021 at the age of 51. Through forthcoming exhibitions and projects, Sprüth Magers looks forward to this partnership and to sharing Upson’s work with audiences across the world.

More views
Inquire
Kaari Upson
THERE IS NO SUCH THING AS OUTSIDE, 2017–19

Inquire
Kaari Upson
In Search of the Perfect Double (I), 2016

Your message has been sent.
Current and Upcoming
Sin Wai Kin, If I had the words to tell you we wouldn't be here now, performance at Chi-Wen Gallery, Taipei, 2019
Courtesy the artist and Chi-Wen

Chrysalis marks the major project of 2023 at the Centre d’Art Contemporain Genève. With some sixty artists and over two hundred works, including loans from the Collection de l’Art Brut in Lausanne, it will also feature a special lineup of performance art, screenings, a special music program and concerts. Chrysalis pays homage to the world’s never-ending metamorphosis and all its organic (and inorganic) inhabitants. The exhibition explores the concept of mutability from a wide range of different formal, existential, and political angles.

The gallery is honored to present the first solo show in Los Angeles by Kaari Upson in over a decade, and the first since her death in 2021. Titled by the artist, the exhibition debuts a remarkable series of sculptures and works on canvas created between 2020 and 2021, in which Upson’s stirring characters, symbols and marks materialize through an array of painterly gestures; as well as examples from other recent series and installations that will receive their US premiere. Together, the works demonstrate the artist’s unwavering urge to interpret the psyches and psychoses of our complex contemporary lives.

MMDP is Kaari Upson’s first solo exhibition with the gallery and her first in Germany. Upson’s practice is rooted in the question of contamination, unearthing the space between the self and the other, the indeterminable zone of "both." By investigating the domestic environment, Upson presents the wealth of emotional material that a familiar object or space can contain, exude, and expel; we leak all over our things, and they, in turn, leak their thingness back onto us.

I am Asking What It Is Not
Mousse, artist feature by Kaari Upson, Summer 2019

An Interview with Kaari Upson
Even, interview by Jason Farago, Summer 2016