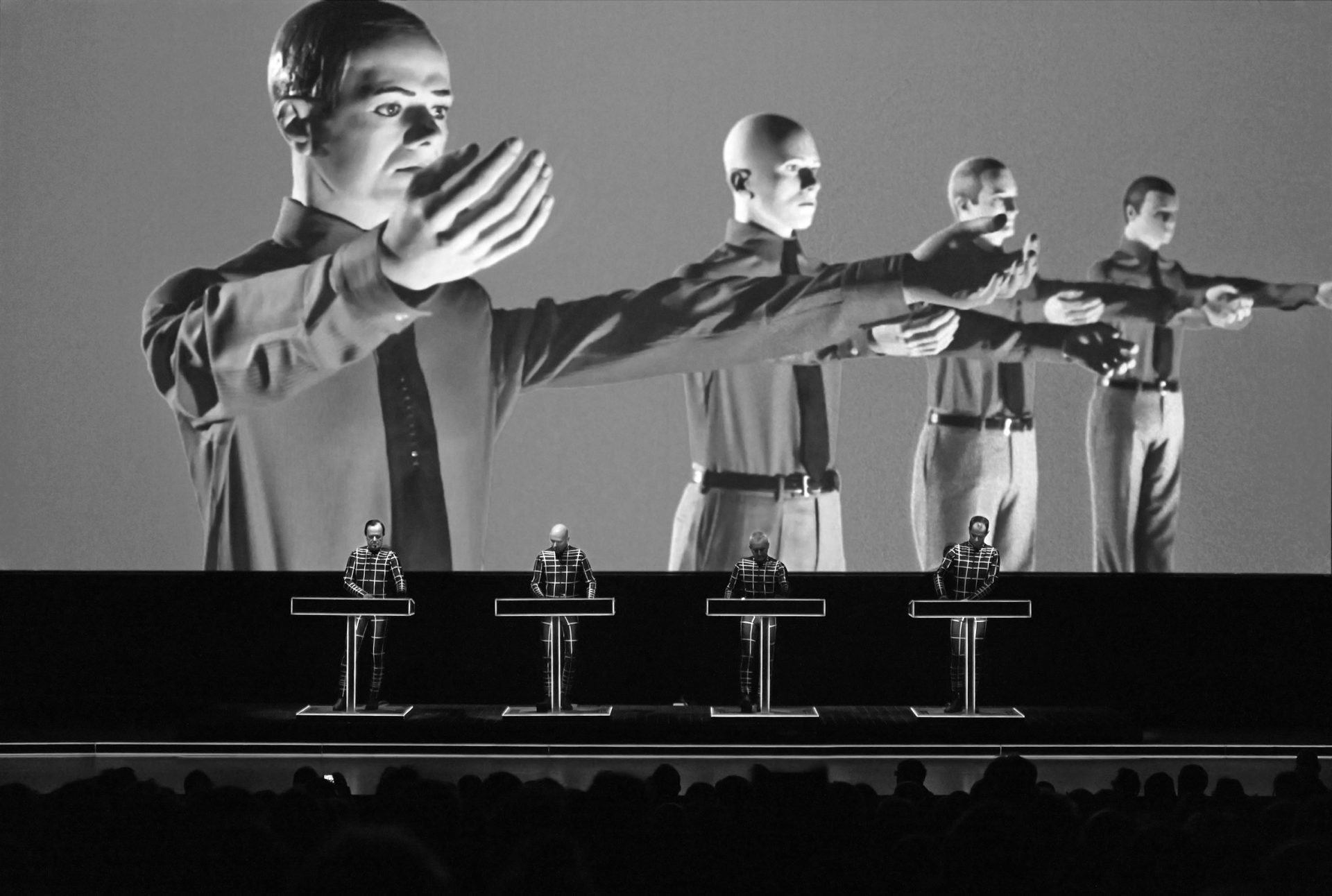 Ralf Hütter and Florian Schneider met at Akademie Remscheid in 1968, and their collaboration began with a performance at the legendar Creamcheese in Düsseldorf. In 1970 they established their Kling Klang Studio and started the Kraftwerk project. A spirit of renewal characterized Düsseldorf in the late sixties, particularly in the realm of contemporary art. Happenings, Fluxus and performance art were part of the artistic life, and a thriving scene emerged around artists such as Joseph Beuys, Gerhard Richter and Sigmar Polke. Kraftwerk created the soundtrack for the Rhineland art world with their performances at the Kunsthalle Düsseldorf, the Kölner Kunstverein, the Ludwig Collection in Aachen, Galerie Hans Mayer in Krefeld and the Rolandseck train station. The name Kraftwerk (German for “power station”) was emblematic of their industrial aesthetic and the electronic energy of the music they created.

Kraftwerk used a wide range of tools at their Kling Klang Studio, including synthesizers, rhythm machines, sequencers, vocoders and programmable synthetic voices. Ralf Hütter directed the videos and covers for their albums, and developed a visual identity for their photo sessions, as well as the concept for the 3-D The Catalogue 12345678 of their albums. The covers and lyrics for the albums Autobahn (1974) and Radio-Activity (1975), as well as for “Trans Europe Express”, “The Model” and other songs were created in collaboration with artist and friend Emil Schult, a student of Beuys.

The breakthrough album Autobahn (1974) was followed by a string of international successes: Radio-Activity (1975), Trans-Europe Express (1977), The Man-Machine (1978), Computer World (1981), Techno Pop (1986), The Mix (1991) and Tour de France (2003). Kraftwerk’s distinctive, futuristic sound opened up a range of new possibilities for music. The everyday poetry of the group’s lyrics—half spoken, half sung by a deadpan Ralf Hütter, and by programmed synthetic voices—reflected emotional states emerging amid a culture of increased mobility, information technology, data collection and globalization. Across five decades Kraftwerk has worked with various artists, musicians and technicians for studio recordings and live concerts. The current line-up consists of Ralf Hütter, Henning Schmitz (b. 1953), Fritz Hilpert (b. 1956) and Falk Grieffenhagen (b. 1969). From the beginning, in 1970, Kraftwerk followed the multimedia idea of the Gesamtkunstwerk— or total work of art—that encompasses music, visuals, texts and performance. Debuting at the 2012 retrospective of their work The Catalogue 12345678 at MoMA, New York was an immersive 3-D video and sound installation of the same name that revisits each of their eight classic Kraftwerk albums, enhancing the original compositions with a dense interweaving of live music and 3-D projections.

Kraftwerk’s artistic philosophy might be described as a kind of “technological existentialism”. The figure of the robot looms particularly large here (Ralf Hütter has repeatedly referred to himself as a “music worker”)—as an allegory for Kraftwerk’s artistic cause and as a model for the artists’ self-dramatization as hybrids of man and machine. Merging music, performance, images and language, Kraftwerk have created a psychosocial experiment that uniquely captures the texture of modernity and life in the present day.

Kraftwerk: The Catalogue 12345678
produced and directed by Ralf Hütter
© Kraftwerk

Inquire about available works by Kraftwerk

The multimedia project Kraftwerk was founded in 1970 by Ralf Hütter and Florian Schneider within the experimental art scene of the late Sixties in Düsseldorf. They set up their legendary electronic Kling Klang Studio where they composed and produced all the groundbreaking Kraftwerk albums. Numerous live performances took place during that time in museums and galleries of the surrounding Rhineland.