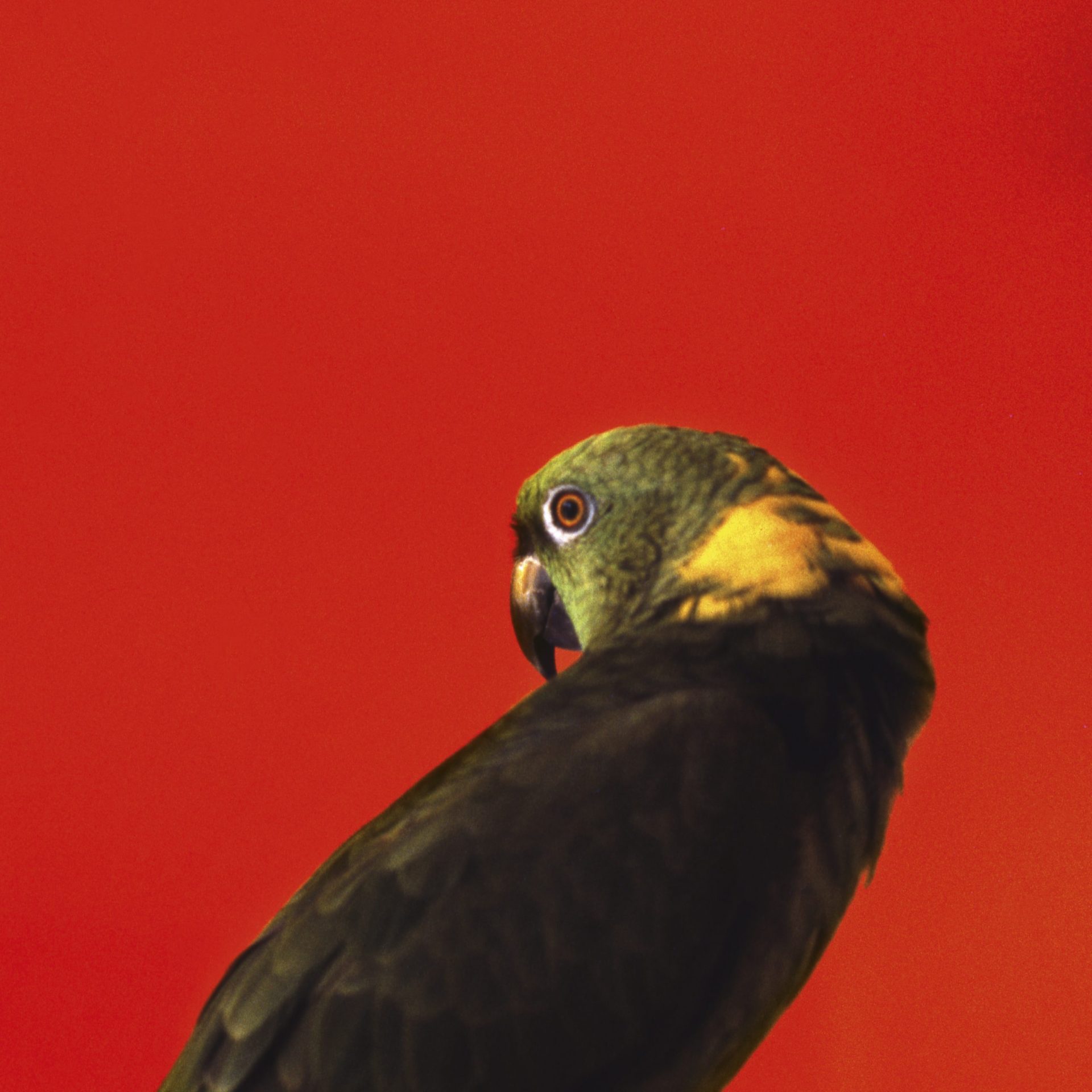 Louise Lawler (*1947) is a key figure of the Pictures Generation of appropriation art. At the heart of her body of work are photographs of other artists’ works as displayed in museums, storage spaces, auction houses, and collectors’ homes. She uses photography as a conceptual tool and way of directing attention to things that are tacit and unspoken—the constraints, rules, and economies of the loose system that governs the art world. The Brooklyn-based artist has been associated with the gallery since 1987.

Lawler’s critical take on the art world was already apparent in the conceptual and performative interventions of her early work. One example is her well-known Birdcalls (1972–1981), for which the artist sounded out the names of regularly exhibited contemporary artists including Julian Schnabel, Gerhard Richter, and Donald Judd, all of whom were men. With calculated wit, the calls that Lawler herself performed pointed to the blatant patriarchal hegemony of the art world.

In the late 1970s, Lawler incorporated photography into her art practice and shifted her focus to the vagaries of the aesthetic experience of existing works of art. She adopted certain principles of conceptual art—involving the viewer as a participant in the work, for example, or refusing to produce further objects—and refined and expanded on them. Lawler’s highly complex photographs have repeatedly managed to examine the conditions of the exhibition, reception, and circulation of artworks, thereby analyzing their fate as things, their lives as objects. Her works give insight into how the meaning of the photographed works changes with their respective environments, forms of presentation and exhibition history. They make visible their transformation into objects of financial investment and highlight how the public interest inherent to any work of art clashes with its entry into mostly private art collections.

It isn’t just in her photographic work that Lawler explores art’s economic regime down to its smallest, seemingly banal details. She also continues to produce ephemera including matchbooks, gift certificates, postcards, posters, and souvenirs such as drinking glasses or paperweights. Invoking her signature, subtle humor, she underscores how the art apparatus relies on a loose network of advertising materials and other articles that help determine how an artwork is recognized and valued.

The artist never leaves any doubt that the only reason she is able to analyze art’s contradictory system is because she herself participates in it to a certain extent. It is in this spirit that she also questions the iconic quality of some of her own works by continuously reframing and restaging them. In an act of ironic self-emptying, she transforms some of her best-known photographs into what she calls “tracings”—black-and-white coloring book templates that are affixed to the wall as wallpaper or in some cases directly appear in a kind of “coloring book.” Her so-called “adjusted to fit” pieces consist of digitally altered images of a number of her photographs that have been stretched or altered to match the proportions of the exhibition walls, and thus appear distorted. Other more recent works are characterized by a socio-political dimension, a timely urgency. Pieces including Drop Bush not Bombs (2001–03), Where Is the Nearest Camera? (2007), or No Drones (2010–11) take a firm, critical stance on American war and surveillance policies without leaving the terrain of art.

Over the course of her career, Lawler has created an impressive archive that documents the rapid transformation of the art world and its turn towards neoliberal economies of attention and speculative interests. In contrast to works within the traditional movement of institutional critique, the artist’s oeuvre refrains from passing judgment and noticeably leaves room for ambiguities. What’s more, by re-staging them in a new exhibition context, she often restores some of the original aura and aesthetic autonomy to the artworks she portrays. Through her probing examination of context and value in contemporary art, Lawler has expanded conventional criticism of the institutions and practices of the art world.

Formica (adjusted to fit, distorted for the times, slippery slope 2), 2011/2012/2015/2017
Adhesive wall material
Dimensions variable to match proportions of a given wall at any scale determined by exhibitor

Formica (adjusted to fit, distorted for the times, slippery slope 2), 2011/2012/2015/2017
Adhesive wall material
Dimensions variable to match proportions of a given wall at any scale determined by exhibitor

Your message has been sent.
Current and Upcoming

“Somewhere Downtown” is an evocation and celebration of downtown New York City during the 1980s. Set amid the ruin and neglect of New York at its economic nadir, the exhibition reveals a creative zenith of expression and experimentation. Dozens of artists who once existed among overlapping communities of shared dreams and collective obscurity now stand among the most important artists of the late twentieth century.

Five Ways In: Themes from the Collection
Group Exhibition
The Walker Art Center, Minneapolis
Through November 19, 2023

The Walker’s newest collection exhibition is organized by five familiar themes: portraiture, the interior scene, landscape, still life, and abstraction. Each of these areas features a diverse range of artists whose approaches to their subjects are often unconventional, innovative, and even surprising.
With more than 100 works—painting, sculpture, drawing, photography, and video installations—the exhibition Five Ways In: Themes from the Collection invites us to become reacquainted with favorites from the collection and discover new pieces by artists who are reinventing genres we thought we knew.

Louise Lawler
LIGHTS OFF, AFTER HOURS, IN THE DARK
September 17–October 30, 2021
Berlin

LIGHTS OFF, AFTER HOURS, IN THE DARK features a new series of works by Louise Lawler in which she has photographed the Judd exhibition at the Museum of Modern Art in New York. These photographs – taken over two evenings with the lights off, after hours, in the dark – offer an alternate view of an artwork’s existence and the abstract potential of an image itself.

Over the last 30 years, Louise Lawler has been making photographs that depict views of objects and artworks in their everyday working environments, shifting the emphasis from the subject itself to vantage points, framing devices and the modes of distribution that affect the reception of an artwork. For No Drones, Lawler will exhibit a group of ‘tracings’, a series that she developed for her exhibition at the Museum Ludwig, Cologne, in 2013.

Over the last 30 years, Louise Lawler has been making photographs that depict views of objects and artworks in their everyday working environments, shifting the emphasis from the subject itself to vantage points, framing devices and the modes of distribution that affect the reception of an artwork. For No Drones, Lawler will exhibit a group of ‘tracings’, a series that she developed for her exhibition at the Ludwig Museum, Cologne, in 2013.

No Drones presents new work by American artist Louise Lawler in her first UK solo show in four years. For the artist’s third exhibition at the London gallery, Lawler reveals a series of photographs presented as mounted prints and vinyl murals that have been stretched and adjusted to fit the gallery walls.

Taking Place is Louise Lawler's first solo exhibition in Sprüth Magers' new gallery space in Berlin after having shown her work many times since 1987. The photographs shown in the exhibition were taken in auction houses and homes, most notably Yves Saint Laurent‘s apartment in Paris.

Renowned since the 1980s for her photographs taken in private collections, museums and auction houses, Louise Lawler continues to question the ideas of authorship and the notion of identity that we invest in works of art. Throughout her career Lawler has often focused on the environments where artworks exist after leaving the artist’s studio. As the place of creation, the artist’s studio was rarely of interest to Lawler. It was rather the life of the work afterwards that raised important questions for her: in which surroundings is art presented to us and how does our perception of it depend on these? What are the mechanisms of the institutions and the art market, which determine the various locations where we can find art?

Louise Lawler: Lights Off, After Hours, In The Dark
ArtReview, article by Martin Herbert, January/February 2022

Artist Project: Louise Lawler’s Tracings for You
MoMA.org, with a text by Roxana Marcoci, March 25, 2020