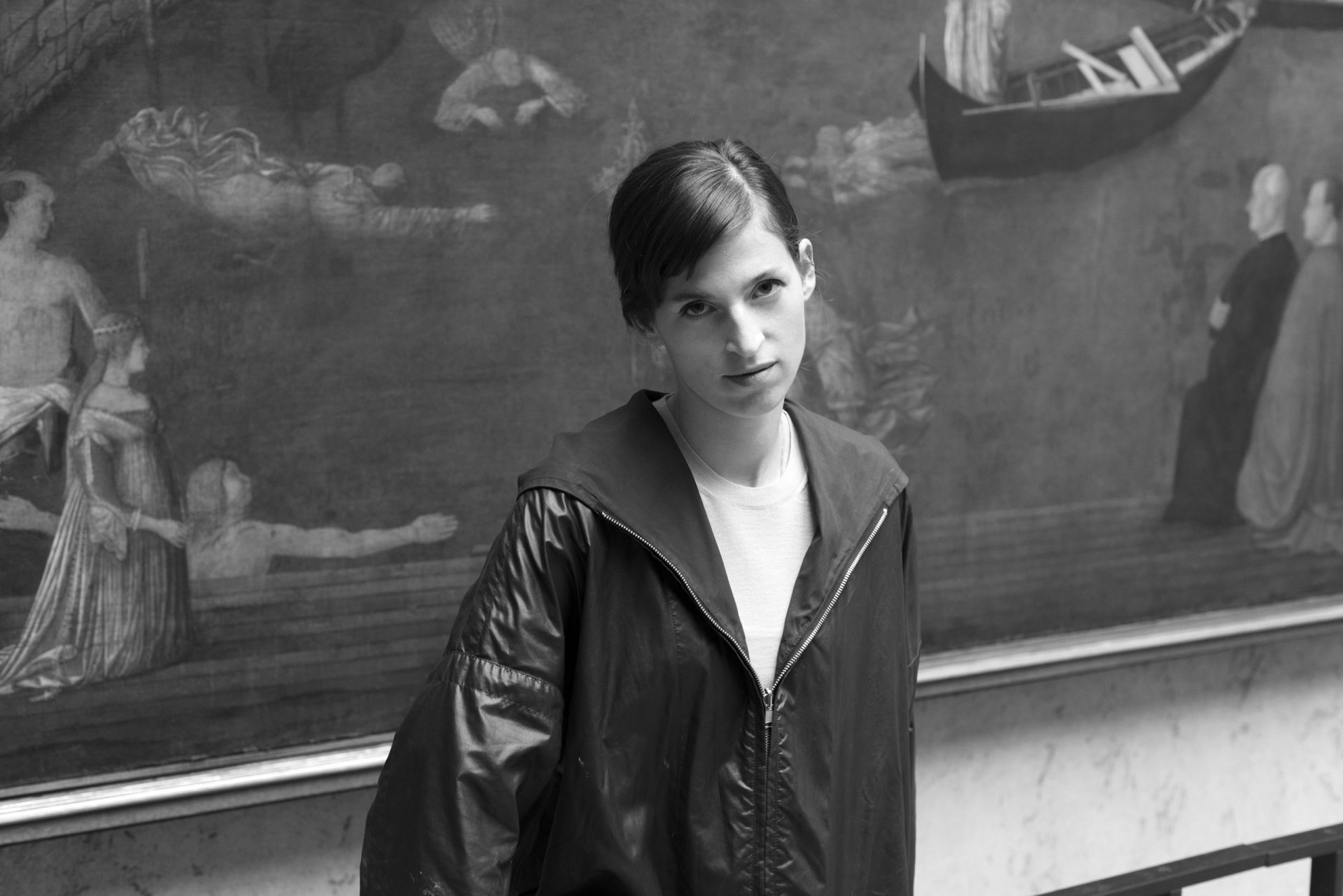 Pamela Rosenkranz (*1979) rose to prominence with a conceptual practice that encompasses sculpture, video, installation and painting. Her work questions the subjective element in the apprehension of an artwork, shifting the viewer’s focus toward the material, biochemical and neurological determinants of human behavior. Dubious of a worldview that places human beings at the center of the natural and material universe, the Zurich-based artist has also collaborated with thinkers from the broad philosophical movement known as speculative realism.

Much of Rosenkranz’s critique of anthropocentrism involves an exploration of consumerist attempts to “domesticate” nature. Firm Being (2009–present), for example, probes the marketing strategies employed by mineral water producers: Works in the series consist of Evian, Fiji, and SmartWater-brand PET bottles filled with silicone tinted to match  “Caucasian” skin shades. The material, also known by the brand name Dragon Skin, is used among other things in the manufacture of prostheses and make-up for films. The sculptures satirize the bottlers’ esoteric advertising promises of self-optimization and internal body cleansing by interpreting them literally and presenting perfectly smooth, synthetic skin as the actual contents of the bottle. On another level, their materiality points to the role of plastic bottles in the littering and contamination of the earth’s water cycle: Even the planet’s ecological balance is sacrificed on the altar of purity.

The silicone rubber in Firm Being is also employed in installations including Our Product (2015) and Skin Pool (Oromom) (2019), where it fills entire swimming pools. Its fleshy hue appears again in acrylic pigment applied to large-format paintings—works for which the artist uses such metaphorically-charged materials as emergency blankets or spandex as a painting surface and her own body as a painting tool. Transformed into its complementary color—a specific green that Rosenkranz associates with the color of rainforest flora and chlorocruorin, the oxygen-binding component in the blood of some annelids—it appears in a number of light installations and painted works as well.

A key focus of the artist’s practice is her investigation of objective evolutionary and biological aspects, neurological reactions and psychotropic phenomena that have a far-reaching impact on the aesthetic experience but are traditionally considered part of the “subjective” aspects of artistic creation. A potent example can be seen in Sexual Power (Viagra Paintings) (2014), for which the artist ingested the erectile dysfunction drug and painted large-scale aluminum panels in a vigorous—or virile—style reminiscent of Abstract Expressionism. Works including Infection (2017) incorporate the synthetic feline pheromone civetone to explore the means by which toxoplasmosis (a disease caused by a protozoan parasite and transmitted by cats, among other animals) can imperceptibly alter human behavior and perception.

A number of Rosenkranz’s best-known works deal with the color blue and its use by French artist Yves Klein, among them the video installation The Death of Yves Klein (2011), paintings in the series My Yves Klein Blue (Approaching) (2015), the sculptural Blue Runs (2016) and light installations including Alien Culture (2017). Common to all of these works is a reflection on the early evolutionary and biological formation of the eye’s receptors for blue. It is the millennia-old genetic codes of these receptors that account for the intense aesthetic, quasi-religious experience of color, not the artist subject. Pamela Rosenkranz dissolves habitual cultural coordinates, detaching the viewer from a traditional view of the world that emphasizes human self-referentiality.

Inquire
Pamela Rosenkranz
No One, 2016

Inquire
Pamela Rosenkranz
No One, 2016

At her first solo exhibition at Sprüth Magers, London, Pamela Rosenkranz presents recent sensory and atmospherical works in which color, light, scent and sound play an essential role. In her oeuvre, she questions the certainties of authentic human experience, perceiving people as permeable membranes at the interface between nature and artificiality. Drawing on themes that we encounter in our everyday, visually overcharged lives, Rosenkranz creates links that allow us to make unexpected connections between objects and ideas, while at the same time unsettling us.

She Has No Mouth is Pamela Rosenkranz’s inaugural solo exhibition at Sprüth Magers, Berlin, for which she has developed a new series of paintings and an installation with light, scent, and sound. The works continue her longstanding engagement with the biological and evolutionary underpinnings of art, her investigation of materiality and immateriality, pigments and pheromones, microbes, colors, and scents.