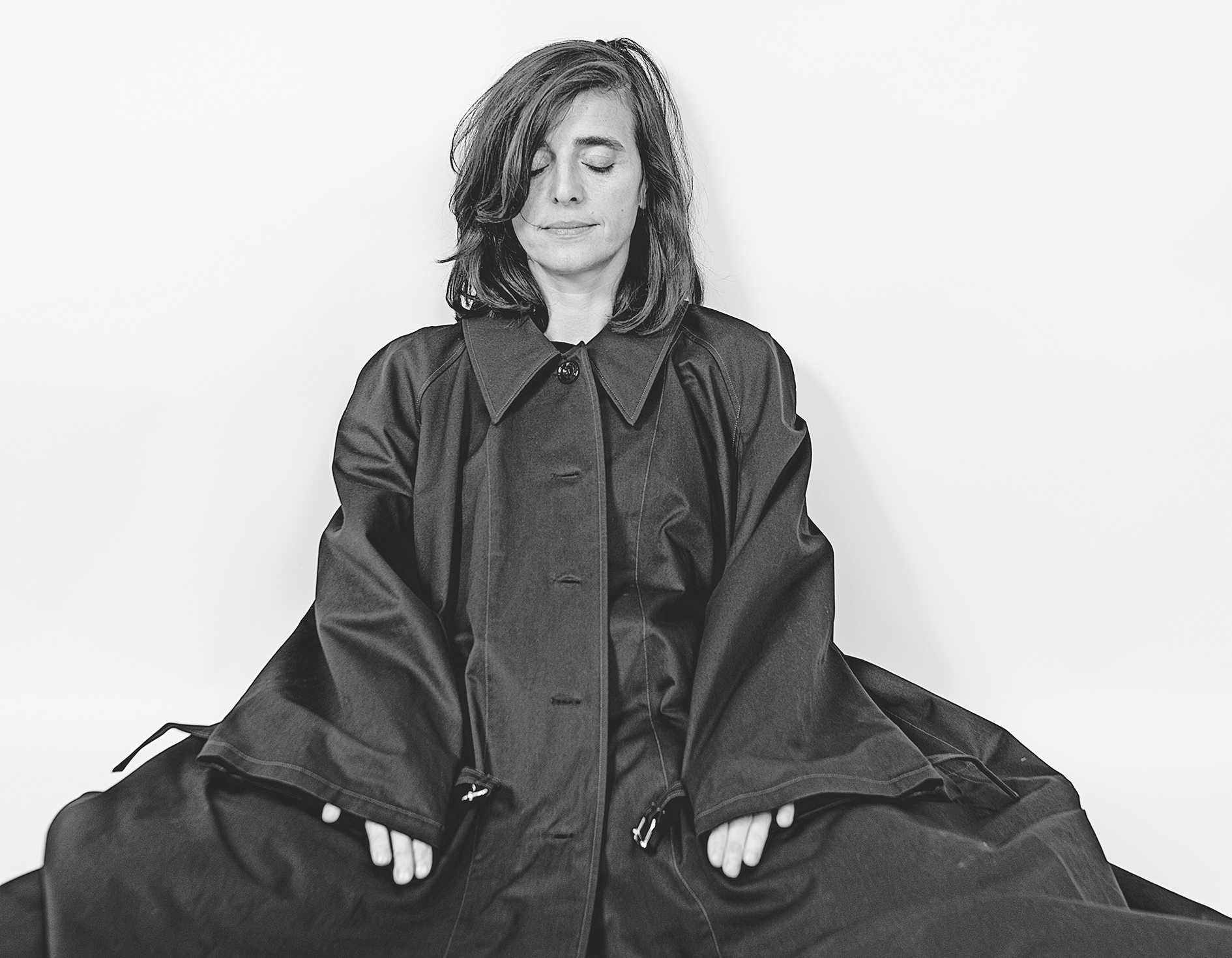 Thea Djordjadze (*1971) creates sculptures and installations of singular, idiosyncratic poetry. Her works are suffused with multiple art-historical references, while at the same time they respond to the particular conditions of the exhibition setting. The fragile, process-driven character of the Berlin-based, Georgian artist’s practice dissolves the notion of the artwork as a fixed entity. Her sculptures and installations offer viewers a spatial, physical and psychological experience, casting an unanticipated light on particular environments.

Djordjadze’s installations combine constructed and found elements. The materials she uses are drawn mostly from everyday objects, ranging from rigid wood and metal constructions to amorphous papier-mâché, textile and foam objects. Painted glass panels appear as frequently in her works as her metal sculptures, which resemble three-dimensional drawings of space. Her distinctive plaster sculpture paintings are another important body of work—plaster-filled mahogany frames with sketchily painted surfaces. While many of Djordjadze’s objects have the look of furniture, they in fact are non-functional, hybrid objects, somewhere between art and apparent utility. Viewers are confronted with carpets, folding screens, and shelves, but also architectural elements such as functionless canopies, self-built showcases or exhibition displays for showing works by other artists. Her objects and installations investigate the idiosyncrasies of particular exhibition conditions.

The artist exposes the objects she uses to a process of constant change and exploration, of looking and understanding, feeling-out, selection and rejection. Djordjadze’s exhibitions only keep things in place for a limited period of time, suspending them in a transitory relationship to the gallery or space and its architecture. This open-ended method creates a state of uncertainty that gives her work an incomparable freedom, as well as a persistent air of uncertainty.

The resulting installations are multi-layered spaces that contain numerous echoes and memories of other places, bringing together a multitude of temporal planes and layers of perception. Djordjadze’s aesthetic vocabulary oscillates nimbly between minimalism, architectural history and conceptual art. It draws on aspects of art by the Georgian avant-garde of the 1920s and discovers an experimental space somewhere between Le Corbusier and Donald Judd. The art-historical echoes are never explicit, however. Instead, viewers might get the impression that the diaphanous memories of other spaces, and other eras, are overlapping with the immediate experience of the exhibition space.

Djordjadze’s installations radically question the notion of the “white cube” as a supposedly value-neutral exhibition space and give viewers the feeling of having entered the artwork itself. The works are ambiguous interiors that do not operate according to the usual rules and laws of interiors, depending instead on a subtle dissection of how we perceive space. Djordjadze manages to cross nothing less than a liminal threshold in viewers’ spatial perception. Her installations sometimes resemble sketches for an archaeology of inner landscapes: sketches of memories, desires and feelings made spatial.

Thea Djordjadze: one is so public, and the other, so private
Kunst Museum Winterthur, September 7–November 17, 2019

More views
Inquire
Thea Djordjadze
one is so public, and the other, so private.
Installation view, Kunstmuseum Winterthur, Winterthur, September 7–November 17, 2019

Thea Djordjadze
Power of no excuses, 2019
one is so public, and the other, so private, installation view, Kunst Museum Winterthur, 2019
Photo: Reto Kaufmann

Thea Djordjadze
take me my lie away, 2019

More views
Inquire
Thea Djordjadze
take me my lie away, 2019

Thea Djordjadze
take me my lie away, 2019

Inquire
Thea Djordjadze
She didn't have friends, children, sex, religion, marriage, success, a salary or a fear of death. She worked, 2014

More views
Inquire
Thea Djordjadze
She didn't have friends, children, sex, religion, marriage, success, a salary or a fear of death. She worked

She didn't have friends, children, sex, religion, marriage, success, a salary or a fear of death. She worked, 2014 (detail)

Thea Djordjadze
The Ceiling of a Courtyard, 2019

More views
Inquire
Thea Djordjadze
The Ceiling of a Courtyard, 2019

The Ceiling of a Courtyard, 2019
Installation view, one is so public, and the other, so private, Kunst Museum Winterthur, 2019

Thea Djordjadze
The Ceiling of a Courtyard, 2019

Power of no excuses, 2019
one is so public, and the other, so private, installation view, Kunst Museum Winterthur, 2019
Photo: Reto Kaufmann

Inquire
Thea Djordjadze
one is so public, and the other, so private.
Installation view, Kunstmuseum Winterthur, Winterthur, September 7–November 17, 2019

Inquire
Thea Djordjadze
She didn't have friends, children, sex, religion, marriage, success, a salary or a fear of death. She worked, 2014

She didn't have friends, children, sex, religion, marriage, success, a salary or a fear of death. She worked, 2014 (detail)

Inquire
Thea Djordjadze
She didn't have friends, children, sex, religion, marriage, success, a salary or a fear of death. She worked

The Ceiling of a Courtyard, 2019
Installation view, one is so public, and the other, so private, Kunst Museum Winterthur, 2019

Your message has been sent.
Current and Upcoming
one is so public, and the other, so private., installation view (detail), Kunst Museum Winterthur, September 7–November 17, 2019
Photo: Reto Kaufmann

Influenced in equal measure by historical artefacts and concepts of modern art and architecture, Thea Djordjadze’s sculptural works are characterised by formal ruptures and an idiosyncratic material aesthetic. By combining materials such as plaster, metal, rubber, textiles, wood or papier-mâché, Djordjadze creates fragmentary spatial settings in which she reformulates the classic display – vitrine, plinth, framing and pedestal – as a recurrent theme in her work.

Set in the historic F Hall—a former printing facility and women’s prison—this exhibition of five artists circles around the expansion of limits and constraints, working through how they could serve as an artistic framework rather than as objects of antagonism. In the metaphorical shape of a body, the exhibition is alive from the first hour to the last. Experimenting with concepts of “sculpture”, the artworks are ways of exploring our multifaceted facts and ecologies, spanning lived-through stories and realised imaginations.

Thea Djordjadze
if I were an early person
April 9–June 1, 2019
Los Angeles

The work of Thea Djordjadze concerns itself, first and foremost, with the poetics and particularities of space. She combines a variety of artistic, industrial, and unconventional materials to produce works full of contrasts and complexity, which she puts into conversation with the architecture and atmosphere of her exhibition spaces through intimate, considered arrangements. Each of her projects is thus ephemeral in nature, open to future reconfiguration.

Un soir, j'ai assis la beauté sur mes genoux. And I found her bitter and I hurt her is a joint exhibition by the long-time collaborators Rosemarie Trockel and Thea Djordjadze. It is the first time that the two installations from 2007 and 2008 are on view in Berlin. The works have an allegorical nature that explores a number of themes pertinent to contemporary art. Issues around the boundaries of media, and the artwork as a fixed concept are called into question, as well as the exhibition space as a representational frame.

Interiors are sites of existential symbolism. They are the place where a child first clashes with the world – a location of real and symbolic protection for the ego. They collect the sediments of cultural history and of our own lives, marking an interspace between us and the world. Few contemporary artists have so cannily, idiosyncratically explored the existential experience of the interior as Thea Djordjadze, whose expansive sculptural installations combine constructed and found elements into intuitive arrangements.

For her multipartite sculptural ensembles, Djordjadze uses everyday materials such as foam, steel, fabric, glass and plaster along with found objects which refer to the classical materials of sculpture but also the traditions of arts and crafts. The artist’s sculptures themselves are situated between form and anti-form, a combination of stable structures and fragile, gestural renderings typically exhibited together in a carefully choreographed setting. The installations, incomplete and fragmentary in character, oscillate between open spatial designs and dense performative gestures, emphasizing the contrasts between mental and actual interior spaces, between intimacy and public presence.

Standing at the center of ‘Explain away, ე.ი.' is a wooden construction, a space which may be viewed and entered, a house or the fragment of a house. A site where the ordered delineations between living and working, between private and public have been canceled. Arrangements of things both objective and non-objective, which receive every person with a relaxed easiness and equanimity, regardless of whether he attempts to decipher them or not. Delicate, amorphous forms made of clay, plaster or papier-mâché enter into contact with sketchy paintings and dysfunctional constructions which bear witness to a profound investigation of modernism.

The installations, objects and drawings of Thea Djordjadze echo the atmosphere of various art-historical and cultural-historical contexts. After completing her art studies in Tbilisi and Amsterdam, and during her time at the Kunstakademie Düsseldorf (studying under Dieter Krieg, then Rosemarie Trockel), the artist started work on a series of performances, which define a new framework for communicative exchange and experiences.

Thea Djordjadze. To be in an upright position on the feet (studio visit) Secession, Vienna
Art Review, article by Kimberly Bradley, December 2016