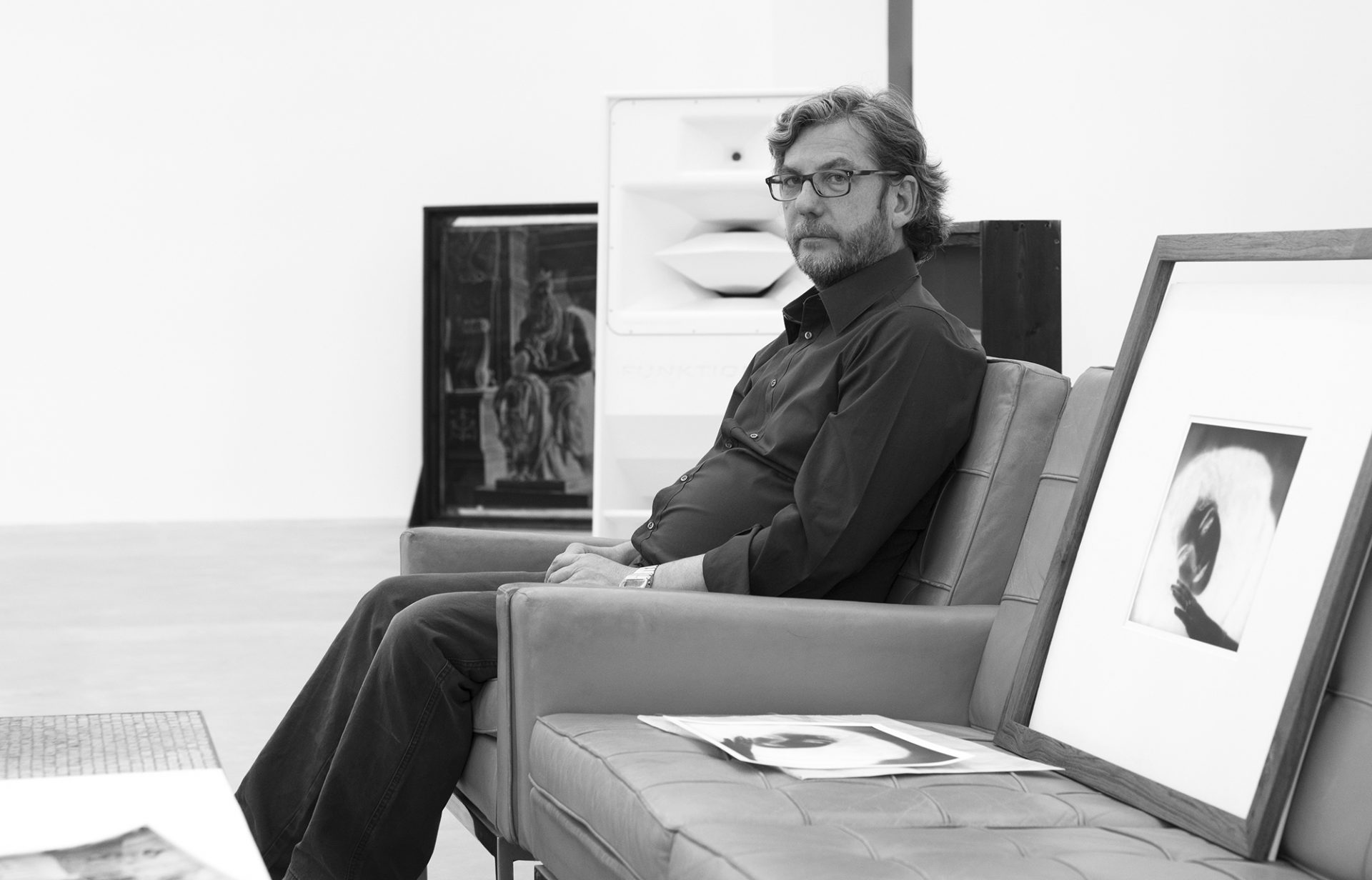 At the heart of Thomas Ruff’s (*1958) complex oeuvre is a pioneering conceptual expansion of what constitutes photography. Ruff’s prodigious output varies widely, from analogue portraits to manipulated images appropriated from the internet, digitally-altered archival images and digital photograms. Works by the Dusseldorf-based artist consistently explore how historical and media-driven changes in photography affect our understanding of the relationship between image and reality.

Ruff created his first photo series while still a student at the Kunstakademie Düsseldorf, where he studied under Bernd and Hilla Becher. Interieurs (1979–83) captures details of homes belonging to the photographer’s relatives and acquaintances. These are sober, unsentimental images, and yet they have an almost uncanny poignancy as well. His second series, Portraits (1981–87)—a group of large-format photographs showing the expressionless faces of his friends—was a crucial breakthrough for the artist, securing his position on the contemporary art landscape. Framed like a passport photo or mug shot against a plain background, the unusually oversized images take the genre of portrait photography to a subversive extreme. Though the matter-of-fact seriality of these works echoes the Bechers’ “typologies” of industrial relics, their superhuman scale unsettles the viewer. This influential series reads like a portrait of the artist’s generation: both silent and extremely telling at the same time.

Ruff’s Sterne (Stars, 1989–92) series was his first to integrate found photographic material. The large-format abstractions are based on telescopic photographs of the night sky, the Milky Way, stars and gas nebulae taken at the European Southern Observatory. The artist employs a similar strategy for his cassini (2008–present) and ma.r.s. (2010–present) series, for which he uses photos of the planets Saturn and Mars taken by NASA space probes. Another series titled nudes (1999–2012) show the artist turning his attention to the genre of nude photography: Ruff enlarged low-resolution pornographic photos from the Internet and manipulated them with a pixel-shifting process that gives them a blurry, painterly quality. A similar strategy comes to bear in jpegs (2004–08), a series that foregrounds the eponymous digital image compression format. Here the artist made the found images smaller before expanding them to a large, almost monumental scale, so that their usually invisible pixel building blocks reach a size of several centimeters apiece. For press++ (2015–present), the artist collected historical press photographs from archives of American newspapers and magazines and scanned the front and back of each. Works in the series combine both sides of a picture in a way that renders texts, notations and traces of use by photo editors visible. The appropriation strategies Ruff employs in this and other series are never an end in themselves. They are rather used in the service of research—to illuminate the triumph of digital visual data in everyday life, for example, to broach the issue of authorship in the case of machine-made photographs or question the associative space of our collective voyeurism.

Another facet of the artist’s work is his investigation of photographic imaging techniques. Ruff’s Negatives series (2014–present), for example, involves a complex process used to transform found historical photographs into photo negatives. The characteristic sepia tint of early photography is converted to its opposite, assuming ghostly cyan tones that evoke the printing process of cyanotype. Also paradigmatic is his Photograms series (2012–present). In a virtual darkroom, Ruff digitally reinvents the most analogue of all photographic techniques: a method that involves placing objects directly on light-sensitive paper and then exposing them to light to create a picture.

Thomas Ruff’s work negotiates the historical, aesthetic and psychosocial life of photography, creating new visual experiences in the process. Photography, for the artist, is a consciousness-altering technology. The images we produce with it are like symptoms; they reveal more about us than we could possibly imagine.

Monika Sprüth and Philomene Magers are pleased to announce d.o.pe., Thomas Ruff’s solo exhibition of new works at the Berlin gallery. With the d.o.pe. series, Thomas Ruff once again immerses into the world of mathematics and additionally evokes his personal experience with psychedelic art of the 1960s and 1970s. Featuring fractal patterns that the artist generates with a specialized software program and prints on industrial carpets, the works illustrate Ruff’s constant striving to visually express the beauty of mathematics while representing his interest in the possibility of generating images that appear natural but are produced artificially. The connection that fractals are both natural and artificial structures reinforced the artist in his ongoing investigation of human perception. By further recalling the highly detailed and exuberant Northern Renaissance style of artists such as Hieronymus Bosch and Matthias Grünewald, Ruff interprets d.o.pe. as a reference to the fact that there are no limits to the artistic imagination.

As part of the exhibition parcours Mies In Mind, initiated by INDEX Berlin and taking place on the occasion of the reopening of the Neue Nationalgalerie, Sprüth Magers is showcasing works by John Bock, Thomas Demand, Thea Djordjadze, Jenny Holzer, Reinhard Mucha, Otto Piene, Thomas Ruff and Thomas Scheibitz in a group exhibition that pays tribute to the architect Ludwig Mies van der Rohe and his famous building.

In a multi-faceted practice that examines the ever-changing possibilities of photography, Ruff’s investigations into visual and cultural phenomena are indebted to an interest in how technology makes us see. This is evident in his vast array of subjects and methods, from portraiture and astronomical documentation to photograms and digital abstractions created by algorithms.

I Don’t Really Care About the Distinction Between Black and White and Colour Anymore
Modern Matter, interview by Michele Robecchi, Autumn/Winter, 2017

Thomas Ruff (*1958, Zell am Harmersbach) lives and works in Dusseldorf. Selected solo exhibitions include the K20, Kunstsammlung Nordrhein-Westfalen (2020–21), the National Portrait Gallery; Whitechapel Gallery, London (2017), the National Museum of Modern Art, Tokyo (2016), S.M.A.K., Ghent, which travelled to the Kunsthalle Düsseldorf (both 2014) and the Haus der Kunst, Munich (2012). In 2017 Thomas Ruff’s exhibition New Works was exhibited at the Gallery Sprüth Magers, Berlin. Recently his work was on view at group shows at the Guggenheim Museum, Bilbao (2021), Kunsthaus Zürich (2020), the Museum of Modern Art, New York (2019), the Tate Modern, London (2018) and the Victoria and Albert Museum, London (2018). In 2021, Thomas Ruff presented his first major solo exhibition in South East Asia at the National Taiwan Museum of Fine Arts, Taichung.