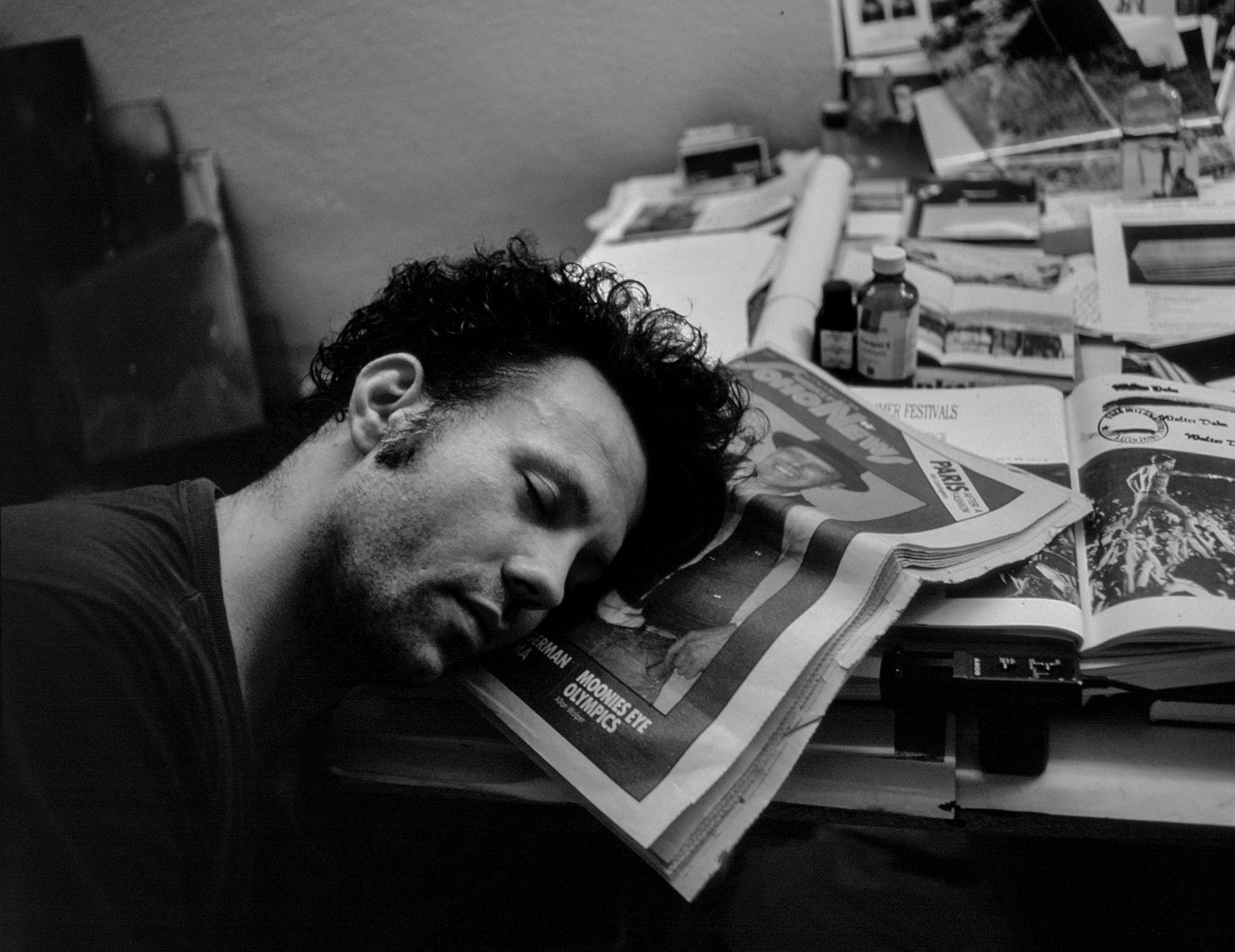 Walter Dahn (*1954) was an important influence on a generation of artists often referred to as the Neue Wilde, or New Fauves. A co-founder of the short-lived but significant Mülheimer Freiheit group and a pioneer of “Bad Painting”, he developed a way of painting that questioned the point of the medium. The Cologne-based artist has continued his work in other media since the late 1980s, screen prints in particular. His works, which have been described as a “synthesizing cultural anthropology,” insistently analyze the visual ideologies of art and everyday culture.

What unites Dahn’s large- and small-scale paintings from the early 1980s is their historically singular engagement with the medium of painting. Each of these works looks rapidly painted, even slapdash in their execution. Acrylic and emulsion paints ooze and drip, areas of color appear impulsively composed, and figurative elements are painted carelessly or presented as hastily sketched outlines. The subject matter is equally unkempt: skulls morph into peace signs or stare hungrily at a drink, bizarre body parts hold cigarettes, or a Beuysian hat might perch on a pole arrayed against an abyss. These paintings are also fueled by jokes and erratic slogans. They consider the figurative, but inevitably land in the realm of the grotesque and semi-obscene. They visually invoke emblems and attitudes of the punk movement while simultaneously poking fun at them. Dahn’s paintings seem opposed to everything. Paintings in spite of themselves, they bear witness to an extraordinary artistic instinct that is most effective when turned against itself.

Paradoxically, Dahn’s work has a painterly flair, and testify to an unwavering struggle with the purpose of painting in a late-capitalist art system more inclined to use artworks as objects of speculation and decoration. They constantly demand to know what one should paint, and why anyone should bother painting at all. Dahn’s early works succeeded in laying a cornerstone of the “Bad Painting” movement, exuberantly opening an art-historical door that few thought existed.

Inevitable as it seemed, Dahn’s abandonment of painting came on gradually. His screen prints—increasingly his main outlet along with photography, drawing and film—are not editions, the potentially limitless reproduction common to the medium, but are one-off, original pictures. In some respects, they are a logical continuation of his painting, albeit with non-painterly means.

The found images, lettering and slogans on which these works are based often strike the viewer as vaguely familiar. A testament to Dahn’s wide-ranging interests, they also point again and again to the major role that music has played in his life. Visual elements, including an early ethnological photograph of aboriginal Australians, or a picture of a nude Naga cult follower riding a horse, mingle with such distinctive slogans as “Punk is the sound of my soul” or Oscar Wilde’s aphorism, “We are all in the gutter, but some of us are looking at the stars”. Symbols from the artwork of famous albums by The Smiths, the Sex Pistols, or The National round off his visual lexicon. Like Dahn’s paintings, these works unleash a vast array of associative chains, posing existential, historical, personal and intellectual questions, permeating our consciousness. Rather than explore the trappings of artistic ideologies, they investigate the visual ideologies of everyday life.

The Audioarchiv Kunst is gradually emerging and for the first time is building up an extensive and polyphonic sound archive on the spirit of the times and developments in art in the Rhineland since the 1960s. Nowhere else in Germany at that time were the important art movements such as Pop Art, Minimal and Conceptual Art from the USA taken up and able to develop into new “Rhineland” positions, such as Fluxus. Sections, such as the new electronic music, also entered into new alliances with art during this period.

A contemporary witness of this time is Walter Dahn.

The majority of artistic careers are stories of ruptures and interruptions. Frequently it is only in hindsight that continuity becomes visible. Walter Dahn 1980 – 83 / 2014: 2 Spaces, the new exhibition at Sprüth Magers Berlin, focuses on works from two periods by the influential Cologne artist Walter Dahn, which may initially appear disparate.

Thank You For The Music addresses the recent history of music. The exhibition examines music and pop culture, their various market mechanisms, and the liberation from the traditional copyright restrictions as a ubiquitous source of artistic inspiration – one that has become a global phenomenon and a permanent aspect of everyday experience. Drawing on a selection of more then 30 contributions by contemporary international artists, filmmakers, and musicians, the project attempts to position music and culture within a larger social context.

The exhibition Thank You For The Music examines music and pop culture, their various market mechanisms and the liberation from traditional copyright restrictions as a ubiquitous source of artistic inspiration — one that has become a global phenomenon and a permanent aspect of everyday experience. Drawing on a selection of contributions by more than 30 international artists, filmmakers and musicians, the show attempts to position intersections between visual arts, music culture and music history within a larger social context.

A Bootful of Brains: The Soulful Image of Walter Dahn
Artscribe, article by Wilfried Dickhoff, April/May 1986