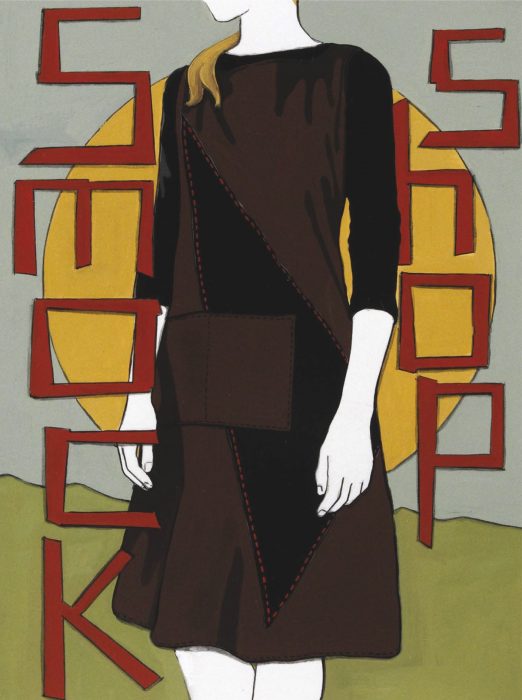 Sprüth Magers London is delighted to host the final installation of Andrea Zittel’s travelling enterprise ‘Smockshop’ during London Fashion Week this September (www.smockshop.org). Nestled at the end of the famed fashion thoroughfare Dover Street, the gallery will become a collective workshop of artisans or ‘smockers’ who will produce a series of garments immediately available for purchase upon their completion. Yet despite taking the form of a clothing atelier or shop, ‘Smockshop London’ is not a straightforward contribution to the business of making and selling clothes that dominates London throughout Fashion Week. Rather, this dissident intervention diverges from the fashion industry’s organizing principles of mass manufacture, profit maximization, and illusory individuality in its exploration of the collaborative and social possibilities contained within the making and wearing of clothes.

The Smockshop is a continuation of Andrea Zittel’s long-standing aesthetic investigation into the daily routines and functional experiences of everyday life. Founded in Los Angeles in 2007, this artistic and economic ‘pop up’ experiment appeared in galleries, stores, and non-profit venues across North American before making its European debut at Sprüth Magers Berlin in February of 2009. A profit-making enterprise with social awareness, the Smockshop generates income for non-commercial artists who are not yet self-sustaining. To date, almost 300 garments have been made by the collective. While every smock conforms to the same basic shape and form of Zittel’s double wrap-around design, each smocker is given license to interpret and rework this design according to individual interests and skills. The resulting array of colours, textures, and patterns form an aesthetically diverse yet functionally uniform body of work, illustrating Zittel’s belief that ‘rules make us more creative’.

Suggesting an alternative to the prevailing discourse of the contemporary fashion industry, the Smockshop develops a Modernist tradition of clothing design and manufacture that extends back to the Russian avant-garde’s emphasis on utility and economic simplicity. Although the clothes range from monochrome austerity to a retro playfulness, from formal elegance to sculptural invention, they have all been made with a sense of universal functionality. Suiting most body types and appropriate in casual as well as formal settings, the smock is conceived as a garment for everyone at any time.

While the Smockshop investigates how we choose to clothe or present ourselves in modern life, Zittel has previously addressed other aspects of form and function in the everyday. Food, furniture, and shelter have all been sites of exploration into how we construct, define, and distinguish between our wants and needs. Previous examples of this ongoing development include ‘A-Z East’ (1994-1999): a small three-story storefront building in Brooklyn, New York, that was the testing ground and showcase for her artistic inquiries into why people eat, sleep, dress, wash, and live in the ways they do. In 1999, Zittel relocated her enterprise to ‘A-Z West’: a 25-acre site in California’s desert where Zittel’s home, studio, and ‘experiments in living’ research and development facility continue to be based.