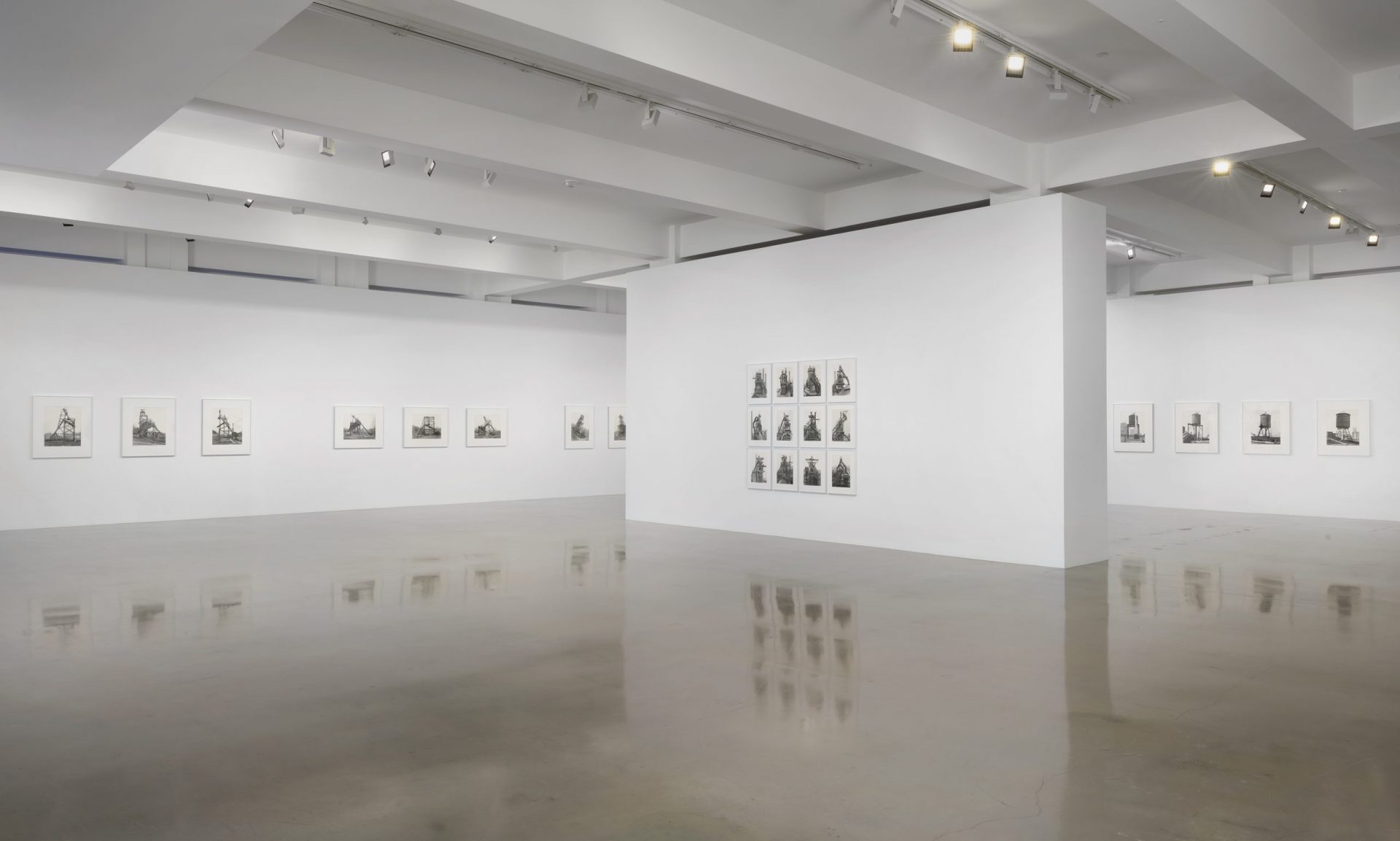 In a photographic project spanning five decades, Bernd and Hilla Becher documented the soon-to-be-forgotten architectural forms of industry – Mine Heads, Blast Furnaces, Water Towers, Coal Bunkers, Cooling Towers, Industrial Facades, Gas Tanks and Grain Elevators, to name but a few. Systematically photographing each structure, the artists examined their shared qualities and categorized the images into grid typologies or displayed them individually. Their first show at Sprüth Magers, Los Angeles, and their first in the city in almost ten years, will feature three typologies and twenty-five individual works, presenting in total six different types of structures.

The three sets of individual works on display in the exhibition were all taken in the United States: Coal Mine Tipples in Pennsylvania, Water Towers on New York rooftops, and Grain Elevators in the Midwest. The skeletal wooden Coal Mine Tipples look precarious in their construction, while the iconic Water Towers in their urban environment possess a stoic rigidity. The Grain Elevators have a somewhat haphazard appearance, an amalgamation of different materials and surfaces. Works across these series are photographed frontally and from a three-quarter perspective. This is part of the rigor with which the Bechers conducted their photographic studies: with a keen awareness of how environmental conditions could affect the photograph and using a large-format camera that straightened out lines. This ensures the photographic subjects are shown in the clearest way possible, without distractions and with their structural principles most evident. The technical precision of the Bechers’ pursuit allowed the objects to speak for themselves.

The classification systems that the photographers used in their multipart typologies emphasize both the individuality and shared characteristics of each structure, presented here across three grids of Cooling Towers, Blast Furnaces and Industrial Facades. In each typology, the structures depicted may come from different regions and countries, presenting a language of heavy industry that has developed independently across borders. The diversity of forms between structures that all serve the same purpose is of particular note, revealing the relationship between form and function. Their sculptural qualities are enhanced by the muted tonal black and white in an obsessively formalist style indebted to the German ‘New Objectivity’ of the 1920s, particularly the work of Albert Renger-Patzsch, August Sander and Karl Blossfeldt, who photographed primarily buildings, people and plants with a similarly scientific, taxonomic eye.

The structures in the photographs are a testimony to their generally unknown engineers and architects, as well as to the generations of people who used them. As the Bechers argued, they are a form of anti-architecture that relates to the infrastructure that makes things work. Photography’s ability to give a precise portrayal facilitates the discernment of discreet types, enhanced by a rational approach to photographic presentation and installation. The photographs are a requiem for a lost world, and they testify to how these since-destroyed, functional structures can achieve a certain level of beauty when seen through the eyes of attentive photographers.

Under the instruction of Bernd and Hilla at the Kunstakademie Düsseldorf beginning in the mid-1970s, a new generation of photographers including Andreas Gursky, Thomas Ruff, Thomas Struth and Candida Höfer began to forge a contemporary vision indebted to their teachers’ practice. Producing topographic perspectives of urban and rural landscapes on a large scale, and supplemented by an interest in American color photography, notably that of Stephen Shore, whose work the Bechers greatly admired, they continue the objective, analytical photographic style that their mentors propounded.