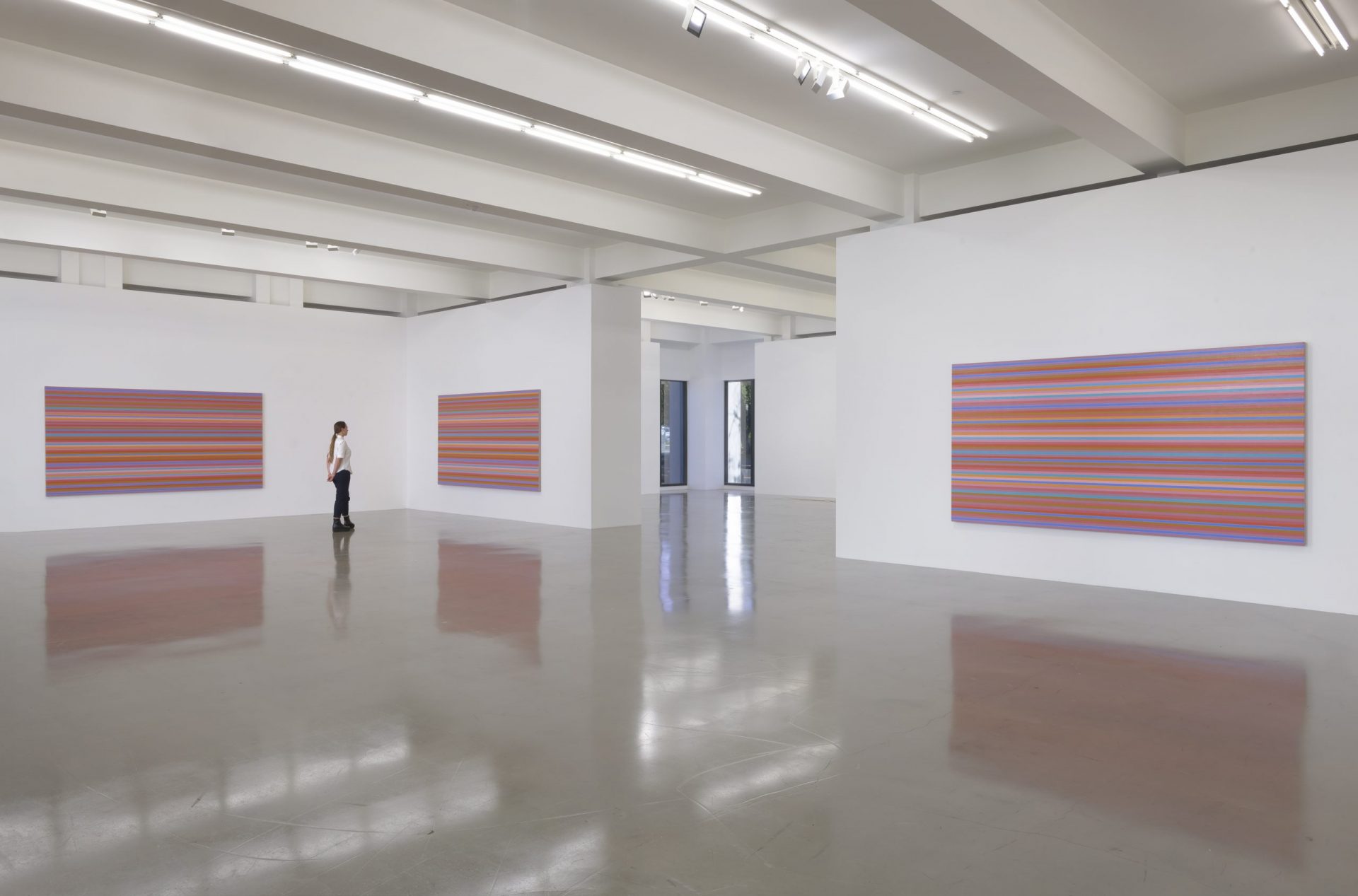 'Let the hand be numb, but let the eye be agile, perspicacious, well learned.'

Comprising work made between 1960 and the present, ‘Bridget Riley: Painting Now’ surveys the development of Riley’s career-long exploration of looking and seeing in relation to the capacities of painting and picture making.

It has been written of Riley, famously, that 'No painter, dead or alive, has ever made us more aware of our eyes than Bridget Riley' (Robert Melville, ‘New Statesman’ magazine, 1971). The truth of this pronouncement has been shared by generations of viewers internationally, for whom the experience of looking at Riley’s paintings has been visceral, compelling and enfolding.

The subtitle of this exhibition, ‘Painting Now’, is taken from that of Riley’s William Townsend Memorial Lecture, given at the Slade School of Fine Art, London, in 1996. In her lecture, Riley made a personal, generational and art-historical case for the tireless capacity of painting as a form of art, in the face of fashion or shifting ideas about its purpose or relevance, to be in a state of perpetual and inspirational renewal. 'A lot of good paintings have been made in the belief that painting was in danger and had to be rescued, rediscovered or reinvented,' Riley stated, while explaining how the cause of painting, which can be one of meaning and spiritual uplift, has been advanced above all through a lineage of problem-solving.

‘Painting Now’ is dedicated to surveying Riley’s work and ideas in relation to both the historical role of painting and its place within the broader context of contemporary art and cultural discourse. As such, the overwhelming sensory power of Riley’s art, in terms of looking and seeing and feeling, doubles as an invitation to consider the intellectual, philosophical and spiritual questions or experiences that her work enables.

Bridget Riley’s investigation into the interactions of color, shape, composition and human perception have captivated viewers since the early 1960s. The result of painstaking experiments into the subtleties of tonal arrangements and formal variations, her canvases have the power to evoke an array of moods, impressions, and recollections. Sprüth Magers is honored to present 'Bridget Riley: Painting Now', at its Los Angeles gallery. This momentous exhibition is the first devoted to the artist’s work in Los Angeles in over fifty years.

Presenting Riley’s work in Los Angeles provides a crucial opportunity to contextualize the artist’s practice within the parallel fields of light, space and perception that were so fundamental to artists working in Southern California in the same postwar moment as Riley, including Robert Irwin, James Turrell, Larry Bell, and fellow painter Mary Corse. The exhibition includes examples of early black-and-white paintings by Riley, such as the lyrical Horizontal Vibration (1961) and the undulating Descending (1965), which at the time linked her work to the so-called Op Art movement of the sixties, but are best understood as explorations into the gaps between visual phenomena, perception, and consciousness.

Throughout the 1960s, Riley’s canvases expanded in scale and palette, leading to the monumental scope and flickering visual effects of stripe paintings such as Late Morning 1 (1967). The stripe motif has remained an enduring feature of her practice, as evidenced by a recent triad of canvases, Memories of Horizons 1–3 (2014), whose bands of bright, rotating colors illustrate how the artist’s sustained attention to particular aesthetic combinations produces delicate atmospheric shifts from one painting to the next.

Arranged by conceptual and compositional affinity rather than chronology, the exhibition offers visitors unusual insight into the artist’s thought processes, working methods, and deep engagement with the history of painting. An example from one of Riley’s earliest pointillist works inspired by Georges Seurat and Paul Cézanne, Pink Landscape (1960), is placed in dialogue with a minimalist painting comprised of gradated gray and black circles, or “discs.” Though the works’ figurative and abstract subjects may be unrelated, the scintillating visual effects that Riley creates in both canvases, using her repetitive, gradually shifting strokes, clearly connect them.

The artist's recent disc paintings and wall paintings from Measure for Measure and other series extend this line of inquiry into the present, with a palette of orange, lavender and green that links full circle back to the artist's early landscapes. Throughout her paintings, Riley places specific colors one next to the other so as to question how we observe chromatic relationships in different contexts.

A catalogue will be published in tandem with the exhibition, with contributions by Bracewell and other Riley scholars.