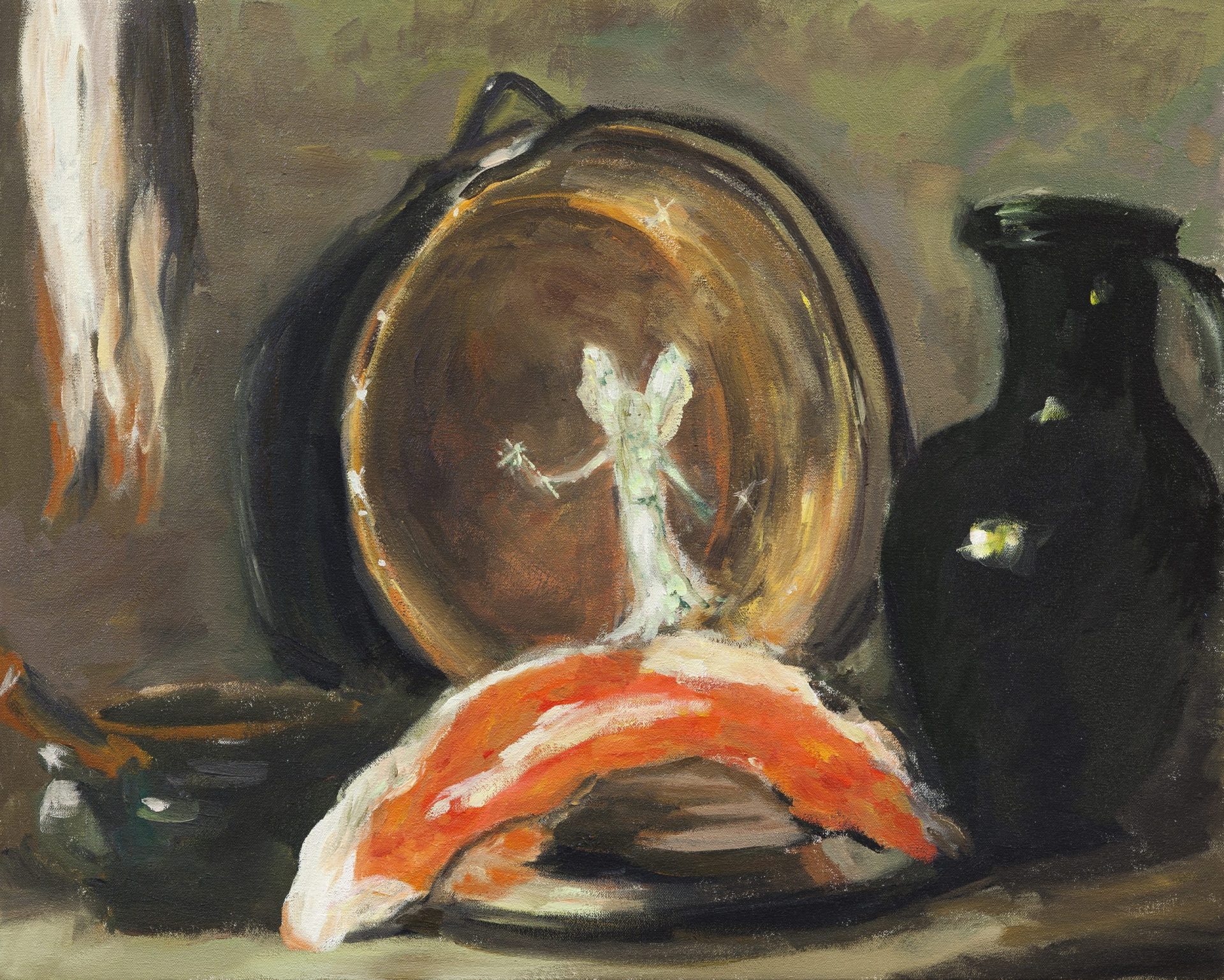 For her third exhibition at Sprüth Magers, London, Karen Kilimnik has created a group of small-scale paintings based mostly on appropriated images, many of these from traditional Delftware, which she suffuses with her own imaginative preoccupations. The resulting body of work, made over the past two years, expresses the artist’s enduring qualities of openness and precision, elegance and humour.

The painting reconnaissance – a country house in Polish countryside (2013) depicts a road that narrows into the vanishing point of the picture, bordered by rows of trees, all in a range of cobalt blues. Although the landscape could be a country road anywhere in the world, and was probably based on a painting from the Dutch Golden Age, Kilimnik imagined the scene as an escape across Poland amid the tumult of World War II, overlaying the found image with a new narrative that reflects the artist’s interest in history. There is also an important interplay of scale, format and genre in the ‘Delftware’ work. Even while the dutch water scene (2013), for example, retains the size, shape and palette of a Delftware plate, the new painting restores the emphasis on actual landscape. Kilimnik reinstates the painterly surface and atmospheric effects we expect of landscape painting while retaining the object-like scale and shape of the plate. Kilimnik brings the same process of conversion and ambiguity to her 'tapestry' paintings. In the green faerie's cottage in the tapestry (2015), we see a fairy-tale realm that Kilimnik derived from a tapestry, yet the new painting introduces a degree of depth and vividness to the landscape that the original lacked. The blue palette of Delftware continues into the photograph Fairies in the Farm Field, France (2015), and so does Kilimnik’s interest in World War II. Synonymous with European battlefields, the poppies in the photograph are magnified and presented with vignette borders as if viewed through wartime binoculars.

Kilimnik’s engagement with history takes a different turn in two paintings based on the life of Leonardo da Vinci. Motivated by her fascination with castles, heraldry and art history, the artist visited the Château du Clos Lucé in the Loire Valley, France, where da Vinci was invited by King Francis I and where he spent his final few years. Kilimnik took photographs in the interior of the chateau, and from these she painted Leonardo da Vinci's last home - the dining hall and Leonardo Da Vinci's living room, Amboise 1500 (both 2014). The two paintings, with the beautifully rendered timbers and brickwork, the table and goblets, the window upper right, and the tapestry on the wall, are almost identical, but the living room work includes a unicorn creeping into the left side of the picture. Kilimnik disrupts the scene with a spectral figure, an abrupt intrusion of the artist’s imagination. The unicorn seemed an apt addition to the artist because they frequently appear in French tapestries – not to mention Leonardo’s fondness for drawing horses.

This intrusion of the imaginative into history, or the present day into the past, reaches its playful best in the Fairy cleaning the copper pot with Fairy Dish Soap (2014). When the artist first came to England, the name of a common household product captivated her: ‘Fairy’ washing-up liquid. The soap seemed to infuse the mundane act of scrubbing dishes with the fantastic. The painting, based on a Chardin still life, shows a ghost-like fairy figure, right arm aloft and a wand in hand. Behind, the copper pot sparkles as if freshly cleaned. The Fairy cleaning the copper pot with Fairy Dish Soap gives the viewer a direct encounter with the unguarded verve of the artist’s wit, always balanced by her assured sense of colour and form.

Inquire
Karen Kilimnik
the green faerie's cottage in the tapestry, 2015

Inquire
Karen Kilimnik
the green faerie's cottage in the tapestry, 2015