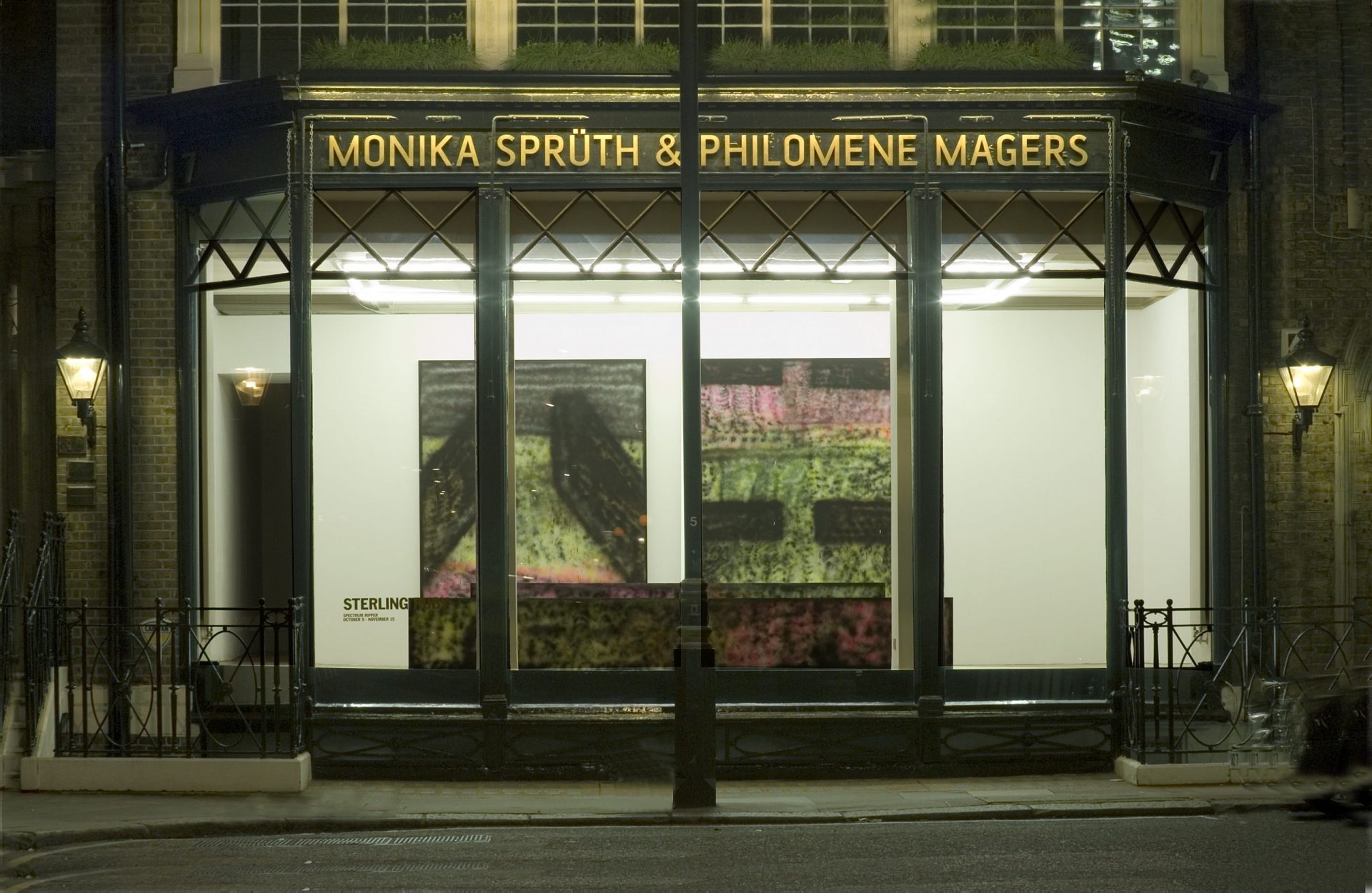 Monika Sprüth and Philomene Magers are delighted to announce SPECTRUM RIPPER, the first UK solo exhibition of Los Angeles-based artist Sterling Ruby. Ruby speaks for a generation of artists who seek to re-inscribe the experience of physicality, sexuality and death into minimalist art. SPECTRUM RIPPER is the last of a three-part Ripper trilogy, which began in September 2008 with ZEN RIPPER at Galleria Emi Fontana in Milan and GRID RIPPER at GAMeC in Bergamo. Based on US vernacular, the RIPPER series is concerned with the deconstruction (“ripping”) of modernist tropes, such as “the grid” as the ultimate harmonious geometry, “Zen” as a religion-cum-interior design movement, and the color spectrum as a trope for the metaphysical.

In the main gallery space Ruby has installed a pair of large paintings and two sculptures made from Formica and covered with industrial spray paint. The gritty urban aesthetic of these materials contrasts with the minimalist form of the works. The combination of contemporary street graffiti and modern sculpture allows Ruby to question the canonical position and alleged lack of subject matter of American minimalist art, as espoused by Donald Judd. Fascinated by prison architecture and banal urban design, such as the humble bus stop, Ruby argues that minimalism has in fact always been inherently political. It was in fact Ruby’s move from Chicago to LA in 2003 that marked a shift in his practice: Ruby made the link between the demarcation of an art movement and the tags of LA’s street gangs. As a mode of territorialization street graffiti became an important inspiration for Ruby.

In SPECTRUM RIPPER Ruby seeks to undermine the dogma of "pure" minimalism, but he also challenges the idea of the color spectrum as a symbol of enlightenment or heightened state of consciousness. By infusing black into purity of the color spectrum, Ruby contaminates the romantic notion of the spectrum as "innate." Pale yellow, turbid pink, and acid green become the means by which Ruby erodes the geometric rigidity of the sharp-edged sculptures. Ruby’s work is a metaphor for the oppositional relationship between the "conditioned" and the "innate." This exhibition is the result of the artist’s struggle to negotiate between these two states of existence.

Once described as treading a fine line between "decoration and tragedy," Ruby’s art explores death and our fear of it. Profoundly influenced by Ernest Becker’s 1973 book The Denial of Death, Ruby constantly seeks to break our allegedly natural desire for heroic beauty and its sculptural symbol, the monolith. In this respect, the two sculptures in the gallery can be interpreted as fallen symbols of male power. By bringing down the monolith, Ruby not only castrates the phallic meaning often associated with this form, but he also quotes Mark Rothko’s Menil Chapel by turning the erect sculpture into a functional device: the bench. Installed two years before the publication of The Denial of Death Rothko’s Chapel sought to enable a spiritual experience, which Becker considered to be at a crisis point at the time. While Ruby seeks to explore Rothko’s legacy and the theoretical implications of Becker on modern society, his art is also full of mischief and laissez-faire, which makes it subtle and highly engaging.