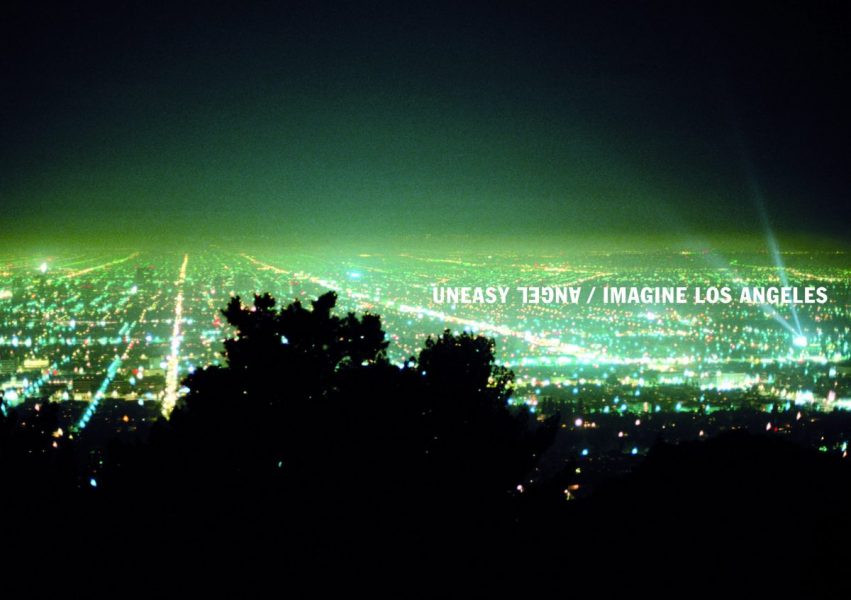 Uneasy Angel / Imagine Los Angeles is a thematic exhibition comprising the creative production of contemporary artists, writers, and filmmakers living and working in Los Angeles. In light of Umberto Eco’s and Jean Baudrillard’s notion of hyperreality, the exhibition perceives Los Angeles as just such a place—with unclear boundaries separating reality and the imaginary. In today’s information society a city cannot be seen and marketed as a static, self-contained or isolated system anymore (Castells, 2004). Yet a specific characteristic of Los Angeles is that its historical reality is absolutely democratized: fictional environments seem to be a cultural foundation, where both originals and copies serve as historical reference points. The logical distinction between real world and possible worlds has been undermined because here everything must be like reality. What then might it mean to address the artistic production of this multilayered city?

The perception of the artist as a traveling passenger in a hyperreal, interconnected space between reality and fiction serves as a starting point for the exhibition. The culture of Los Angeles has expanded to that phenomena so much, that it became an experimental laboratory for artists in their research and creation of in between spaces. Like the city itself, art created in Los Angeles could be described as post-historical and hyperreal. Anticipating the idea of the city as a fiction, simulation and simulacrum, an important notion about the myth of Los Angeles is based on the concept of fragmented, coexisting realities. Many of them are created by the local entertainment and media industry, constructing their very own dynamic and a concrete actuality.

Tracing the history of simulation, Norman Klein’s critical essay on LA aesthetics ends with a skeptical observation: “Can we see past the smoke?” Pae White’s large scale woven photograph Pae White Smoke, exploring light, texture, perception and scale, captures the immaterial quality of smoke like an imaginary, translucent sculpture manufactured from toxic air. Patrick Hill’s Soft Passage (2007) consisting of wood, canvas, glass, mirror, ink, beet and elderberry juice is an homage to surf culture, finish fetish, the light and space movement, honoring impermanence as a uniting force beyond life and death. Sister Corita Kent’s prints from the 1960s merge spirituality, psychedelia, pop culture and the aesthetic of advertising: slogans like "Wonderbread", "Yes People Like Us" or "Let’s Talk" defy cynicism and appear like a peaceful cry for a revolution advocating optimism and faith.

Confronting the dark side of LA’s sunshine more conceptually, the devil works by Robert Therrien, John Baldessari and Barbara Kruger critically address the undisputed truth of advertisement, mega-capitalism, real estate and the biased power of the markets. John McCracken’s iconic Brown Block in Three Parts (1966) is a genuine totem of something, that could be called transcendental minimalism. Sterling Ruby’s Monument Stalagmite sculptures are biomorphic constructions having at the heart of their inception both displacement and dichotomy, revolving around transient issues of expression and repression. Facing a contemporary lock down of repression via education, historical timelines, market, criminality and social standings, Monument Stalagmite/Still Slouching Towards Bethlehem (2007) is an acknowledgment of Joan Didion’s book with the same title, which predominately revolves around California in the late 1960s: the atomization of American culture, the way in which things have fallen apart and left millions adrift from the cultural and ethical moorings, that their ancestors took for granted. Moonwalk Lesson Rigo Style (2006) by Mario Garcia-Torres originates in a set of instructions, attributing to popular Mexican singer Rigo Tovar (1946–2005). Tovar, a long-haired, glittery tailored suit dressed, aviator glasses-on kind of guy incorporated the famous step to his stage dancing in the early 1970s along with his trademark jump. Without being dogmatic about it, the work is a statement related to mainstream popular culture, translating a gesture famous in the realm of pop music into an arts context.

Doug Aitken’s acid photographs This Sunn (2007) and Sunset Strip (2007) recall the possible drawback of perfectly designed surfaces. Having been treated with substances like amphetamines, Aspirin and the sleeping drug Ambien, they comment on the transience of property, the synthetic, the artificial and imaginary perfection. Paul Sietsema’s current body of work deciphers the value and the original meaning of cultural artifacts. His Group Sculptures (2007) examine the notion of Western colonialization, as they refer to design, photographs, the collection and appropriation of South Pacific culture and artifacts in Western civilization with a colonial attitude. The drawings and photo installations by Christine Nguyen consolidate utopian environments between dream and reality. Considering nature, the human body, biotechnology and energy exchange as source materials for her work, the fragile, large scale drawings resemble spaceships, long forgotten undersea landscapes and imaginary realms, containing green glaciers, foreign animals, spores and cellular structures. Lecia Dole-Recio’s subtle, quiet works are experiments on the margins of painting, drawing and collage using microscopical paper cutouts to explore abstract spaces similar to architectural grids. Patterson Beckwith’s psychedelic pop photographs Untitled (2007) of soap bubbles, shot during a real time experiment in his studio, appear like an homage to the blurry and the phenomena of immateriality.

The contemporary relevance of Baudrillard’s thinking may be to consider which contradictions are created by a highly mediated culture in terms of creating our own identities: if we live in a culture that worships desire, craving, sensation, and simulation, how can we passively observe what is? How can we acquire a consciousness of attention to the internal such as to experience something as real?

When the imaginary becomes a genuine experience, the sensation behind it disappears. It is what it is, and from there can proceed without contradiction. In this way, Los Angeles and its art becomes something totally authentic.

Sister Corita Kent
the cry that will be heard, 1969

Christine Nguyen
The woods wishes you a safe journey, 2006

Inquire about available works by