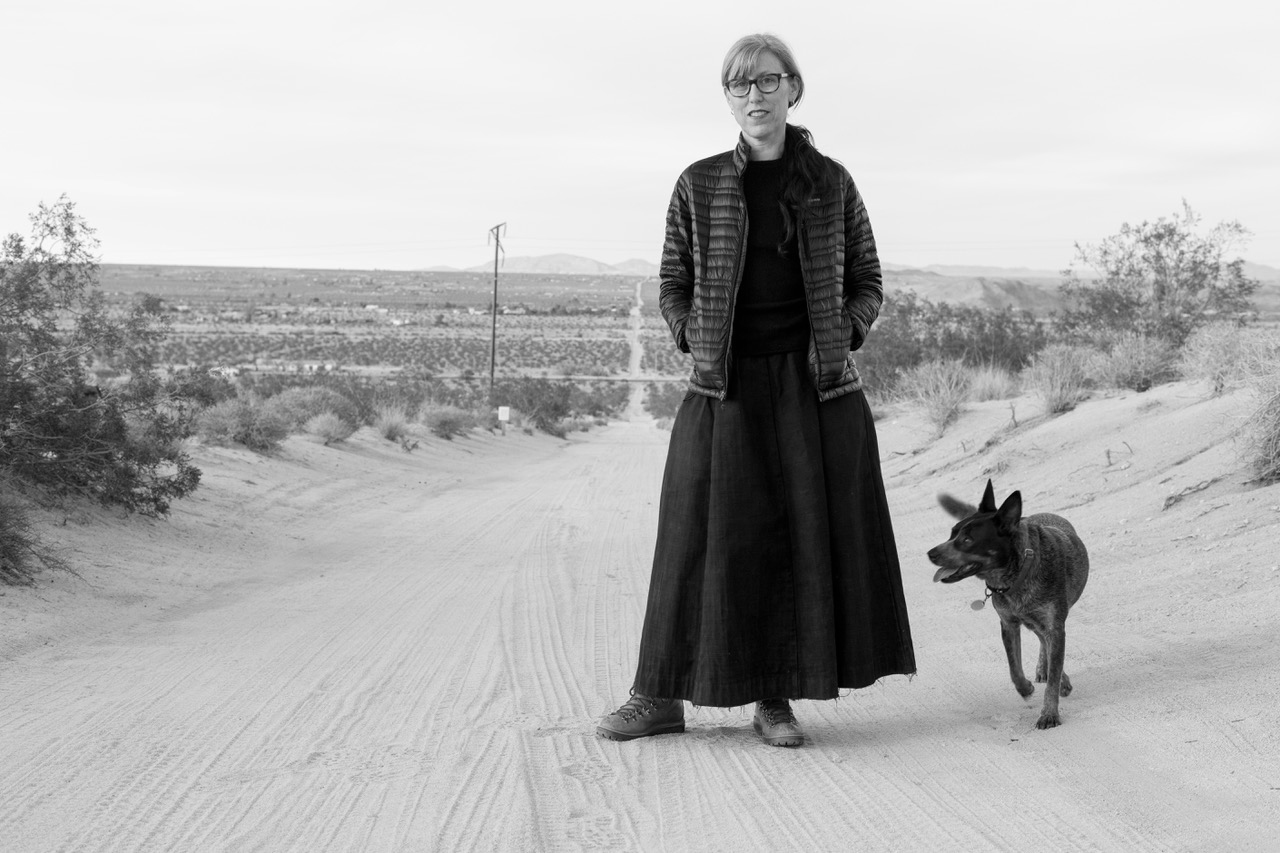 Since the early 1990s, Andrea Zittel (*1965) has used the arena of her daily life to develop and test prototypes for living structures and situations, gleaning from them an understanding of the ways in which humans construct their values, social norms and belief systems. Based in the California Mojave Desert, near Joshua Tree and its national parklands, the artist has produced works spanning sculpture, drawing, painting, video, textiles and installation that illuminate how we attribute significance to the physical spaces we inhabit, and how qualities we may find concrete and rational are often subjective, arbitrary and invented.

Zittel’s first projects developed out of her small apartment in Brooklyn, New York, and reflected the craft-based, “do it yourself” ethos of the 1990s. She lived within the carefully ordered confines of her A-Z Management and Maintenance Unit (1992)—a seven-by-nine foot “living unit” that offered space for the basic necessities of eating, sleeping, storing and cleaning—to explore how design and its accompanying ideologies could turn a seeming constraint into a liberating experience. Other early experiments involved living without running water for a year, spending extended periods without access to measured time, and sewing spare “uniforms,” of which she only wore one per season. Ongoing over twenty years later, the A-Z Uniform series has expanded into an array of designs in natural fibers that perfectly encapsulate Zittel’s impulse to simplify, but also critique, our perceived need for objects, variety and individuality.

In 2000, Zittel moved cross-country to establish A-Z West, her home and testing ground where physical works are created and lived with as an experiment in “investigative living.” Situated in the desert approximately two hours east of Los Angeles, A-Z West has come to encompass an eighty-acre site designed by the artist that includes a main house, personal and communal studios, homestead cabins, Wagon Station Encampments (small trailers with well-appointed interiors for rest), and site-specific sculptures. From this fecund compound, Zittel has produced paintings on wood featuring colorful geometric abstractions and views of A-Z West; sculptural Planar Configurations that create modest living spaces out of parallel and perpendicular panels, in muted primary tones and overlaid with weavings and textiles; and suites of precise watercolors echoing the planes of her three-dimensional structures. These and other projects continue to question our materialist impulses, while also savoring the beauty and orderliness of well-designed forms.

Outdoor sculptural installations have also long been part of Zittel’s practice. The A-Z Deserted Islands (1997) are mounded raft-like structures designed as self-contained floating spaces. Her Planar Pavilions, networks of platforms and walls that have been installed internationally over the last decade, welcome public use and interaction but similarly carve out and delineate physical space. Here again, Zittel emphasizes that limitations can often make us more creative, despite our continual desire for freedom and independence.

Across her many bodies of work, Zittel draws the viewer in with something seemingly familiar—a bed, a rug, a smock or dress, a minimalist shelving unit—but then presents challenging questions about the systems that generate these feelings of recognition and comfort. Her objects provoke us in their constant questioning of what we can live with and without, urging us to consider what truly generates value and meaning in our lives. Though she is drawn to concepts of economy, efficiency, and better living—lenses through which her work is often viewed—her ultimate goal is to understand our psychological relationships to these ideals rather than dictate a “correct” way to live.

Works
Andrea Zittel
Untitled (To live within or without society?), 2013

Inquire
Andrea Zittel
Untitled (To live within or without society?), 2013

How can art explore future scenarios for new lifestyles, relationships to other species, to the earth and between humans? Established in 1816 on the site where Accelerator and Stockholm University are located, the Experimental Field was an experimental agricultural science research activity that aimed to develop Sweden’s agriculture. The eponymous exhibition presents eight contemporary art practices that experiment with issues pertaining to the major challenges of our time. Taking its starting point in history, the exhibition The Experimental Field highlights and fosters discussions based on the experimentation taking place in contemporary art and science today.

With its multitude of startling new artistic styles, Modernism has remained a source of inspiration for successive generations of later artists. It paved the way for the liberation of perspective, proportion, and colour from formal verisimilitude. This living legacy is vividly reflected in the new display of modern art from our own collection, now presented in relation to 80 contemporary works from the Goetz Collection. The joint display leads to a broadening of artistic media, away from the traditional collection core of paintings to include photography, sculpture, and textile art. Many of the more recent artists also take a critical look at this legacy of Western culture and question how art, then and now, deals with the body, gender, and identity. The show features the art of Francis Bacon, Max Beckmann, Louise Bourgeois, Fischli Weiss, Rodney Graham, Wassily Kandinsky, Ernst Ludwig Kirchner, Franz Marc, Pablo Picasso, Oskar Schlemmer, Rosemarie Trockel, Woty Werner, Andrea Zittel, and many more.

31: Women, the Daimler Art Collection’s new Berlin show, references two groundbreaking presentations held at Peggy Guggenheim’s New York gallery Art of This Century, the Exhibition by 31 Women, 1943, and The Women, 1945. Initiator and co-curator was Guggenheim’s friend and advisor, the artist Marcel Duchamp. These were the first exhibitions in the United States that focused, to this extent, exclusively on women artists.

This group exhibition explores sculptures dating from 1934 to the present day that are designed to fold up, pack down, or dismantle.

The word ‘sculpture’ is often associated with large, immobile objects that are weighty and permanent. But sculpture is not always fixed in place: it can be mobile, agile and endlessly adaptable. The portability of the sculptures in this exhibition is sometimes an indication of geopolitical situations, and sometimes of personal circumstances, but always of artistic ingenuity.

Over the last 25 years I have developed a practice in which spaces, objects, and acts of living all intertwine within a single ongoing investigation into what it means to exist and participate in our culture today. 'How to live?' and 'what gives life meaning?' are core issues in both my personal life and my artistic practice. Answering these questions has often entailed the examination of social norms, values, hierarchies and categories, which are all highly articulated human constructions that are oddly meaningful and somewhat arbitrary at the same time.

’For the last twenty years my work in one way or another has examined how psychological structures, thought systems and beliefs are manifested as physical objects in the world that we create around ourselves. Most recently this research has focused on the patterns and systems that are bound to habits, schedules and rules. For instance, I live in the desert where there all of my day to day necessities are ordered on-line, and delivered to my doorstep – a never ending stream of products, each carefully packed in its own cardboard box. After I unpack it’s contents I eye the box thinking that it is a shame to throw out such a perfect vehicle – especially if it has special proportions or clearly crisp edges and corners. Soon I found myself stacking the boxes up along an empty wall, eventually devising a way to cement this irregular structure together into an integrated unit that reflects a pattern of my own life through consumption.’ Andrea Zittel, May 2011

The Smockshop is a continuation of Andrea Zittel’s long-standing aesthetic investigation into the daily routines and functional experiences of everyday life. Founded in Los Angeles in 2007, this artistic and economic ‘pop up’ experiment appeared in galleries, stores, and non-profit venues across North American before making its European debut at Sprüth Magers Berlin in February of 2009. A profit-making enterprise with social awareness, the Smockshop generates income for non-commercial artists who are not yet self-sustaining.

This is the first time the Smockshop (www.smockshop.org) has set up its stall outside North America, and it is also scheduled to be the last time it opens for business at all, making this a unique opportunity to experience Zittel’s artistic and economic experiment. Two artisans will work in the gallery for the first four days of the exhibition making the smocks that are available for purchase right after their production. The works will be then on view in the gallery throughout the whole exhibition period. The double wrap-around garments designed by Zittel collectively represent an aesthetically diverse yet functionally uniform body of work. Extending Zittel’s longstanding interest in the form and function of everyday life, the smocks develop a modernist tradition of clothing design and manufacture, extending back to the Russian avant-garde, which emphasises utility and economy, and inclines towards an alternative experience of clothing to the prevailing discourse of fashion.

Most of us to own a favorite garment that makes us look and feel good, but social etiquette dictates that we wear a different change of clothes every day. Sometimes this multitude of options can actually feel more restrictive that a self-imposed constant. Because I was tired of the tyranny of constant variety, I began a six-month uniform project. Starting in 1991 I would design and made one perfect dress for each season, and would then to wear that dress every day for six months. Although utilitarian in principle, I often found that there was often a strong element of fantasy or emotional need invested in each season's design. The experiment as a whole worked quite well, especially since dreaming up the next season's design helped relieve any monotony that might have occurred from wearing the same dress every day.

What Do You Really Need? In the California Desert, Artist Andrea Zittel Reconsiders How We Live
Vogue, article by Nich Mcelroy, April 10, 2020

A Conversation With the Greatest Artist West of the Rocky Mountains
Modern Matter, interview by Brienne Walsh, 2015

Dreambuilding in the American West
The Gentlewoman, article by Cristina Ruiz, 2015