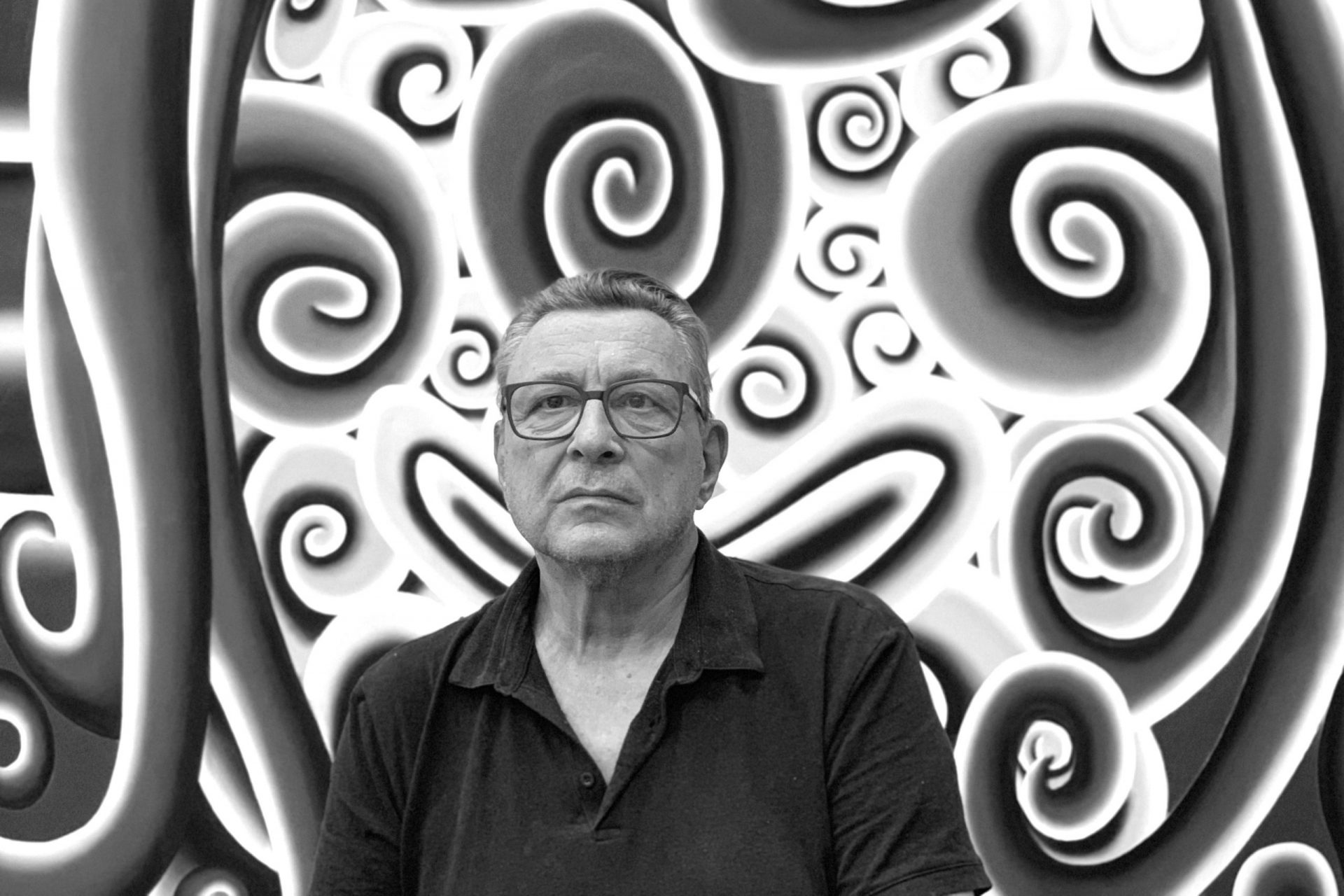 Andreas Schulze (*1955) is one of the great individualists of German painting. The artist’s unique painting style defamiliarizes basic design and architectural forms, with a cryptic pictorial repertoire that oscillates between gentle irony and friendly affirmation, menace and comfort. It exposes the blind spots of middle-class life and ironizes the pretensions of contemporary art. The Cologne-based artist has been associated with the gallery since 1983.

Since the beginning of his career on the Cologne scene in the 1980s, Schulze’s work deliberately situates itself outside of common painterly trends, attitudes and affiliations. Despite contacts to the Neue Wilde (New Fauves) of the Mülheimer Freiheit group and other Cologne artists, the painter developed his own distinctive way of painting that combines the representational with the absurd.

His repertoire of middle-class emblems thrives on the almost brazen simplicity of their pictorial settings. The “subjects” of these renderings include such commonplace things as peas, geraniums, fruit or porcelain dishes. Everyday objects such as sofas, cars, windows, rocks or Mars bars are arranged in humorous tableaux. Shaded geometric and biomorphic sausage-like shapes are contrasted with spherical color gradients in the background. Built-in kitchen cabinets, absurd pipe constructions or the kind of fringed roller found in a car wash are interspersed with abstracted household objects and the occasional indoor plant. Interiors and landscapes merge. Prefabricated houses are captured in an oblique bird’s eye view. In series that he revisits again and again, Schulze paints pictures of spheres and windows. His car paintings resemble assemblages of car doors, bumpers, and windshields, masterfully-painted yet quite possibly cobbled together by a mischievous child. Although primarily active as a painter, Schulze has repeatedly expanded his artistic universe to include sculptures and installations. He has also designed lamps and carpets himself and staged living room interiors on floor paintings that can resemble a lawn or a street intersection.

For all his independence, Schulze brings a multitude of art historical references to the fore: from Oskar Schlemmer’s Triadisches Ballett (Triadic Ballet) to Pop, surrealism and naïve painting. Yet he also defies the avant-garde propensity for assuming a superior stance of profundity. Balancing on the fine line between representation and abstraction, he carves out our collective pictorial understandings of miscellaneous everyday objects while simultaneously subjecting them to a kind of humorous destabilization. The objects are recognizable as such, and yet they also resemble patterns, designs or ornaments. They always exude something almost surreal; infused with an intrinsic logic of painterly comedy, they often have the look of something puffed-up and soft, if not inflated.

In radically simplifying his everyday subjects and thereby depriving them of their already rather banal meaning, Schulze forces viewers to question their fundamental nature. His work alternates between familiarity and strangeness and seems to express a fear of our increasingly complex society. It is an oeuvre that seems to make fun of middle-class trappings and their fetishization while also showing great sympathy and understanding about the need for such fetishes.

Schulze's paintings are not limited to the two-dimensionality of a flat image. Since the mid-1980s, his painting practice has been voluminous, expansive, even reaching into the third dimension. Painterly-plastic environments are created that test the possibilities of the medium; wall painting, spatial painting, picture in space and space in space. Schulze's work encompasses a complex interplay of paintings, wall and floor work, furniture and objects—all of which result in peculiar, surreal living environments—creating a pictorial microcosm that combines subtle humor with the abyss.

The exhibition will travel to The Perimeter, London
March 17–July 1, 2023

On the 30th anniversary of its presence along the Museum Mile, the Kunstmuseum Bonn is offering a comprehensive view of its collection of contemporary art, which is being freshly presented from new perspectives in twenty rooms. Even if the presentation shows the Kunstmuseum to be a special site for painting, fundamental roles in the argumentation are nonetheless played by installation, film and photography.

Relax exhibits for the first time a series of new glass sculptures by Andreas Schulze. Created by the artist on the famous glass-making island of Murano, these new works function as bookends and extend Schulze’s unique and highly recognizable visual language. Surrounding the sculptures are paintings from Schulze's well-known Vacanze series, whose motifs echo the theme of the exhibition in colorful, abstract images.

This exhibition is a collaboration between Sprüth Magers & DH Office and takes place at San Marco 3209, Salizzada Malipiero in Venice.

The visible also always conveys the invisible. All the more so in the cheerful world of consumerism, in which we live today. The more perfect its surfaces, the more its opposites also seem to resonate – the suppressed and the absurd. No painter has understood this better than Andreas Schulze. The Cologne based artist, who has been associated with the gallery since 1983 and a professor at the Kunstakademie in Düsseldorf since 2008, examines the most mundane objects from his personal surroundings.

The visible also always conveys the invisible. All the more so in the cheerful world of consumerism, in which we live today. The more perfect its surfaces, the more its opposites also seem to resonate – the suppressed and the absurd. No painter has understood this better than Andreas Schulze. The Cologne based artist, who has been associated with the gallery since 1983 and a professor at the Kunstakademie in Düsseldorf since 2008, examines the most mundane objects from his personal surroundings.

In his second solo show at the London gallery, the artist will present two ceramic sculptures alongside a selection of paintings, depicting landscapes inspired by the artist’s recent expedition to the island of Sicily. Schulze has been recognised as an inventor of new pictorial worlds, having developed an autonomous and unmistakable visual language with which to explore various interior views of society. A fundamental theme in the artist’s work is the power of painting to create illusion, giving multifaceted treatment to the theme of the interplay between being and appearance, reality and staging in the medium of painting.

In his third solo show at the Berlin gallery, the artist will present two ceramic sculptures alongside a selection of paintings, depicting landscapes inspired by the artist’s recent expedition to the island of Sicily. Schulze has since been recognised as an inventor of new pictorial worlds, having developed an autonomous and unmistakable visual language with which to explore various interior views of society. A fundamental theme in the artist’s work is the power of painting to create illusion, giving multifaceted treatment to the theme of the interplay between being and appearance, reality and staging in the medium of painting.

Ever since the 1980s, Andreas Schulze has focused on various interior views of our society. Most often, his works depict everyday landscapes and bourgeois idylls which he constructs as subtle, parallel worlds to reality. His early paintings consist of intensely colored compositions in which the dimensions of sculptural globes and other geometrical forms are shifted and inner pictorial perspectives constantly change. In the exhbition, Schulze is presenting his works in a specific setting within the exhibition space, which thereby becomes a component of the suggestive pictorial spaces. The arrangement interweaves real and fictional space, and develops a productive interplay between painting and installation.

At the center of the installation is the model of a miniature city from Schulze's collection of model trains. The walls of the exhibition room are covered with wallpaper and surround the model like a landscape; posters advertise the tourist attractions of Saxony and Dresden. With this model, however, it is a matter not of a true-to-reality representation, but of a fictional cityscape which is drawn from personal and narrated memories, information conveyed by the media, and associational set-pieces. Similarly as in other works, Andreas Schulze is concerned here with an approach to reality, with the possibilities of its representation and the emphasizing of the artificiality of this depiction.

Presenting five ceramic sculptures and two major new paintings, the exhibition showcases the appealing complexity and subversive luminosity of Schulze’s craft, a practice which has earned him widespread respect and extensive influence amongst both his contemporaries and younger artists for over three decades. Dominating the exhibition are two large-scale paintings which typify Schulze’s vibrant and powerful visual style. While stylistically Schulze’s paintings have often echoed and indeed drawn on a Modernist painting tradition which stretches back to artists such as Giorgio de Chirico, conceptually and attitudinally his work is suffused with the postmodern sensibility of his contemporaries. Juxtaposed against the Unheimliche atmosphere of Schulze’s paintings are his more playful and ebullient, yet nonetheless ironic evocations of the Gemütlich in the ceramic sculptures.