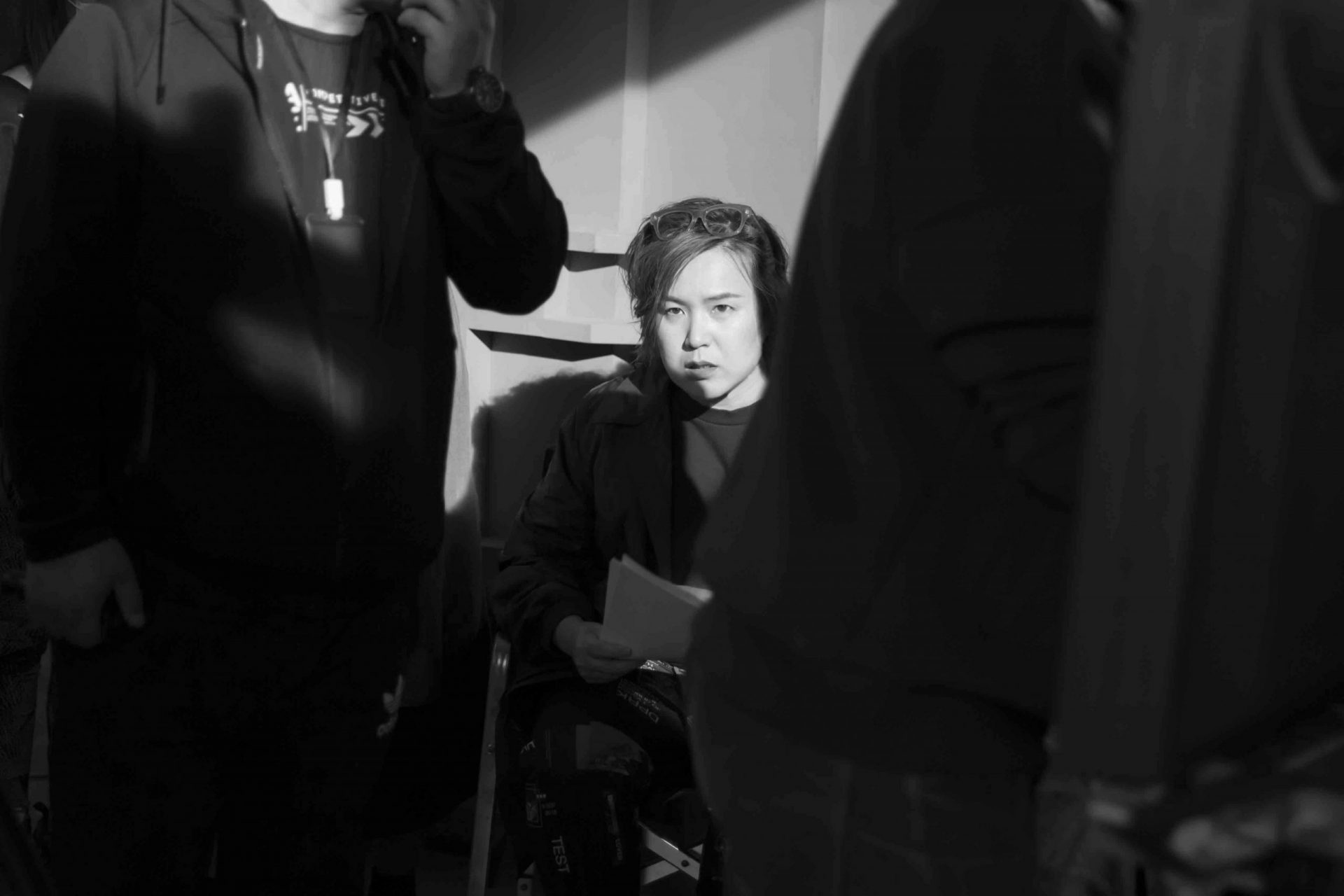 The films, videos, photos, digital projects, drawings and complex multimedia installations of Cao Fei (*1978) explore far-reaching social changes in our era of globalization, urbanization and digitalization. The Beijing-based artist’s oeuvre sheds light on the ways people react to these developments and integrate them into their lives. Operating as both artistic invention and social documentation, the visual language of her work verges on the fantastic, with a melancholy atmosphere leavened by moments of humor and surreal beauty.

Cao’s earlier works observe with great accuracy and empathy the longings, ambitions and desires that people often live out online today, and the consequences this has for their self-image. Video and photographs in her Cosplayers (2004) series, for instance, show teenagers dressed in the colorful costumes of Japanese manga warriors. They roam urban and suburban landscapes during the day, only to spend their evenings in the cramped confines of their families’ small apartments. They are the protagonists of China’s first youth subculture mediated by the Internet, and their daydream-like role-playing seems an understandable reaction to the unforeseeable upheavals of the society in which they live.

In many ways, Cosplayers also explored the emerging neoliberal collective identity brought on by global networking, a theme Cao would continue to probe in later works. Her celebrated project RMB City (2007–11) was named after the renminibi, the Chinese currency often abbreviated as RMB. It was created on the then immensely popular cyberspace platform Second Life and can still be found there today, albeit largely abandoned. RMB City is an exuberant virtual island metropolis whose buildings either imitate real, iconic structures from all over the world or were entirely inspired by fantasy; Cao invited other artists, curators, architects and collectors to contribute to its design. The cyber-city’s hallmark is a giant bicycle wheel reminiscent of Duchamp. The project, which has been documented in a series of hypnotic video works, is less the invention of an alternative parallel world than the narrative processing of the existing world of China, its incomparable construction boom and turbo-capitalism. While initially optimistic in its outlook, the project gained more post-apocalyptic traits near its end.

The idea of the post-apocalyptic is even more prominent in the artist’s recent works, whether in feature film-like videos such as Haze and Fog (2013) and Asia One (2018) or the stop-motion film La Town (2014). In the miniature dioramas of La Town, Cao ironically sketches the disaster scenario of a collapsing civilization. The film’s soundtrack consists in dialogue, written by Marguerite Duras, from the film Hiroshima, mon amour (1959). Both of her two fictional feature films allude to the figure of the post-apocalypse in a more oblique way. Asia One is about the last two people in a gigantic logistics center in Shanghai. The center’s automated distribution is operated entirely by robots and artificial intelligence who increasingly view the two protagonists as a nuisance. Haze and Fog, an elegant black comedy, is set in a wealthy district of Beijing where inhabitants perform everyday tasks that keep tipping over into the surreal. They dance in the supermarket, do yoga on a ping-pong table, play golf in their apartments or lie down in a bathtub filled with rubber balls made to look like watermelons. They are so immersed in their activities that they fail to notice how their lives are being thwarted by a growing group of zombies.

The contemporary critique in Cao Fei’s work is as subtle as it is virtuosic. Her oeuvre deals with the psychosocial effects of new media, the phenomenon of loneliness in a technologized and virtualized world and the social consequences of digital capitalism and expanding cities. Yet its tender, precise and poetic view of the world remains unchanged. It is a perspective of inimitable humanity, far more compelling than any invocation of disaster.

ZiWu the Bund presents Cao Fei: Ice Room Langrange, an investigation into how new technologies impact our day to day lives. In immersive installations showing all new works that contrast retro-science fiction with the minimalist futuristic aesthetics of the past decades, Cao Fei questions how we find balance between the allure of an all-virtual world and our lived-in reality.

This fall, Kunsthal Charlottenborg presents a solo exhibition featuring the critically acclaimed Chinese artist Cao Fei. She is particularly known for her ambitious film installations, which combine social commentary and popular aesthetics as the basis for reflecting on the extensive developments taking place in Chinese society today.

Jon Rafman, You Are Standing in an Open Field (Mental Tarveler), 2020 © Jon Rafman

The American writer Ray Bradbury said: "Science fiction is the art of the possible." Under the guise of anticipating the future, it speaks to us of the present. It is a laboratory of hypotheses that manipulate and extrapolate the repressive norms and dogmas of today's world, its ambitions, social afflictions, opportunities and perils. A Gateway To Possible Worlds exhibition brings together over 200 works from the late 1960s to the present day. Art & science fiction whisks visitors away to a 2300m² sci-fi world. It puts the spotlight on the bonds between imaginary worlds and our reality with the help of artists, authors, architects and film directors. It builds on current demands for 21st century utopias to spark debate, inspiration and a form of hope.

I'll be your Mirror: Art and the Digital Screen
Group Exhibition
Modern Art Museum of Fort Worth
February 12–April 30, 2023

Screens affect nearly every aspect of life today. Their pervasiveness has bred a 24/7 breaking news cycle, the looming corporate-sponsored virtual-reality “Metaverse,” unlimited accessibility and content, and an ease in how ideas and images are distributed, undoubtably shaping culture in profound ways. The Modern Art Museum of Fort Worth presents the landmark I’ll Be Your Mirror: Art and the Digital Screen, a thematic group exhibition that examines the screen’s vast impact on art from 1969 to the present. This exhibition surveys more than sixty works by fifty artists over the past five decades. The artists included examine screen culture through a broad range of media such as paintings, sculpture, video games, digital art, augmented reality, and video.

Sprüth Magers, Los Angeles is pleased to present a solo exhibition of work by Cao Fei that highlights the artist’s recent projects, presenting several of them in Los Angeles for the first time. Films and photographs from her feature-length films Nova (2019) and Asia One (2018), as well as photographs related to previous groundbreaking projects such as Haze and Fog (2013) and La Town (2014), will transform the Los Angeles gallery, transporting visitors through the artist’s reflections on the rapid urbanization of her native China in the wake of mass cultural, social and technological upheavals.

Cao Fei on the limits of truth and virtuality
Artforum International, interview by Zack Hatfield, March 15, 2020

Q. and A.: Cao Fei on Art, Motherhood and Walking the Political ‘Red Line’
The New York Times, interview by Amy Qin, April 7, 2015