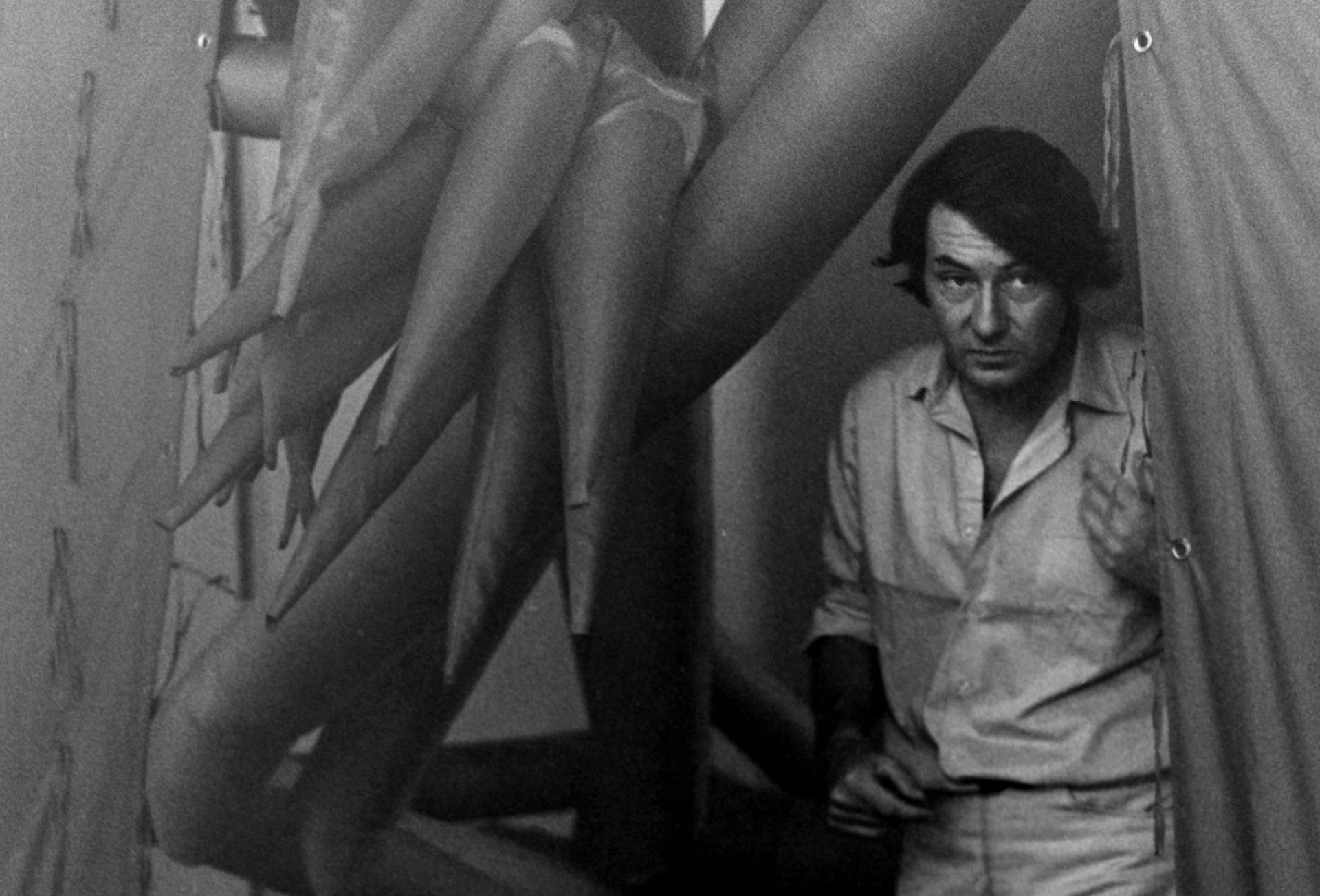 Otto Piene in the installation Red Sundew 2 at the Honolulu Academy of the Arts, 1970
© Otto Piene Estate / VG Bild-Kunst, Bonn

Otto Piene’s (1928–2014) prodigious oeuvre includes his well-known smoke and fire paintings, “light ballet” installations and “Sky Art” events along with kinetic sculptures, ceramics, screen-prints and architectural interventions. Characterized by a combination of art and technology, his work demands that viewers play an active role in the artwork. A keen philosophical thinker, Piene also wrote a number of essays about art and perception.

Piene began his career as a painter of abstract works that broke forcefully with the painterly gesture. The artist’s Grid Paintings (1957), for example, find him texturing surfaces by painting over self-embossed punch cards made of cardboard and metal. The pictures forgo content to embrace the physicality of light, its oscillations and vibrations. Piene’s first works to deliberately incorporate smoke appeared in 1959. Created by swinging a fire source near perforated, grid-like templates, the resulting pictures hover between chance and intention as chemical reactions in the pigment and fixative become elements of the overall visual composition. In a further step he set fire to the fixative to produce an eruptive efflorescence, or floral veils of various hues. Fascinated by their play of light and color, the artist would continue to produce smoke and fire paintings throughout his life.

Piene’s pictures proved seminal for the aesthetic and intellectual agenda adopted by the ZERO group, a movement he and Heinz Mack founded in 1957 to mark a new beginning for postwar European art. Other touchstones include the artist’s kinetic light objects, for which he transformed such basic geometric shapes as cubes, spheres, and cylinders into complex electronic light sources with multiple light bulbs. These objects followed a precisely timed choreography to project painting-like shadow-and-light effects on the surrounding walls. The artist would eventually apply the same approach to expansive indoor installations that resembled spherical, cosmological universes. Pieces including The Proliferation of the Sun (1966–67) or Electronic Light Ballet (1969) bring these universes to life with performative and auditory elements. Staged as light dances, they immerse the viewer in an active, live art reminiscent of theater or ballet performances.

Piene began developing what he called “Sky Art” in 1968, around the time he relocated to Boston for a position as Professor of Environmental Art at the Massachusetts Institute of Technology (MIT), where between 1974 and 1993 he also served as director of the influential Center for Advanced Visual Studies (CAVS). The projects—which were to be understood as a kind of Land Art—incorporated ephemeral, helium-filled sculptures that appeared to free themselves from the Earth’s gravity. They could involve illuminated, tube-like air structures executed as “sky drawings”—Light Line Experiment (1968), for instance—or the release of thousands of silver balloons grouped in bunches, as in Silver Balloon Event (1969). His work for the closing ceremony of the 1972 Olympic Games in Munich illuminated the night sky with a gigantic balloon rainbow.

Otto Piene’s “Sky Art” events were usually communal experiences that drew a large audience. They underscore an emphatic ritual dimension—a defining facet in all of the artist’s work. Piene’s art was conceived as an aesthetic event, but always as a social one as well. The viewer and their perception form the crucial focal point of his oeuvre. His insistent inclusion of the viewer in the completion of the artwork evoke what can only be called a moment of utopia.

Red Sundew 2
Otto Piene in the installation Red Sundew 2 at the Honululu Academy of the Arts, 1970

Red Sundew 2
Otto Piene in the installation Red Sundew 2 at the Honululu Academy of the Arts, 1970

With the title “20/20 Vision: The Collection Remixed", the Kunsthalle Bremen presents a radical new look at its collection for the first time in nearly ten years. Using bold colors on the walls, an elaborate staging and an entirely new arrangement of the works on display, the exhibition allows surprising new aesthetic experiences. Descriptions of all works on display provide in-depth information, some of which are findings from the very latest research. Several works have not been seen in public in decades. The installation will also present for the first time a number of recent acquisitions, donations, and permanent loans. Works of art created after 1945 will also be given a greater presence.

Otto Piene was an artistic pioneer, from his years as co-founder of the Zero group in Düsseldorf to his massive environmental installations across the United States and Europe. This exhibition explores his Sky Art projects in particular, illuminating their experimental, participatory and collaborative nature. This phase of his work flourished to a large degree through the opportunities and connections he made at the Massachusetts Institute of Technology (MIT)—with artists such as Nam June Paik, Charlotte Moorman and Elizabeth Goldring—where he was a fellow (1968–74) and later director (1974–94) of the Center for Advanced Visual Studies (CAVS). Some of Piene's most spectacular Sky Art performances were realized in collaboration with fellow artist and life-long friend Charlotte Moorman, who holds a special place in this exhibition.

Otto Piene counts among the pioneers of 20th century art. As co-founder of the international ZERO movement, he had a fundamental impact on how classical art forms such as painting and sculpture are perceived. His early smoke, grid and fire paintings, light ballets and light rooms enabled him to incorporate time, light, space and movement into the production of art.

Otto Piene’s use of light developed in the late 1950s with works utilising earlier experiments of printing onto canvas using punctured screens of many small holes, producing a grid of small, elevated pigment dots on the surface. These perforated ‘raster sieves’ were used in early works as hand-held tools through which to shine light from candles. This rudimentary apparatus soon developed into more complex means in 1960-61, employing metal screens, discs, motors, timers, and rotating electric lights, coming to a theatrical climax in room size installations. A selection of these elements will be presented in Sprüth Magers collaboration with the Otto Piene Estate, his first exhibition with the gallery, taking the form of a ‘Light Ballet’.