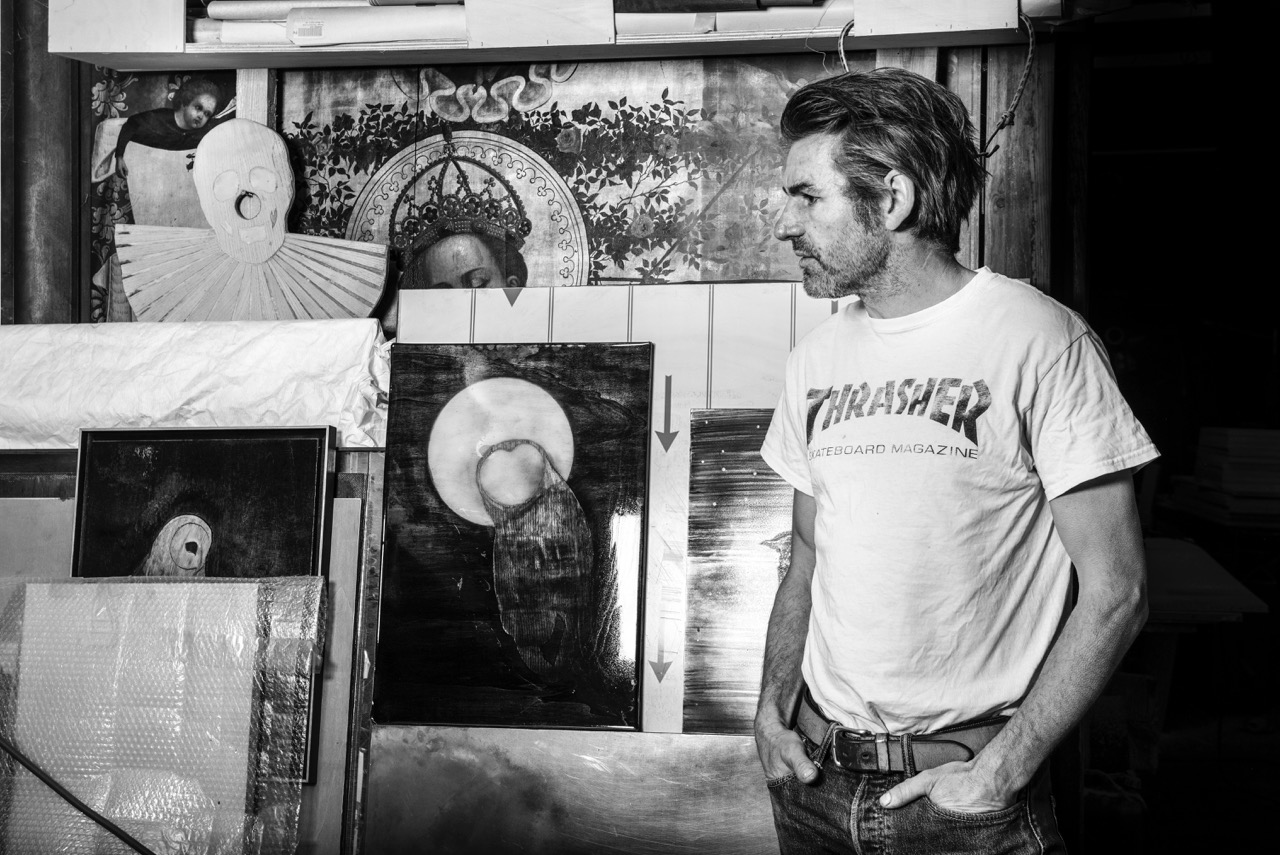 Robert Elfgen (*1972) is acclaimed for a mytho-poetic artistic universe that revolves around the relationship between human beings and the world. His assemblages, collages, light objects, videos, floor- and wall works are frequently arranged in room-filling installations that resemble walk-in paintings. The Cologne-based artist makes use of objets trouvés from his everyday surroundings, but also draws upon such traditional artistic media as metal engraving, reverse glass painting, inlay and various printing-making techniques. The often-improvised combination of found objects, images and technical approaches conjures complex associations and interconnected layers of meaning.

Bricolage is the central ordering principle of Elfgen’s oeuvre. Early works in particular also find the artist employing such readymades as a Vespa, for example, a Mercedes-Benz classic car and other modes of transport. Subtle interventions to these vehicles, their quasi-theatrical staging and integration into thematically dense spatial artworks add an almost mystical dimension. They point to travel as a rite de passage, but also clearly evoke a confrontation with death, the last great rite of passage for any of us. The objects are regularly accompanied by inlay works depicting skulls, falcons or owls, most of which directly meet the viewer’s gaze. These same motifs take the lead role in a number of installations. As symbols they embody both the end and a new beginning; they appear to guard a threshold between the worlds of the living and the dead.

The artist’s spatial installations, created with an acute sensibility for unconscious effects, usually encompass a vast array of collages, assemblages and works in various different media. They are to be understood as total works of art. More recent assemblages in particular show Elfgen’s increased use of objets trouvés: elements ranging from wicker chairs to a skateboard ramp to a monastery’s confessional. Cobbled together with fiberboard, resin or clay, they have something of a fragile character. His collages consist of found images, various textiles, paintings and inlays. The diffuse spatiality of their black-stained background recalls icons or panel paintings from the Middle Ages. Animals including rabbits, foxes, or cats are a recurring motif in almost every one of Elfgen’s installations, as are figures with averted faces, ties, umbrellas, and puddles of oil. The symbolism of these elements—also reminiscent of the art historical iconographies of René Magritte or Joseph Beuys—alludes to the human being’s place in the cycle of nature and the failure of conventional ideologies of technology and progress.

Robert Elfgen’s works thrive on a specific kind of narrative and symbolic density, on biography, everyday observations and an acute sensibility for the subliminal poetry of myths and rituals. Keenly focused on the threshold experiences of human life, their extraordinary intimacy conjures a multitude of different associations. The visible traces of their production reflect the fragmentation and improvisation that define our contemporary existence. Elfgen’s oeuvre amounts to nothing less than a highly poetic aesthetic of being.

More views
Inquire
Robert Elfgen
in and out, 2013

“I actually work like a sculptor. For my paintings, I use solid materials like wood or brass, which I can stain, saw off, and shape.”

Robert Elfgen doesn't paint his paintings, he builds them. The brightly illustrated catalogue Robert Elfgen: Painting without painting is devoted to the artistic idea that leads Elfgen to his images. Through 34 color plates, 40 illustrations, and a comprehensive text contribution, this catalogue demonstrates Elfgen's understanding of the image as embedded in the history of painting—from the Middle Ages through Romanticism to the 21st century. The catalogue also features hitherto unpublished works by the artist.

Sprüth Magers is delighted to present the solo exhibition Higgs-Boson by Robert Elfgen featuring new paintings at Sprüth Magers Window. Elfgen’s new paintings are reminiscent of romantic landscapes. The grain of the wooden base is visible through their metallic shimmering surfaces, so that the material becomes part of the work in the form of sky or water.

The exhibition's title alludes to the elementary particle Higgs-Boson, also called “the God particle,” which is highly complicated to detect: it is always there but only visible under certain constellations for a fleeting moment. In his new paintings, Elfgen refers to this phenomenon by challenging the idea of what is invisible in the visible.

In I wish my pictures, Elfgen's new exhibition at Sprüth Magers in Berlin, two thematic strands emerge into the foreground which have been latently present in his œuvre for a long time: the importance of landscape for our being-in-the-world, and the processes with which we perceive or do not perceive this world. A large assemblage sculpture, illumanted by a streetlamp protruding from the wall, is the first sight when entering the room. The exhibition reveals itself under the watchful eye of a circular mirror, into which intarsia has been inserted resembling a pupil. Landscape paintings and assemblages, the latter standing on the ground, guide through the two-parted exhibition space.

Robert Elfgen focuses on the relationship between nature, human beings, and society. Biographical experiences and everyday observations serve the artist as the point of departure for his works. When the viewer enters one of his space-related installations, the sculptures, assemblages, collages, and films are linked associatively and transformed into spatial allegories which make it possible to experience a private mythology. Transitional situations, social threshold-rituals, the cycle of nature, and the shifts of aggregate states: material and immaterial transfers provide the motifs for his symbolic, often whimsical visual worlds.

In a continuation of the artist’s interest in imaginary sites and their opening-up, the image of a quiet crossing constitutes the background to Elfgen’s new work. The situation of the passage, together with the narrative framework associated with it, is established through the arrangement of found and produced objects involving highly diverse materials. An illuminated ensemble consisting of a kayak along with picture- and light-objects takes possession of the exhibition space and engenders an intensive but also indefinite spatial feeling. Elfgen thereby creates a place which can be left behind, but which also contains the possibility of being rediscovered.

Elfgen's wooden panels, paintings and sculptures reflect his immediate, handcrafted approach to art; they oscillate between perfection and improvisation. Elfgen explores his main subjects, nature and above all the symbolism of animals, in a romantic way, rooted on the one hand in the German tradition of 19th century idealism and on the other in the artist's autobiography.

Des bien ich is the first solo exhibition of Robert Elfgen at Sprüth Magers' gallery in Cologne. After his studies at the Academy of Arts in Braunschweig (class of John Armleder) and at the Academy of Arts in Dusseldorf (class of Rosemarie Trockel), the artist realized solo exhibitions in Cologne (Simultanhalle), London (Westlondonprojects) and in Munich (Sprüth Magers Projects) as well as projects in public spaces. Robert Elfgen received the Peter-Mertes-Stipendium of the Bonner Kunstfonds, the studio scholarship of the Bonner Kunstverein and the award of the federal state NRW for young artists. Robert Elfgen lives and works in Cologne.