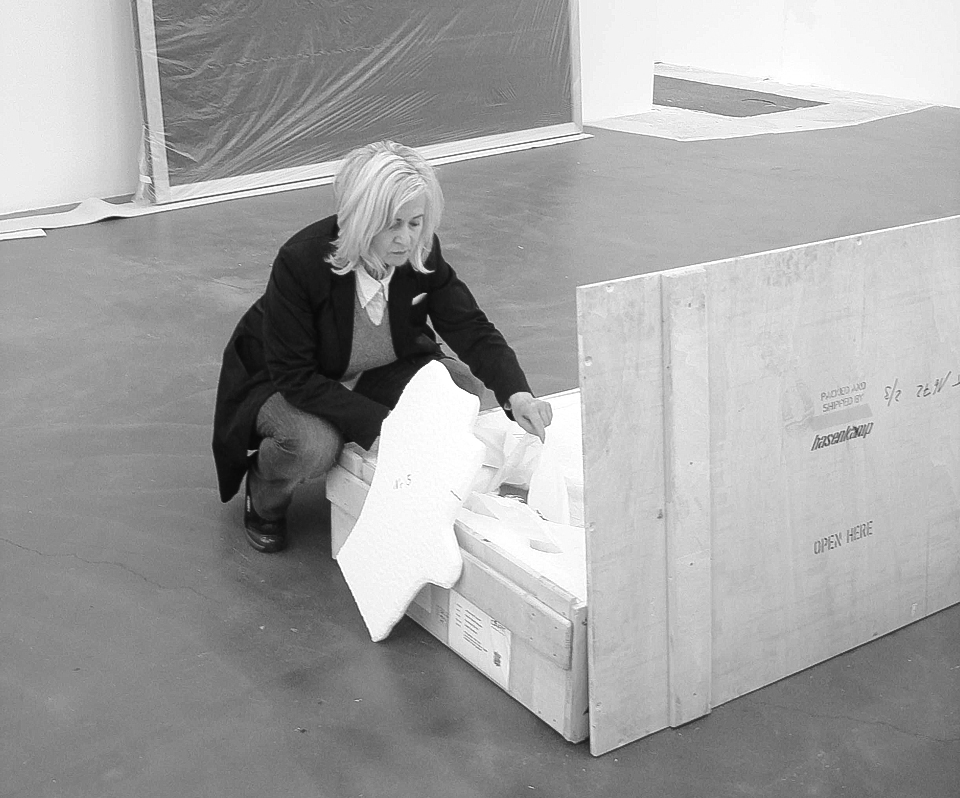 Rosemarie Trockel (*1952) is widely regarded as the most important and influential conceptual artist in Germany. Her sculptures, collages, ceramics, knitted works, drawings and photographs are noted for their subtle social critique and range of subversive, aesthetic strategies—including the reinterpretation of “feminine” techniques, the ironic shifting of cultural codes, a delight in paradox, and a refusal to conform to the commercial and institutional ideologies of the art system. The Cologne-based artist has been associated with the gallery since 1982.

Trockel made her mark in the 1980s with a series of machine-knitted wool paintings that superficially mimic the aesthetics of abstract paintings. They are rendered in monochrome or feature rhombic patterns, checks, stripes and classic knitting patterns, but also speech bubbles, trademarks including “Made in Western Germany” or the Woolmark, and logos such as the Playboy bunny or hammer and sickle. Rife with art-historical references, they draw upon Pop, minimalism, Op art and modernist abstraction. Trockel confronted the patriarchal dominance of the art world with a material more evocative of womanly housework than an artistic medium—one that was associated with virtuous diligence and had historically been used to temper women’s imagination and ambitions.

Trockel’s sculptures are characterized by a similar interplay of virtuosic irony, aesthetic-analytical sensitivity and socio-political provocation. One example are Trockel’s iconic hotplate works, for which she transforms the hotplates on electric cookers into wall reliefs, floor objects or sculptures that resemble loudspeakers and record players. The artist’s sculptural oeuvre spans from the so-called Schizo-Pullover (1988), a sweater with two necklines, to Jesus figures whose sex is revealed under a loose loincloth. It also includes a series of “animal homes” that playfully imagine dwellings for animals, going so far as to convert a wig into a House for Lice (1994). The artist has also been designing so-called Moving Walls since the early 2000s, works made of coated aluminum discs that are attached to a wall like moving sequins, transforming the wall into a picture surface that refracts light in various ways. The artist’s objects are almost always defined by a focus on the viewer’s particular physical experience in their perceptive interaction with the artwork. Constantly shifting, they undermine viewers’ understanding of objects so as to generate new, unforeseen meanings.

Trockel’s oeuvre is fueled both materially and conceptually by a constant process of collecting, overwriting and re-ordering. This impulse becomes clearly apparent in her more recent Cluster (2015–present) works, which consist of digitally reconfigured photographs that the artist recombines with idiosyncratic logic to form a kind of visual diary for various exhibitions. Or in her more recent collages, for which she applies various materials to painted wooden frames in an assemblage-like arrangement. Some of these materials quote her own works, a method that allows her to bring her radically open, free and constantly changing creative process to the fore. Trockel regards the artwork as an unstable aggregate of form and concept, deploying this radical instability to dismantle a range of cultural categories, rules and dogmas.

Rosemarie Trockel
No Woman No Cry, 2000

Black Album / White Cube. A journey into Art and Music

The exhibition presents works by some 30 contemporary artists from around the world dealing with the theme of loss. Experiences of loss, grief and change harbour a disruptive potential that is difficult to put into words or capture visually. The varied artworks on view illustrate the kinds of images artists are finding today to convey this phenomenon, revealing the significance that is still attached to traditional pathos formulas and showing that how we mourn can tell us a great deal about our present day.

On display will be two projections as well as CLUSTER IV – Subterranean Illumination (2020), a large installation of approximately 25 remastered digital prints. Hanging as a block, different photographic motifs are assembled to form a network of references that discusses both Trockel's artistic oeuvre as well as social and cultural processes.

Tell me about yesterday tomorrow
Documentation Centre for the History of National Socialism, Munich
November 28, 2019–August 30, 2020

The exhibition opens up a dialogue between contemporary art and the remembrance work performed by the Munich Documentation Centre for the History of National Socialism. Works by over 40 international artists explore how to interpret the past and its links to the present day against the background of the historical exhibition.

The work of the native Antiguan and Barbudan artist Frank Walter (1926–2009) encompasses numerous paintings, drawings, sculptures and writings, that will Works in dialogue by John Akomfrah, Khalik Allah, Kader Attia, Marcel Broodthaers, Birgit Hein, Isaac Julien, Julia Phillips, Howardena Pindell and Rosemarie Trockel revolve around colonialism in the Caribbean in the past and present as well as the intellectual contexts of colonial and post-colonial thought.

Eau de Cologne began as a series of exhibitions and three publications, organized by Monika Sprüth between 1985 and 1989, which sought to create a new dialogue around contemporary art. The exhibitions introduced a select group of young women artists, each of whom individually represented powerful attitudes and practices.

Un soir, j'ai assis la beauté sur mes genoux. And I found her bitter and I hurt her is a joint exhibition by the long-time collaborators Rosemarie Trockel and Thea Djordjadze. It is the first time that the two installations from 2007 and 2008 are on view in Berlin. The works have an allegorical nature that explores a number of themes pertinent to contemporary art. Issues around the boundaries of media, and the artwork as a fixed concept are called into question, as well as the exhibition space as a representational frame.

In Rosemarie Trockel's most recent works in wool, the material is placed like a stroke of the brush on the canvas, initiating a subtle examination of twentieth-century abstract painting. The exhibition features black monochrome pictures placed among others with vibrantly coloured stripes, creating a shifting set of colour relationships that constantly renew themselves as the viewer moves through the gallery.

Always Judge a Book by Its Cover:
Parkett, article by Christian Rattemeyer, December 2014

Since the early 1980s, Rosemarie Trockel (*1952, Schwerte) has been one of the most versatile and pioneering female artists in contemporary art. Her collages, knitting pictures, sculptures, installations and film works embark upon investigations into social role-models, gender-specific behavior and cultural codes that she combines with discourses from philosophy, theology, and the natural sciences. In these works, Trockel investigates both contemporary and historical discourses concerning artistic and social identity. Her feminist perspective challenges the concept of the male artistic genius and formulates an emphatic criticism both of the art world and of restrictive social norms with regard to social and sexual identity. Her first exhibitions took place at the galleries Monika Sprüth Cologne and Philomene Magers Bonn, both in 1983. Recent solo shows include Moderna Museet Malmö (2018/19), Pinacoteca Giovanni e Marella Agnelli in Torino (2016), Kunsthaus Bregenz (2015), travelling exhibition at Museo National Centro de Arte Reina Sofia, Madrid, at the New Museum New York and Serpentine Gallery, London (2012/2013) and Wiels Brussels, Culturegest Lisboa, Lisbon and Museion Bozen, Bolzano (2012/2013). Her 2005 retrospective Post-Menopause took place at the Museum Ludwig Köln, Cologne and at Maxxi, Rome. In 1999 she became the first female artist to represent Germany at the Venice Biennial, and in 1997 she took part in the documenta X at Kassel.