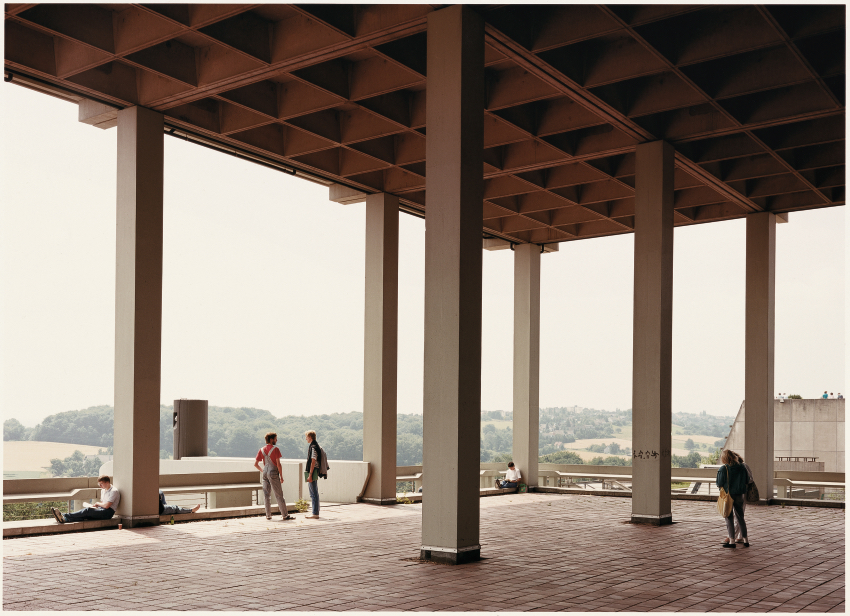 From the moment he started making photographs to the present day, the landscape has captivated Andreas Gursky. This exhibition is the first to focus on a group of important early landscapes from the late 1980s to the early 1990s. Predating Gursky’s extensive use of digital technology, and characterised by what the artist has called an ‘extraterrestrial’ perspective, the pictures are titled simply and directly after the geographical location where they were taken.

In Niagara Falls (1989), a boatload of tourists, draped in black rain gear, appears to be heading directly into a section of the falls where the white crashing water has obliterated any legible detail. If this photograph depicts a sublime landscape, Mettmann, Autobahn (1993) shows instead a calm, bucolic scene intersected by silver-grey bars. At first glance, the bars look like they were inserted into the photograph by the artist as an extreme formal gesture, but they were already at the site, integral to a Plexiglass screen that acted as a noise barrier along the motorway. Gursky noticed this interweaving of classic pastoral and utilitarian technology while driving. In Alba (1989) the landscape is similarly ageless: a river, barely a ripple in its surface and framed by a dark forest, trickles over a stony riverbed as it has for centuries. Fishermen, dwarfed by the artist’s sweeping view of the site, wade into the water.

Gursky’s early landscapes provide the viewer with the concrete experience of a specific place as well as what Martin Hentschel has called a ‘mental image … that has been passed down to us by the history of painting and inscribed into our collective memory’. The pictures conjure both a topography and a structure: Niagara Falls might be an overexposed tourist destination, but Gursky discovers a peculiar mood there. A boat transports its human freight, entranced by a white abyss, to an uncertain fate. Yet we know that these tourists won’t get swamped by the falls, however precarious they look in the picture. Moreover, the overall calm and balance of the composition has the power to counteract any overwhelming sense of threat. Likewise, even while Alba taps into our deepest sense of what a landscape might express, from ancient idylls to Caspar David Friedrich, the photograph also depicts a mundane evening in Italy. The landscape is at once itself, a specific time and place, and also something otherworldly: a picture that transcends the basic conditions of its creation.

A God’s Eye View of the World