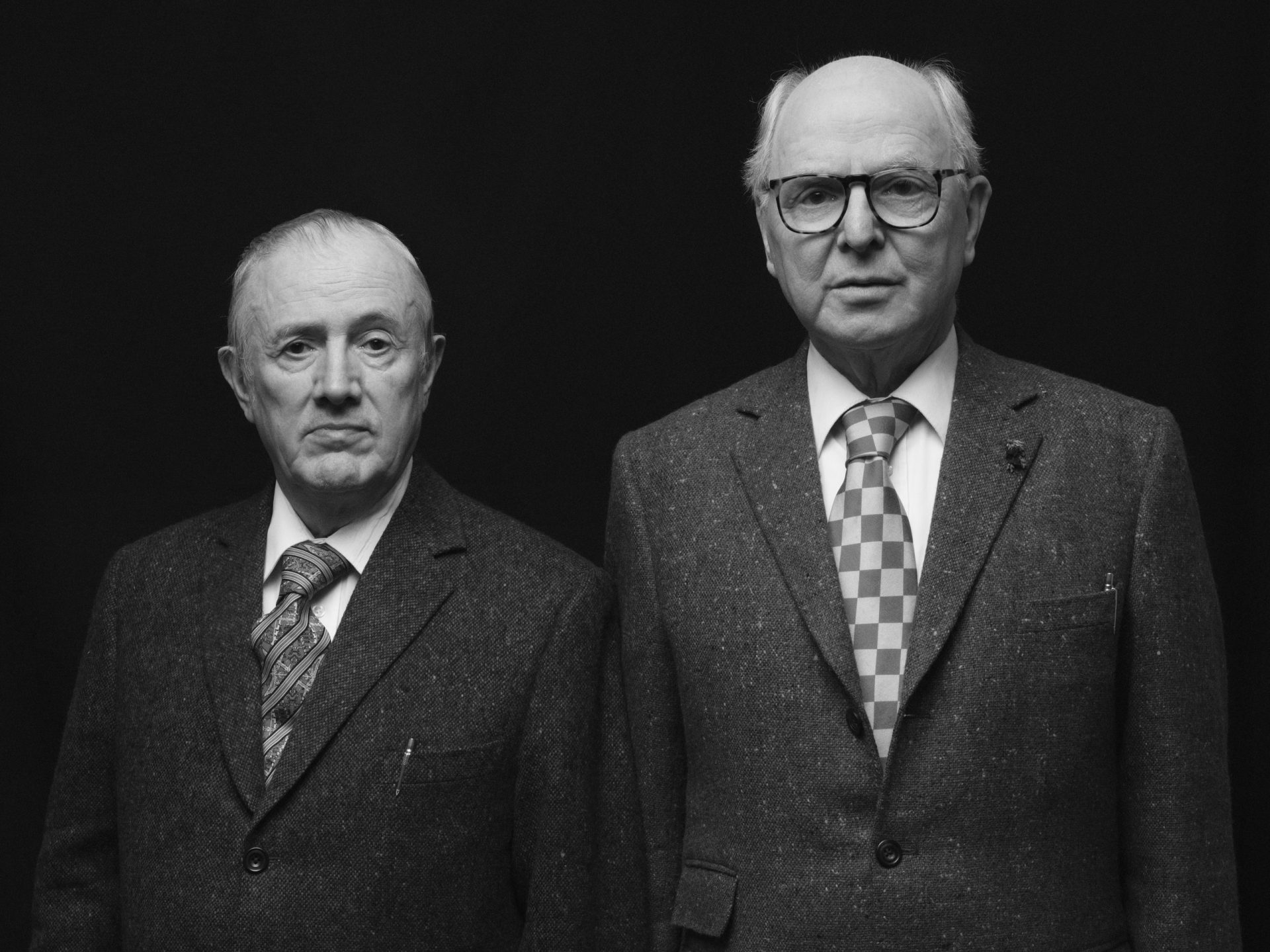 Gilbert and George are two men who together are one artist: Gilbert & George. They met at St Martin’s School of Art, London, in September 1967.

Through the experience of each picture and each exhibition, Gilbert & George believe that they as artists, the viewer and the world are changed in some way, be it great or small.

The art of Gilbert & George depicts the modern world as forcefully and directly as possible. Their vision reveals the multi-cultural, multi-faith, multi-sexual, mass-technological urban world, that is rich and poor, new and old, fast and slow, dull and unpredictable.

Their art shows the world of the modern city streets and the inner world of feelings, hopes, fears and memories.

In order to make their art, Gilbert & George must be disciplined, controlled and calm, and simultaneously crazed and guided by their feelings. By balancing these psychological states, Gilbert & George make art that is confrontational, brutal, dream-like and mysterious. Each picture contains the past, present and future.

On walks around their home in the East End of London, Gilbert & George see the routines and feelings of their fellow citizens, from all backgrounds. Office workers and junkies. They observe the spectrum of life the way you might observe the weather. This is their subject. The art of Gilbert & George is committed to realism but is also deeply romantic, finding heightened or disturbed emotion in ordinary things.

In every picture and ‘Living Sculpture’ the viewer sees the bond between Gilbert & George as profound and absolute. This duality proposes two men brought together by fate as outsiders and seekers-after-truth. Dualism structures the vision and art of Gilbert & George: two men, one artist; control and loss of control; reactionary and radical; traditional and ultra-modern. The singularity of Gilbert & George derives from their duality.

There is a magical quality to the union of Gilbert & George, as communicated by their art. The notion of two tramps, always on the outside, with only each other, journeying through life, at times seeming to be stooges of fate, at times cosmic travelers, at times old-fashioned song-and-dance men; mystical, vulnerable, supernatural, suffering, ritualistic, universal in their contradictions as much as their constancy.

Gilbert & George maintain a deeply felt opposition to art theory and the reference of art to the history or theory of art. Asserting instead the power of emotion and actuality, their art addresses subjects that are culturally excluded, neglected or disowned. Their art questions societal conventions, taboos and morality. By looking at difficult subjects the art and vision of Gilbert & George is intended to ‘de-shock’ rather than seeking to shock.

Likewise, however poetic or spectacular an individual picture or sculpture may be, the art of Gilbert & George is not intended to be an aesthetic, formalist or conceptual statement of any kind. By disrupting certainties, their art wishes the viewer to question life and art within themselves and their own experience.

In conveying the intensity of this vision to the viewer, the art of  Gilbert & George is empowered by formality rather than formalism. The more formal the demeanor and manner of Gilbert & George, the more intense and direct their communication of extreme emotional states, behavior, landscape and ideology.

The untameable extremism of Gilbert & George lies within themselves; their suits and ties have the function of bomb casing. The well-mannered conservatism of Gilbert & George and their creation of a precisely balanced paradox reverses the reactionary and the radical to declare an autonomous position of lucidity, isolation and inquiry. Suited and impassive, blindly stumbling or screaming, Gilbert & George take their places in the visionary landscapes of their art as both participants and witnesses.

The art of Gilbert & George makes the viewer think about art from first principles and primal responses: what does this make me feel and why?

The show presents a selection of 25 works from Gilbert & George’s THE PARADISICAL PICTURES series portraying a psychedelic and fantastical world beyond the streets of the artists' London studio. Completed in 2019 before the current pandemic their studies of the relationship between man and the natural world have today acquired a new and urgent resonance. Gilbert & George present a vision of paradise which is ultimately transcendental, an ominous depiction of how we place ourselves in the modern world yet also how we may change for the better.

Gilbert & George have created art together as one visionary, artistic entity since 1967, when they met at Saint Martins School of Art in London. Recognized by institutions and collections worldwide for their groundbreaking, fiercely independent and influential art across diverse mediums, they continue to produce confrontational, richly emotive and thought-provoking art that, more than fifty years later, pushes into ever-new territory. Sprüth Magers is honored to début Gilbert & George’s PARADISICAL PICTURES, a new group of thirty-five major pictures that mark the artists’ first solo exhibition in Los Angeles in nearly two decades.

At Astrup Fearnley Museet there is a big solo show dedicated to the eccentric artistic duo…
Kooness, article by Daniel Birnbaum and Hans Ulrich Obrist, October 9, 2019

At Home with Gilbert & George: ‘It has to be immaculate in order for us to make all these unpleasant pictures’
The Guardian, article by Edward Paginton, May 19, 2015