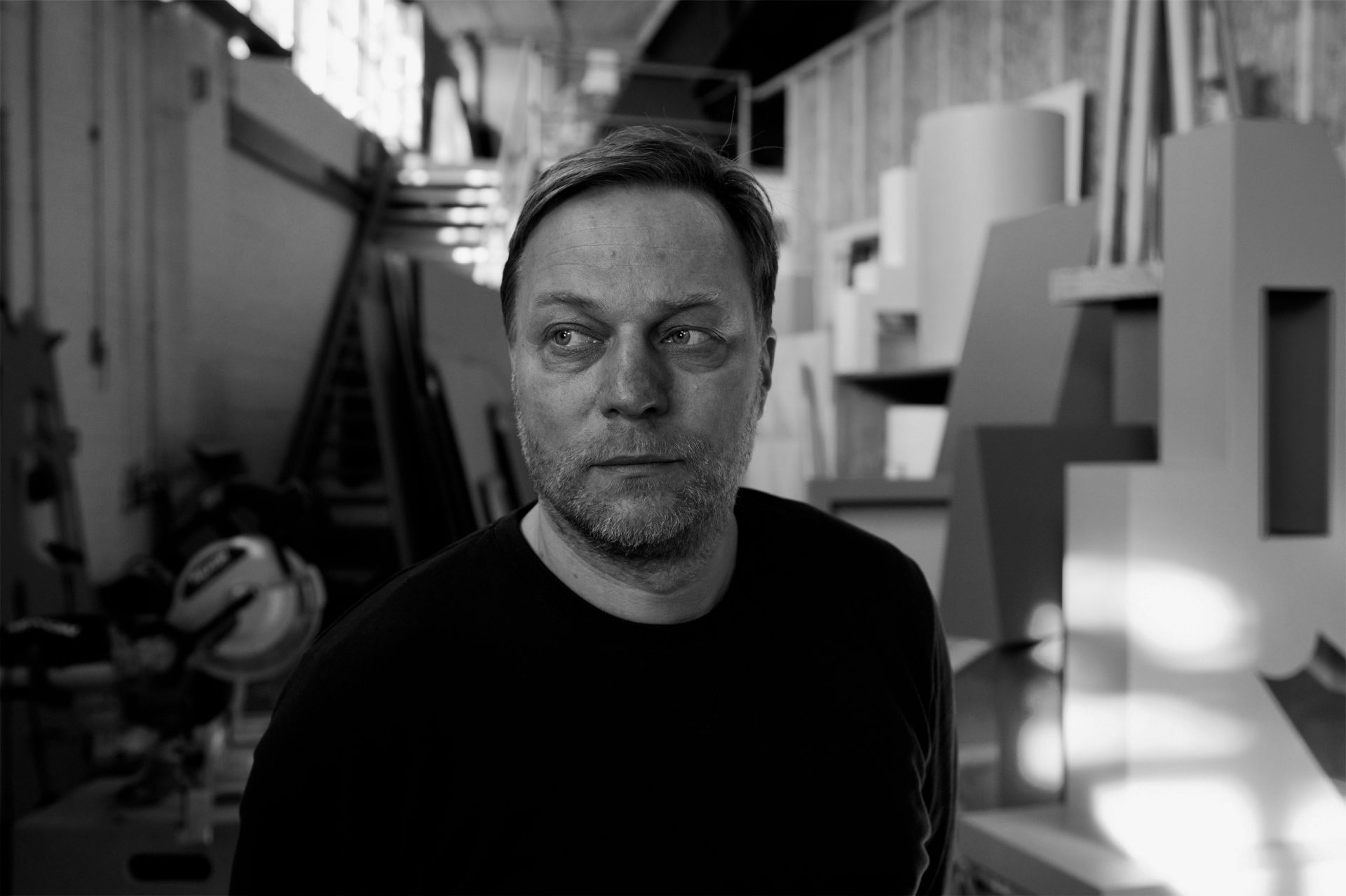 Thomas Scheibitz (*1968) is among the most important German painters and sculptors of his generation. Since the early 1990s, he has developed a kind of conceptual painting and sculpture that draws upon art-historical references, and at the heart of the Berlin-based artist’s work is a search for a new relationship between figuration and abstraction. The search leads him to not only pushing the limits of his media, expanding its potential, but also to question the contemporary relevance of this traditional antagonism between the two poles.

The starting point for Scheibitz’s artistic practice is a steadily growing collection of archival material that resembles a loose visual grammar of the present. It includes art historical reproductions, pictures from fashion, music and popular magazines, his own photographs and much more. The artist draws on this archive for his work, choosing elements from it according to associative and formal criteria. His motifs range from houses and other kinds of architecture to landscapes, typographic letters, playing cards, portraits, still lifes and Japanese manga. Afterwards he submits them to an ambivalent, constantly self-recalibrating process of sketching, photographing and reworking that radically erases the elements’ content-specific references and traces of its origin, consequently arriving at what the artist has called “the edge of an invention.” The resulting images neither mimetically represent anything nor are they purely symbolic or abstract. Instead, they appear as autonomous entities that are at once figure and form, object and sign. Scheibitz explores an interface that few would have thought existed—a realm between autonomous composition and barely-recognizable reference to reality, between figuration and abstraction.

The artist shows similar rigor in his dismantling of the conventional distinction between painting and sculpture. Here, too, he skillfully allows the two antagonistic poles to collapse into one another. On the whole his paintings convey the impression of objecthood, while his sculptural objects seem oriented towards pictorial visual space. His works in both media are products of an act of transformation that radically intertwines the two- and three-dimensional and is apparently aimed at the creation of an intermediate space between image and object.

The repertoire of recurring, yet varying biomorphic and constructivist forms in the artist’s works can sometimes seem like an indecipherable system of signs. The work creates an illusion of order only to destroy it at the same time. This ambiguous evocation of sign and order systems is not an aesthetic end in itself, but rather an expression of the artist’s interest in the idea of the index and in the explanatory, analytical and coding systems we use to decipher the world—most visibly the alphabet, the periodic table of elements or mathematical symbols. In a parallel layer of meaning the works’ titles often reference scientists, musicians, authors, places or events that are related to the various systems and hold significance for the artist’s conceptual work.

Thomas Scheibitz’s works exude something enigmatic and often hold an extraordinary pull. Though he introduces subject matter into the work, the pictures resist narration of any kind. Long vanishing lines and chromatic gradations suggest pictorial space, yet also tip into radical flatness. A rigorous painting style meets post-gestural smears of color, graphic and sculptural impulses. His work can in some respects be understood as a tightrope walk—a dazzling, extraordinary path between mimesis and inventive construction, sense and non-sense, contemporaneity and timelessness.

Raum für phantasievolle Aktionen
Group Exhibition
Kunstmuseum Bonn
Through January 31, 2024
On the 30th anniversary of its presence along the Museum Mile, the Kunstmuseum Bonn is offering a comprehensive view of its collection of contemporary art, which is being freshly presented from new perspectives in twenty rooms. Even if the presentation shows the Kunstmuseum to be a special site for painting, fundamental roles in the argumentation are nonetheless played by installation, film and photography.

Monika Sprüth and Philomene Magers are pleased to announce the solo exhibition Satellitensaal by Thomas Scheibitz at Sprüth Magers Window in Berlin. The exhibition title is a neologism and – as is often the case with Scheibitz – stands for concepts and things that are incompatible as such, yet held together by a concurrent poetic or artistic level.

Black Swan is Thomas Scheibitz's first solo exhibition at the London gallery since 2010. In a practice that creates intrigue through a movement between the precipices of figuration and abstraction, Scheibitz looks to this liminal space, drawing from both art historical references and his vast archive of printed material to offer a complex visual of our time. The definition of the term and the exhibition title Black Swan describes a singular event that occurs unexpectedly, typically an occurrence that is considered to have a low probability but high impact, and only in hindsight is determined to have in fact been predictable. Thus, the title of the exhibition is a metaphor for the present time as well as for painting or the painting itself.

As part of the exhibition parcours Mies In Mind, initiated by INDEX Berlin and taking place on the occasion of the reopening of the Neue Nationalgalerie, Sprüth Magers is showcasing works by John Bock, Thomas Demand, Thea Djordjadze, Jenny Holzer, Reinhard Mucha, Otto Piene, Thomas Ruff and Thomas Scheibitz in a group exhibition that pays tribute to the architect Ludwig Mies van der Rohe and his famous building.

Over the last two decades, Thomas Scheibitz has developed a distinct visual vocabulary that moves seamlessly between figuration and abstraction. Informed by the systems and codes that structure both the world and our understanding of it, his paintings and sculptures present complexly layered, tectonic spaces in which forms and figures hang in careful balance with one another. Sprüth Magers is pleased to present the German artist’s first solo exhibition in Los Angeles since 2001, featuring a selection of recent works that display the breadth of subjects, references, and visual tropes which circulate within the artist’s wide-ranging practice.

Already in the title of the exhibition Radiopictures, Thomas Scheibitz demonstrates that his artistic thinking, in addition to tectonics, scale, and proportion, also revolves around time-based media: music, film, text. Temporal aspects, such as simultaneity and continuum, are for him further dimensions of composition.

For his new exhibition at Sprüth Magers Berlin, Thomas Scheibitz has devised a specific configuration of works for the gallery space, which he has further transformed by incorporating a column into the existing architecture. This sculptural intervention with the coated pillar alters the perception of the space and historicises its basic structure. A similar interaction between painterly surfaces and three-dimensional volumes is set in motion in object-based works such as the sculpture Terrasse (2011) or the relief If Seven was Nine (2011): by deploying the materiality of rust – a product of corrosion – or the haptic qualities and structure of coloured fabric, Scheibitz uses untypical materials to imitate monochrome painting and its distinctive surface properties.

Sharp lines, interlocking diagonals, triangular shapes and grid framework make up the artistic vocabulary of Thomas Scheibitz, all of which are clearly visible in his frieze of works on paper entitled A moving plan B, 2010.

The repetitive application of the vivid red, blue, yellow and green reveals how the artist pursues a reduction of form through the use of intertwining flat planes of colour. When encountering A moving plan B, 2010, the viewer is presented with a completed work which has progressed from preliminary sketches, drawings and photographs, all of which are used by the artist to construct a ‘storyboard’ or plan for a new series of work.

In this exhibition Thomas Scheibitz has devoted himself exclusively to sculpture and the sculptural surface. A configuration of around thirty objects marks out the exhibition space in a field-like arrangement and shows possible areas of interaction between the autonomous sculpture, its arrangement in space and concepts such as scale and proportion.

The sculptural composition within the gallery space is directly related to the title of the exhibition. In astronomy, the ‘Goldilocks Zone’ describes a habitable zone of space – an active region where the surface of every planet fulfils the minimal conditions necessary for life.

With the paintings, sculptures and one wall relief which are shown under the exhibition title Casa Amalia Index, Thomas Scheibitz broaches the issue of a not exactly defined boundary: between painting and sculpture, between architecture and fine arts, between recognizability of form and fiction. Thus the artist's works refer to an intermediate zone in which an own pictural world arises by a new definition of form.